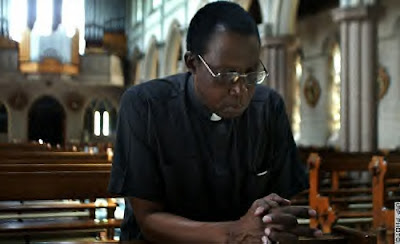 Archbishop Pius Ncube at the Catholic Church in Bulawayo, Zimbabwe

The Times has a report on the growing unrest and anarchy in Zimbabwe where the regime of Robert Mugabe is still clinging to power.

Archbishop Pius Ncube of Bulawayo added to the pressure on Mr Mugabe yesterday. Sensing his growing vulnerability, he called on Zimbabweans to “stand up and fill the streets and demand this man stand down”. He promised to take the lead, declaring: “The pastors must be the ones in front of the blazing guns.”

Archbishop Ncube added to [Mugabe`s] problems yesterday with his bold declaration at a meeting organised by the Zimbabwe Christian Alliance. The gangly, loose-limbed Archbishop had prefaced his remarks during a twilight interview with The Times earlier this week in a small garden next to his cathedral. “If we can get 30,000 people together even Mugabe’s army would not be able to control it,” he said, and indicated that he was thinking of stepping into the leadership vacuum caused by infighting within the opposition Movement for Democratic Change (MDC).

Yesterday he did so. “It’s time for a radical stance, not soft speeches and cowardice,” Archbishop Ncube, 60, declared to cheers from the assembled clerics. “I am willing to stand in front. The time is now.”

Given the desperation of the people it is just possible someone such as Archbishop Ncube could provide the spark that sets Zimbabwe ablaze. The Archbishop’s promise to lead “changes the whole scope of the crisis, and gives the struggle a new dimension”, Eldred Masunungure, a political scientist at the University of Zimbabwe, said.

The Archbishop was well known domestically and internationally. It would be hard for the regime to “bash” him. “He is emerging in the mould of [Desmond] Tutu. We need a Tutu in Zimbabwe,” Mr Masunungure said, referring to the Archbishop Emeritus of Cape Town.

Mr Mugabe is a great survivor, and even his fiercest critics concede that he is a brilliant tactician. They also know that he will stop at nothing to retain power, and predict that things could become even worse before they get better. “Unfortunately it may come to bloodshed,” Archbishop Ncube told The Times. “People are upset now. They are angry. If they burn cars Mugabe will resort to shooting. He will do anything for power."
Posted by Unknown at 5:51 am