Dispute on the Trinity 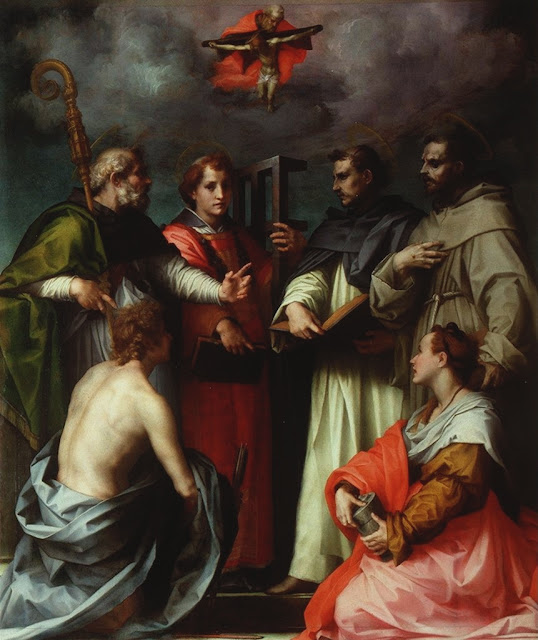 The Peri family had distinguished itself in republican service. The so called "inventor" of opera Jacopo Peri (1561 - 1633) was (to be) a member of this family

In 1529 when the church was destroyed in the Siege by Charles V,  it was transferred to the Church of San Jacopo de' Fossi in Florence where it stayed for about 100 years before falling into the ownership of the Medici family

The models for the work are two works by Raphael: The Disputa of the Eucharist (1508) in the Stanze Vaticane and his Ecstasy of Saint Cecilia (1514)

Del Sarto produced two other works for this Church: the Annunciation and Noli me tangere (1510)

One sees the Trinity and a variety of saints of different times, situations and backgrounds but all of major importance

“If you see charity, you see the Trinity”

As Pope Leo XIII said (see below),  the worship paid to the saints and angels, to the Mother of God, and to Christ Himself, finally redounds to the honour of the Blessed Trinity.

In Divinum Illus Munus, (1897) Pope Leo XIII with reference to St Augustine tried to explain some aspects of the Catholic Doctrine of the Trinity:

"The Catholic Doctrine of the Blessed Trinity

3. Before We enter upon this subject, it will be both desirable and useful to say a few words about the Mystery of the Blessed Trinity.

This dogma is called by the doctors of the Church "the substance of the New Testament," that is to say, the greatest of all mysteries, since it is the fountain and origin of them all. In order to know and contemplate this mystery, the angels were created in Heaven and men upon earth. In order to teach more fully this mystery, which was but foreshadowed in the Old Testament, God Himself came down from the angels unto men:

"No man bath seen God at any time; the only begotten Son, who is in the bosom of the Father, He hath declared Him" (John i., 18).

Whosoever then writes or speaks of the Trinity must keep before His eyes the prudent warning of the Angelic Doctor:

"When we speak of the Trinity, we must do so with caution and modesty, for, as St. Augustine saith, nowhere else are more dangerous errors made, or is research more difficult, or discovery more fruitful" (Summ. Th. la., q. xxxi. De Trin. 1 L, c. 3).

The danger that arises is lest the Divine Persons be confounded one with the other in faith or worship, or lest the one Nature in them be separated: for

"This is the Catholic Faith, that we should adore one God in Trinity and Trinity in Unity."

Therefore Our predecessor Innocent XII, absolutely refused the petition of those who desired a special festival in honour of God the Father. For, although the separate mysteries connected with the Incarnate Word are celebrated on certain fixed days, yet there is no special feast on which the Word is honoured according to His Divine Nature alone.

And even the Feast of Pentecost was instituted in the earliest times, not simply to honour the Holy Ghost in Himself, but to commemorate His coming, or His external mission.

And all this has been wisely ordained, lest from distinguishing the Persons men should be led to distinguish the Divine Essence. Moreover the Church, in order to preserve in her children the purity of faith, instituted the Feast of the Most Holy Trinity, which John XXII. afterwards extended to the Universal Church.

Many facts confirm its truths.

The worship paid to the saints and angels, to the Mother of God, and to Christ Himself, finally redounds to the honour of the Blessed Trinity. In prayers addressed to one Person, there is also mention of the others; in the litanies after the individual Persons have been separately invoked, a common invocation of all is added: all psalms and hymns conclude with the doxology to the Father, Son, and Holy Ghost; blessings, sacred rites, and sacraments are either accompanied or concluded by the invocation of the Blessed Trinity.

This was already foreshadowed by the Apostle in those words:

thereby signifying both the Trinity of Persons and the Unity of Nature: for as this is one and the same in each of the Persons, so to each is equally owing supreme glory, as to one and the same God.

The Church is accustomed most fittingly to attribute to the Father those works of the Divinity in which power excels, to the Son those in which wisdom excels, and those in which love excels to the Holy Ghost. Not that all perfections and external operations are not common to the Divine Persons; for "the operations of the Trinity are indivisible, even as the essence of the Trinity is indivisible" (St. Aug., De Trin., I. 1, cc. 4-5); because as the three Divine Persons "are inseparable, so do they act inseparably" (St. Aug., i6.).

But by a certain comparison, and a kind of affinity between the operations and the properties of the Persons, these operations are attributed or, as it is said, "appropriated" to One Person rather than to the others.

In this manner the Father, who is "the principle of the whole God-head" (St. Aug. De Trin. 1 iv., c. 20) is also the efficient cause of all things, of the Incarnation of the Word, and the sanctification of souls; "of Him are all things": of Him, referring to the Father.

But the Son, the Word, the Image of God is also the exemplar cause, whence all creatures borrow their form and beauty, their order and harmony. He is for us the Way, the Truth, and the Life; the Reconciles of man with God. "By Him are all things": by Him, referring to the Son.

The Holy Ghost is the ultimate cause of all things, since, as the will and all other things finally rest in their end, so He, who is the Divine Goodness and the Mutual Love of the Father and Son, completes and perfects, by His strong yet gentle power, the secret work of man's eternal salvation. "In Him are all things": in Him, referring to the Holy Ghost."

Posted by Unknown at 6:22 pm No comments: 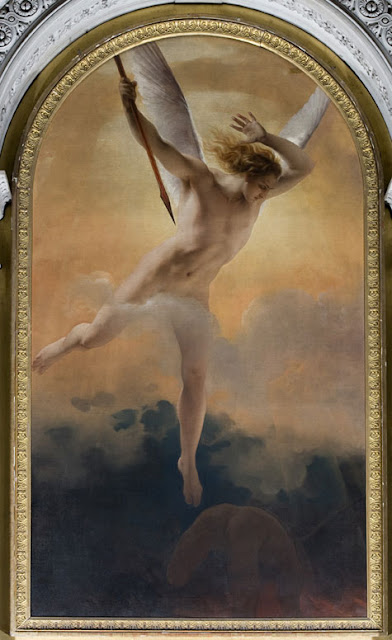 His Romantic leanings come out mainly in subject-matter rather than in technique,

He trained in Rome in the circle of Canova and Ingres.

He painted religious, historical, and mythological works in a vein owing something to Delacroix and Delaroche, and Ingres

Ferrari wrote of the picture of St Michael:

Below is the depiction of the Gospel of John (8: 3-11) in what might appear to be somewhat in the style of the German Nazarenes: 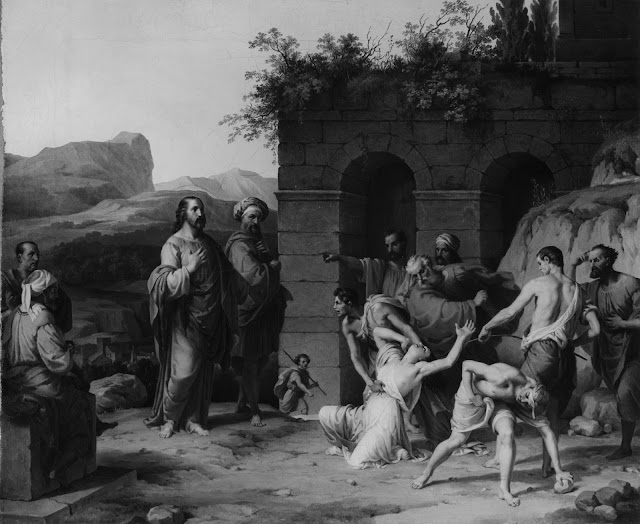 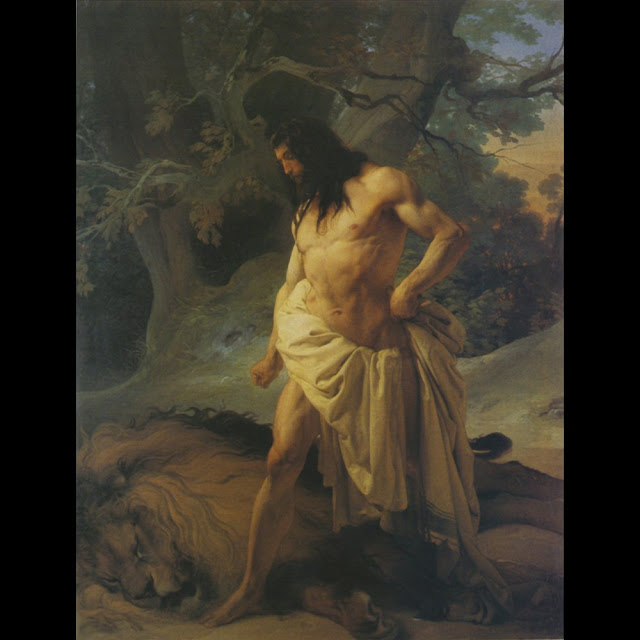 
The full title of the work is:

Uboldo was a patron of Hayez. He was a soldier under Napoleon and then under the Austrians

The work has a martial feel

The last religious masterpiece by Hayez was one of Christ in the Passion: 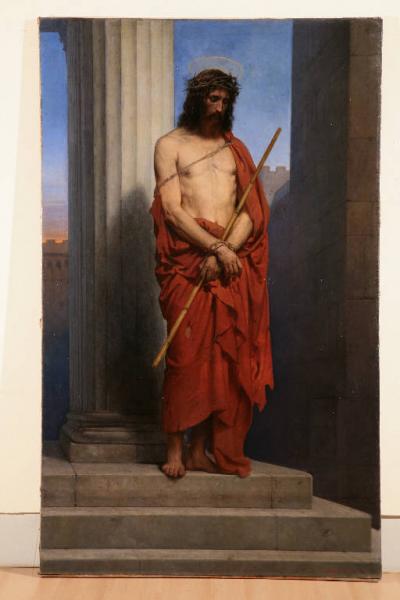 
It was done while not in good health

However it was point of honour to complete it

He had promised his grandson 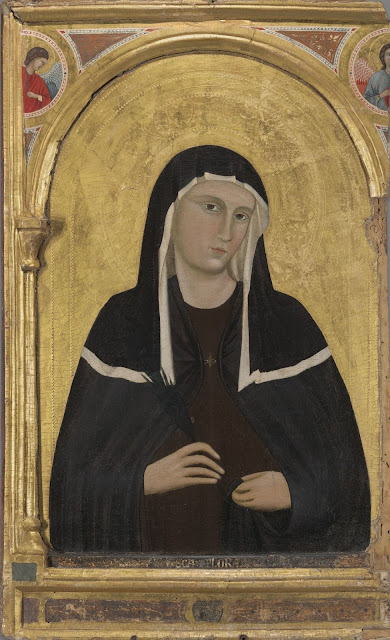 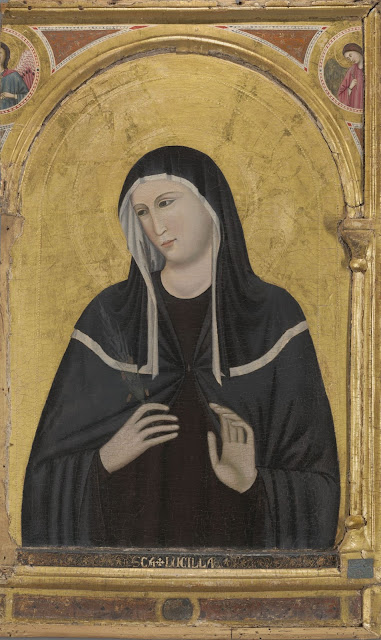 They were two sisters who were virgins who were martyred along with Eugenius, Theodore, Antonius  and another 18 companions

About AD 851 their relics were taken from Ostia to Arezzo by John, Bishop of Arezzo where he placed them in a Benedictine abbey

The presbytery is dominated by the monumental altar built by Vasari (a native of Arezzo) for the chapel of his family in the parish church of Santa Maria in 1563 and moved here in 1865.

A masterpiece of baroque artifice is the false dome, painted on canvas by the celebrated Jesuit brother Andrea Pozzo (1642-1709)  in 1702 and placed above the main altar

In the 9th century their stories were memorialised in The Passio. however it simply copies verbatim the stories of other saints and martyrs with some insignificant changes

The relics are still in the Badia but housed in the altar dedicated to  Saint Rita.

Here is a Mannerist version of the Baptism of St Lucilla by St Valentine by da Ponte: 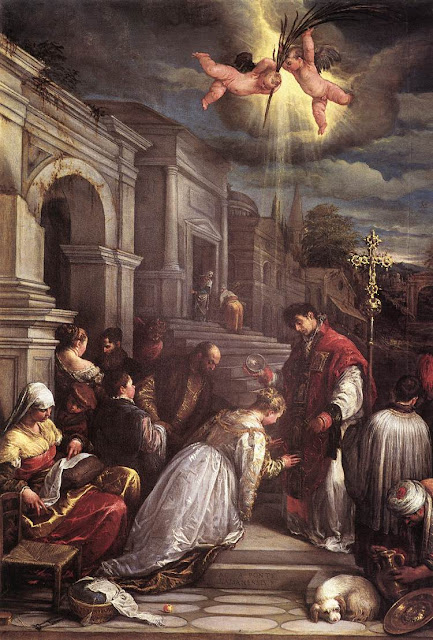 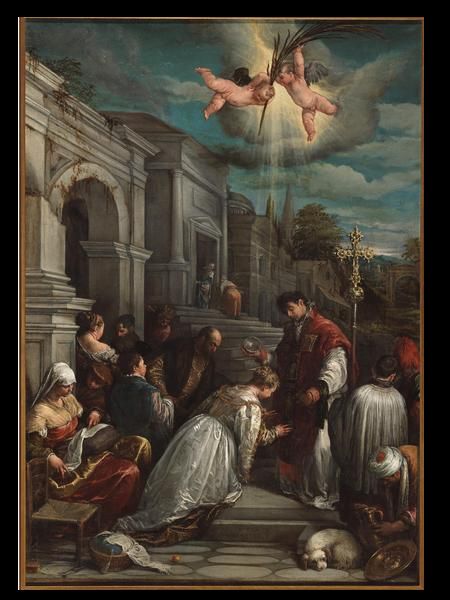 On being baptised her sight is restored

Valentine and Lucilla are subsequently martyred

By the early 1560s Bassano freed himself from Mannerist preoccupations, returning to a new objectivity and classicism with compositions based upon the unifying power of light.

In Baptism we become Children of God, the brothers and sisters of Christ, the Light of the World

A religious man and a painter of many religious works, da Ponte is said to have stated:

"Sono di fede et religione cristiana, e chi si ingana, suo dano” ("I am of the Christian faith and religion, and if somebody believes the contrary, he is wrong and it is his problem")

Posted by Unknown at 9:03 pm No comments:

It has many treasures

This cassone is but one

A cassone (or forziere) was a type of decorated wooden dowry chest  from central Italy, used extensively from the end of the fourteenth, through the fifteenth and sixteenth centuries.

It took about a month to paint a cassone front

According to Vasari, the Florentine Apollonio di Giovanni di Tomaso (1414 – 1465) specialised in the painting of such cassoni

Their decoration changed from painted design in the fifteenth and early sixteenth centuries to carving (sometimes partially gilt) in the second half of the sixteenth century.

This cassone  depicts the descent of the Holy Spirit at the First Pentecost or Whitsunday as described in the Acts of the Apostles, 2: 1–4.

"1 When the time for Pentecost was fulfilled, they were all in one place together.

2 And suddenly there came from the sky a noise like a strong driving wind, and it filled the entire house in which they were.

3 Then there appeared to them tongues as of fire, which parted and came to rest on each one of them.

4 And they were all filled with the Holy Spirit and began to speak in different tongues, as the Spirit enabled them to proclaim"

However there are some differences

The tongues of fire are not yet on the people assembled

The scene is the one before the first proclamation (or kerygma) by St Peter of the messianic significance of the death and resurrection of Jesus:

"Exalted at the right hand of God, he received the promise of the Holy Spirit from the Father and poured it forth, as you (both) see and hear ...

Therefore let the whole house of Israel know for certain that God has made him both Lord and Messiah, this Jesus whom you crucified."

Posted by Unknown at 7:41 pm No comments: