A decree from Caesar Augustus 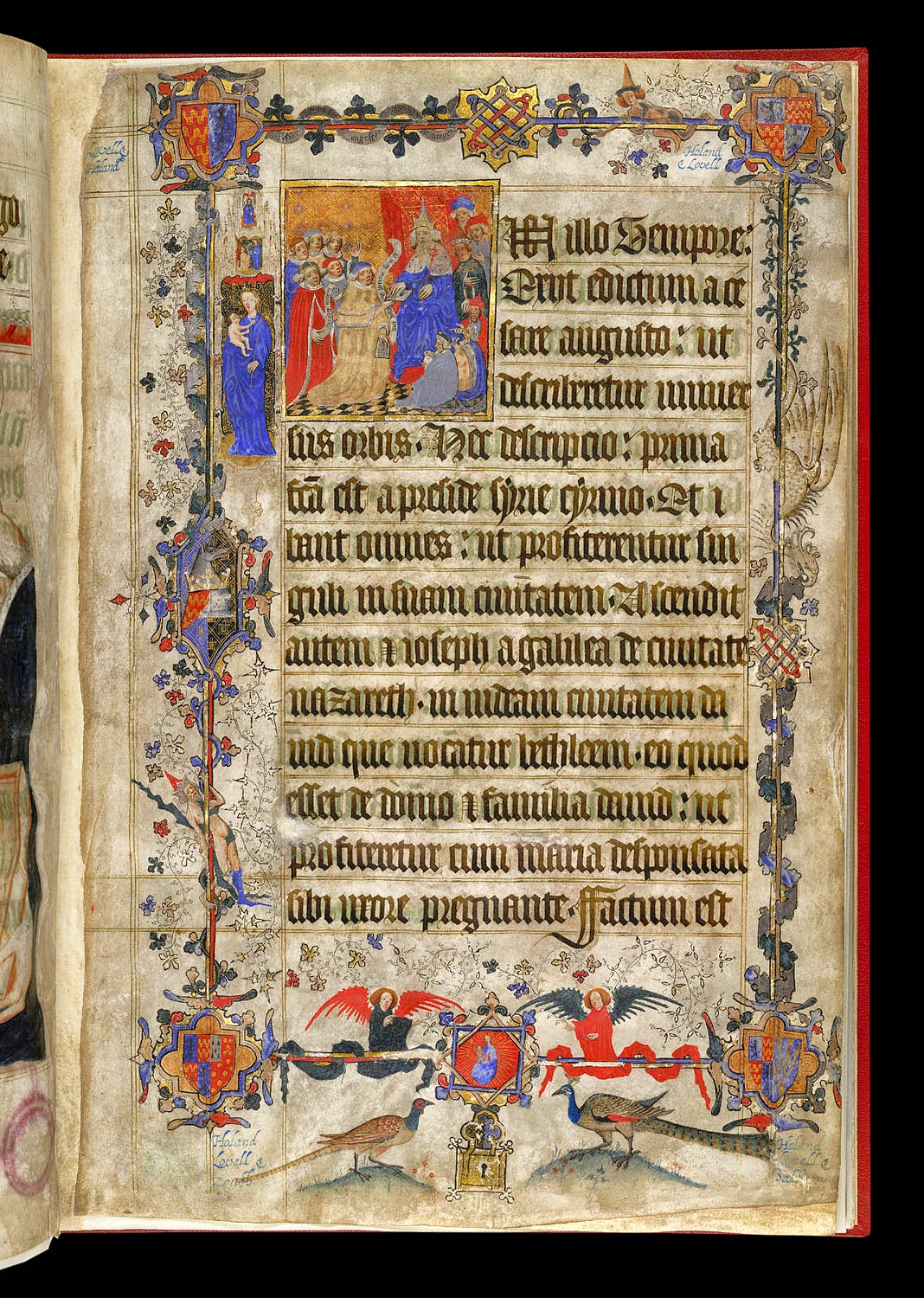 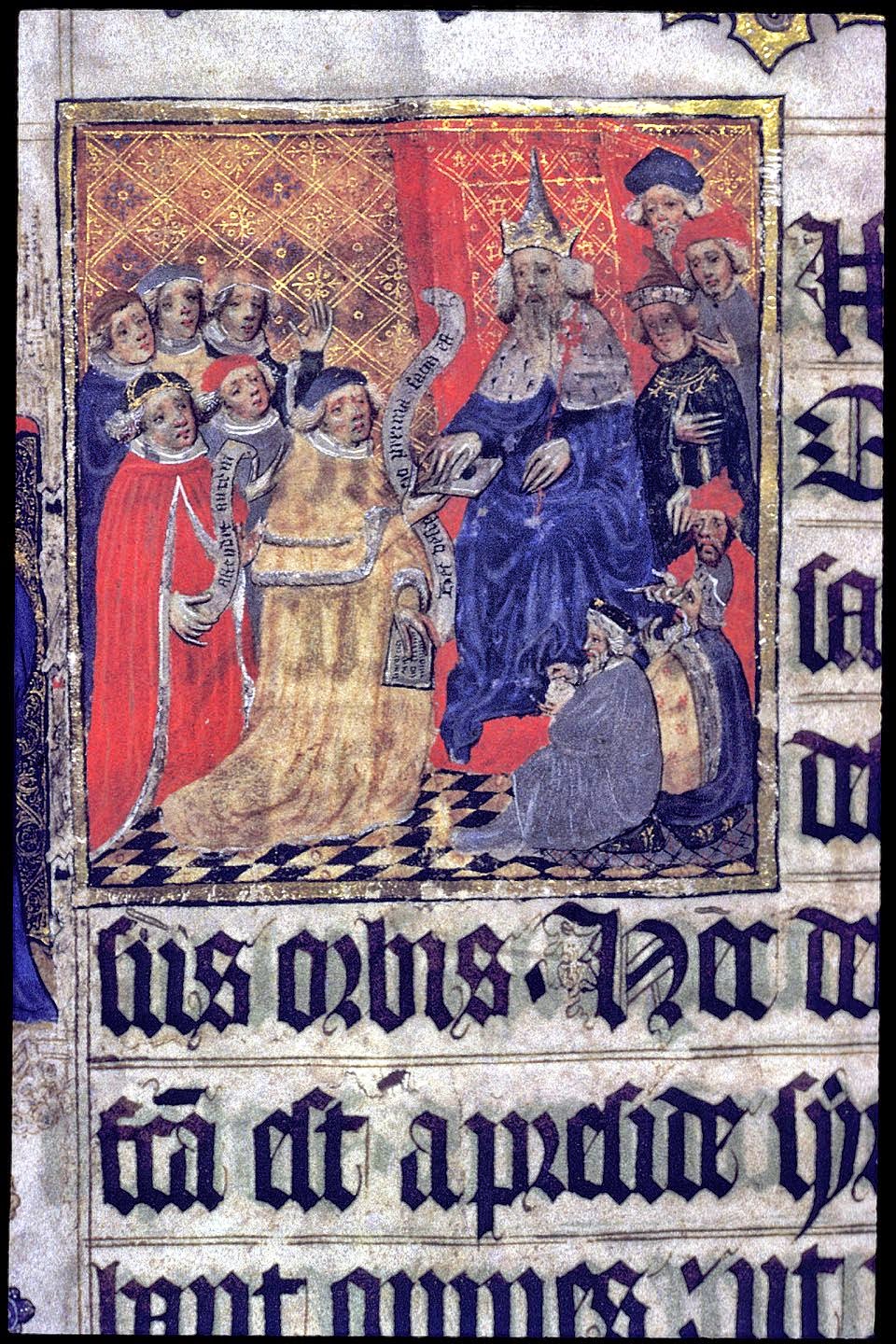 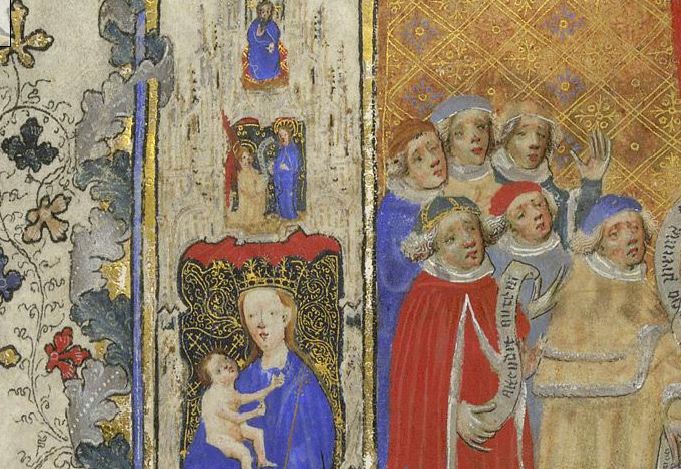 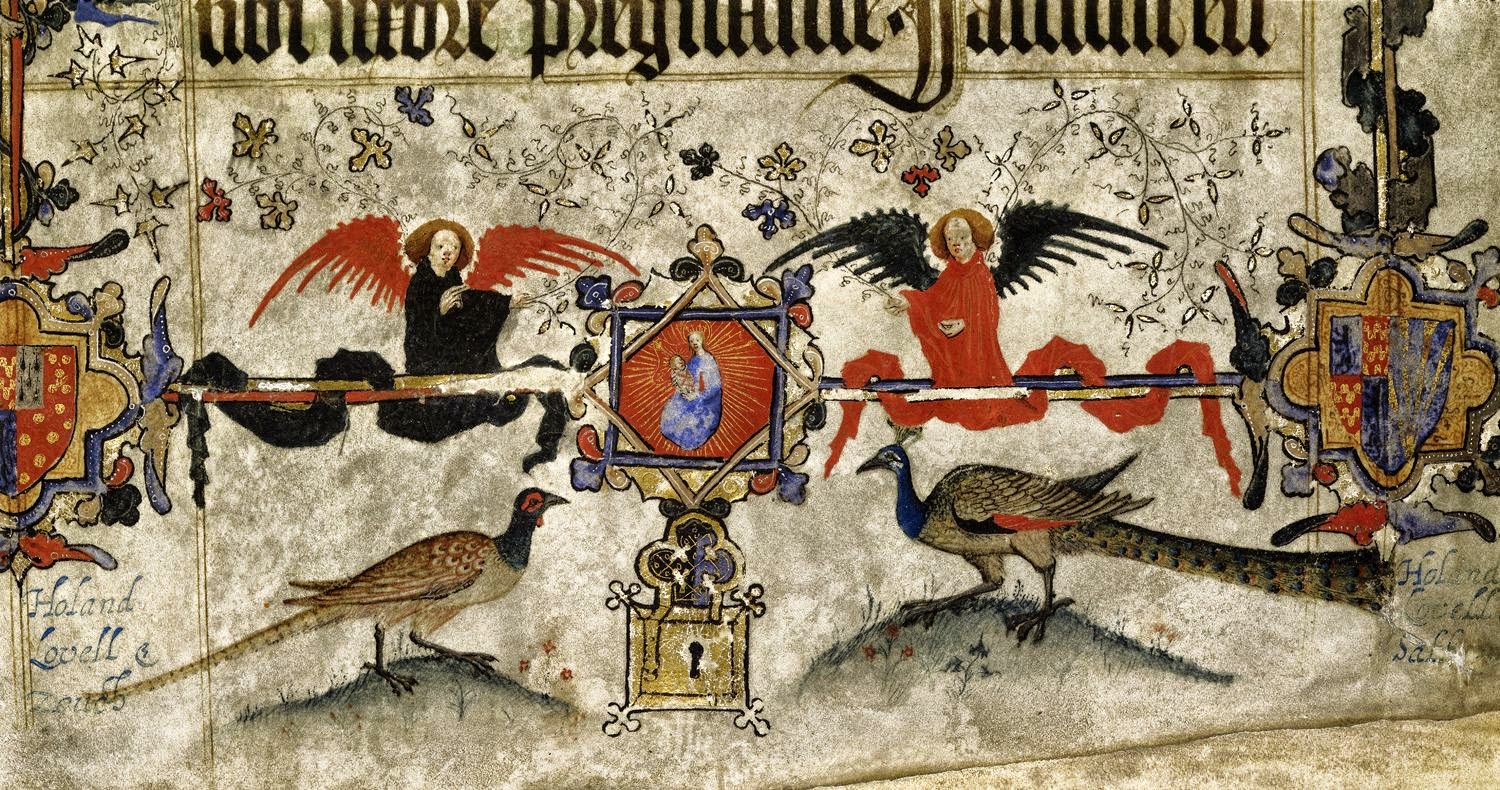 John Siferwas (c.1360 -  c.1430)
Historiated initial of Caesar Augustus issuing an edict, with courtiers, at the beginning of the reading for Christmas with a passage from the Gospel of Luke (2:1-14): 'And it came to pass that in those days there went out a decree from Caesar Augustus that the whole world should be enrolled . . .'
From The Lovell Lectionary
Between c. 1400 and c. 1410
Harley 7026   f. 5
The British Library, London

John,  the fifth Lord Lovell of Tichmersh (near Thrapston in Northamptonshire), (d 1408) commissioned the Lectionary  as a gift to Salisbury Cathedral

The work was commissioned for the benefit of his soul and that of his wife. The text prays:

He commissioned Siferwas,  a Dominican friar

Here we see Lovell receving the book from the artist: 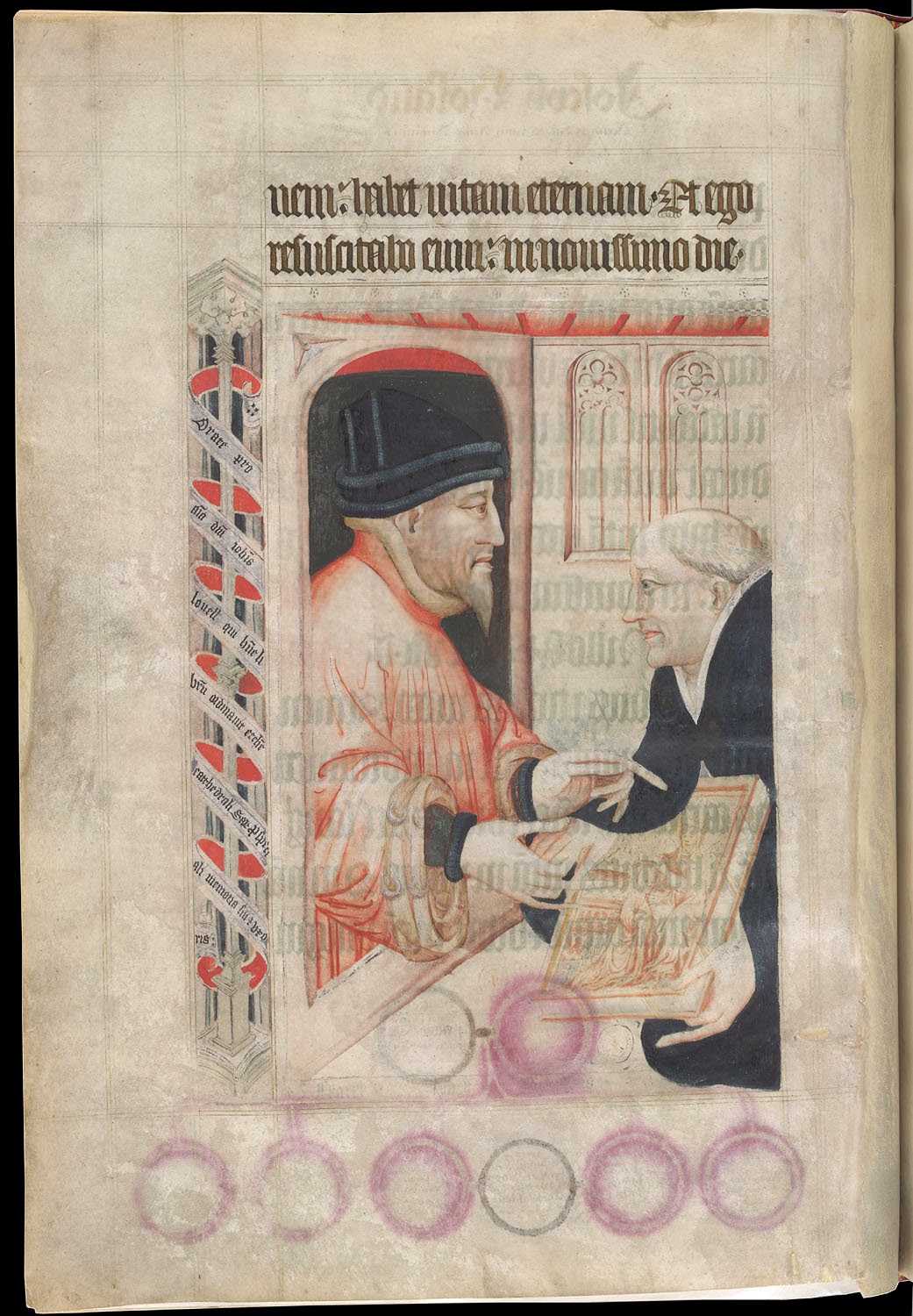 
This work  is why Siferwas  is credited with having painted the earliest naturalistic self-portrait in England.

Here we see that fourteenth-century manuscripts were actually executed in England by  English artists using an English variation of an International artistic style: the International Gothic

Siferwas is the first English illuminator whose career can be followed to some extent through documentary references and signed works.

He was ordained an acolyte at Farnham in 1380, and went on to enter the Dominican friary at Guildford.

He was ordained a priest in London in 1382 and he probably trained as an artist there. All his known work was done for religious houses in the south-west of England.

His most important manuscript is the Sherborne missal (c.1405, BL, London), a very large and sumptuous book made for Sherborne Abbey, Dorset. It is a masterpiece of the International Gothic style

In 1427 he seems to have been resident in Somerset

First the passage was read literally, in its historical context, the Literal or Historical sense.

Second, the passage was taken to have a symbolic meaning, the Typological or Allegorical sense.

Then the spiritual meaning was discerned in terms of moral behaviour, the Moral or Tropological Sense followed by the Eschatological, Mystical or Unitive Sense that incites hope for transforming union in this life and final fulfilment in the beatific vision. See Michael Casey. The Art of Sacred Reading. North Blackburn: Dove, 1995, 54.

The passage in Luke describes how an edict came from the most important and powerful man in the known civilised world: the Roman emperor and his acolytes are depicted in 15th Century dress

It was to be enrolled in obedience to the edict  that Mary and Joseph went to Bethlehem.

On the left we see half naked king beseeching mother and child in the afterlife. A parable like Dives et Lazarus

We see the Annunciation. Mary is at the heart of the process of the IncarnationL how the Word became flesh

She has an ornate crown on her head and a glowing sun at her heart, reminiscent of the woman clothed with the sun with a crown of twelve stars on her head described in the Book of Revelation (Rev 12:11)

A male and female peacock symbolising light, immortality and the joy of the afterlife give expression to human hope.

As depicted six hundred years ago, may you have a holy and blessed Christmas

Posted by Unknown at 8:47 pm No comments: 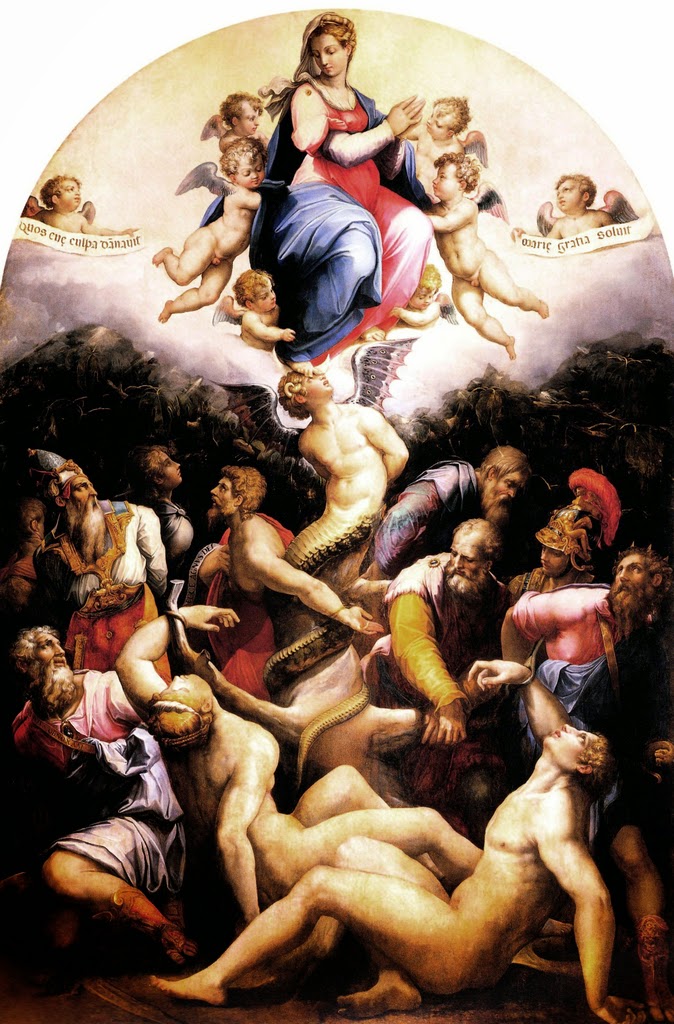 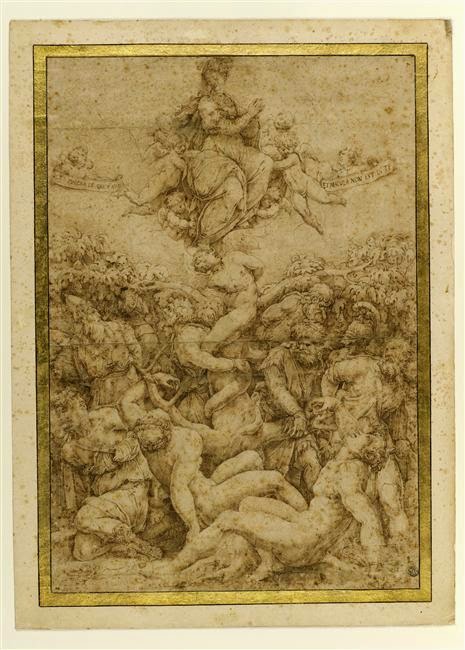 Posted by Unknown at 8:58 pm No comments: