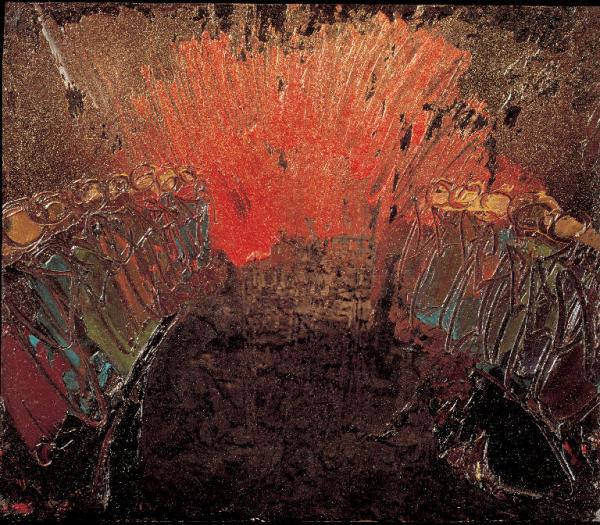 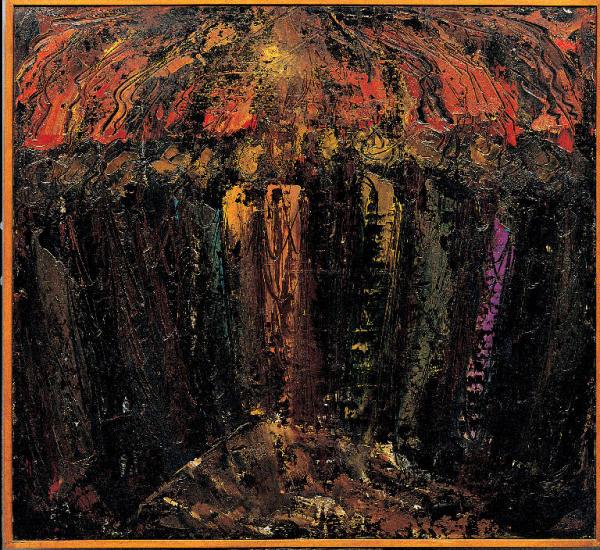 The American artist William Grosvenor Congdon (1912 - 1998), converted to Catholicism in 1959 in Assisi. His corpus of religious art works is substantial

His work lives on through The William G Congdon Foundation

The Knights of Columbus Museum presently has an exhibition of his work entitled The Sabbath of History: William Congdon | Meditations on Holy Week

Fifty years ago, Life magazine hailed him as one of the most talented and successful painters in America.

Then, mysteriously, he dropped out of the art world and was forgotten for more than thirty years

The Trappist monk Thomas Merton, the Jesuit Martin D'Arcy and the French philosopher Jacques Maritain were very interested in Congdon

Communio has over the years printed a number of articles on Congdon, his conversion and his works:

William Congdon. The Birth of the Image (1997)
Rodolfo Balzarotti. Art and Forgiveness (1997)

In October 1963, the Servant of God, Dorothy Day visited Italy and visited among others Milan and Assisi.

On her travels she encountered William Congdon and Don Luigi Giussani. She wrote

"When I was in Milan last May I spoke to the university students and Bill Congdon translated my talk. The meeting was held after a Sunday morning Mass at the Church of St. Anthony, Abbot, when the transepts, and the body of the church were packed with students who began their worship with Prime. it was thrilling to hear the old Latin hymns. The Mass was in the Ambrosian rite and the students sang the Gelineau psalms.

A meeting later was held in the Cardinal Shuster School in the paved and roofed-over cloister. It had been made into a large meeting hall, and the imposing rostrum was presided over by a plaque of Ozanam who also started his apostolate as a student and continued it as a teacher and married man. Our own Bishop Wright of Pittsburgh spoke about Ozanam as a model for young men in a talk he gave before the Newman Clubs of the United States.

It was easy for me to speak, thanks to that plaque, because it kept me in mind of the spiritual and corporal works of mercy, which all Catholic students understand and which are all-embracing in the intellectual or manual labors which are before them. Within the colonnades of this cloister there are great paintings from the lives of the saints, eight or ten feet high and over the plaque of Ozanam a Byzantine crucifix. I was surprised to see how pervasive was the Byzantine influence in the art of Italy, but I should not have been, considering the pre-Christian and post-Christian influence of the Greek civilization.

This meeting went on all morning and I was impressed again at the patience of the Italians, as I had been on the trains especially, which are always overcrowded (though they run on time).

The students were intent and disciplined during this long meeting. Don Luigi Guisanni is the inspiration of this work among the youth of Milan. They are given the best in intellectual and spiritual leadership and Don Guisanni is not afraid of taking their time, asking all, demanding search, research, more meetings, preparation for that moment, that opportunity, that choice which will affect their entire lives. All this emphasizes the need to intensify their prayer life.

The meetings stimulate their minds, inflame their hearts. Out of the fullness of the heart the mouth speaketh. There cannot be too many words of this kind, words that crowd out frivolities. Read, study. "Wisdom is the most active thing."

Meanwhile, as Don Guisanni spoke, Bill was writing out the translation.

Bill Congdon at previous meetings had spoken to them--he is fluent in Italian and they responded to his warmth, to what Jacques Maritain called his "strangely deep douceur, his defenseless candor, a vulnerability to any spiritual arrow, either the arrow of distress in this world and of that beauty which wounds the senses, or the arrows of the supramundane shores."

The fact that I was introduced by him and interpreted by him made my welcome a warm one.

I have before me now as I write, In My Dise Of Gold -- Itinerary to Christ, with "presentations" by Jacques Maritain, Father M. C. D’Arcy and Thomas Merton, published by Reynal and Company, New York.

It is a book of plates of Congdon’s paintings produced in color and in black and white, beginning with a black and white of Stanton Street, right off the Bowery where he lived for a time right after the war.

During the war he had served with the American Field Services, as a few of our editors had also and for a time afterward he returned to Europe to do relief work. When he lived on Staton Street he wrote in his own account of his conversions which is printed in this remarkable book: "At that time I could no longer face the comfort, security, the thinking and living by tradition to which I was born and had been accustomed. I went to live in a one room, cold water flat for seventeen dollars a month just off the Bowery."

Staton Street is just around the corner from the Catholic Worker.

"I did not paint as I had studied, reproducing the object through an art of illusion; I painted the image of the object that rose up within me as emotion, that impelled me to paint, in its own time, not mine. This was my first conversion in 1948. The tenement facades began to bloom within me, to grow into an image that palpitated with multiple suffering within them; and within me no doubt as well. Blocks of identical tenements, identical miseries repeated street after street as I had seen them repeated in dressing stations in the war, in hospital corridors, and in the numbered huts of concentration camps. The Bowery, Staton Street, Mulberry Street, Spring Street."

He went back to Italy which he loved, and went to Assisi for the first time in 1951. The Byzantine crucifix which spoke to St. Francis spoke to him too in another way. He began to read The Little Flowers of St. Francis. One of my favorite stories in The Fioretti is "This then is perfect joy." For the eight years which preceded his conversion he was never separated from this book.

And then "a stranger" drew him from his solitude and introduced him to the Pro-Civitate Christiana "where he was given a greeting of such affection that he could not forget it."

Don Giovanni Rossi, founder of the association, and friend of Pope John XXIII, asked him in all simplicity if he was thinking of becoming a Catholic. He ran away at this point.

"I travelled rapidly and constantly, seeking in the redemptive symbols of others substitutes for my own salvation."

He went to India, to Greece, to Egypt. To the island of Santorin in the Aegean sea and to the desert of the Sahara. Eight years later he returned to Assisi, to Don Giovanni, and in August 1959 he became a Catholic.

He took a small house in Assisi, 600 years old in an olive and fig orchard, and I visited him there. Sally Douglass and I were his guests at the Pro Civitate Christiana, and it was from there that we went to the students at Milan.

There is much more to William Congdon’s story than these short paragraphs. His book tells much more, besides giving reproductions of his paintings. His paintings are found in the Whitney Museum of American Art, the Metropolitan Museum of Art, Museum of Modern Art, the Duncan Phillips Gallery and the Betty Parsons Gallery."

The Discovery Of Saint Clare 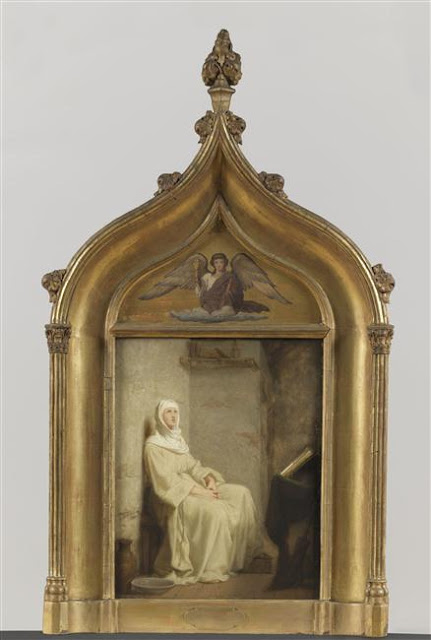 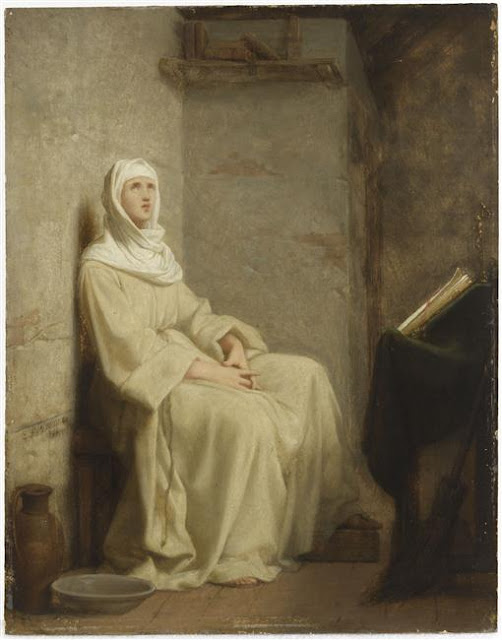 Tragically typhoid killed Bénouville at the age of thirty eight. His artistic career was cut short and one of the great French historical painters was not able to fulfil the promise which his contemporaries thought that he would

His works are historical as well as religious.

A revival of interest in the saint followed

The painting is an example of that revival

Saint Clare is one of the great saints of the Church: she was the first woman in the Church`s history to compose a wriiten Rule for a community which was approved of by the Pope

Despite her seclusion and her being hidden, her goodness radiated to those outside and far and wide and has transmitted itself to future generations. More than six hundred years after her death, the re-discovery of her tomb could still excite the people of Assisi and far beyond

This year is also a Year of Saint Clare - a Clarian Year to celebrate the occasion of the eighth centenary of her “conversion” and consecration in 1211 or 1212. It took place on Palm Sunday.

"The solemn day of the Palms was at hand when the young woman went to the man of God to ask him about her conversion and when and how she should act. Fr Francis ordered her to go among the crowds on the day of the Feast at the Palm Sunday celebration, dressed elegantly and adorned with jewels. Then, the following evening, to leave the town, to convert the worldly joy into the mourning of Passion Sunday. So it was that when the Sunday came, among the other ladies the young girl radiant with festive light entered the church with them. Here, with fitting foresight, it happened that while the others hurried to receive their palms, Clare, out of shyness, stood motionless; so the bishop came down the steps to her and placed the palm in her hands” (Legenda Sanctae Clarae Virginis, n. 7: FF 3168).

This year on Palm Sunday 1st April 2012 the Pope addressed the Bishop of Assisi on the significance of the anniversary and the new Clarian Year.

He summarised the importance of her conversion thus:

"The profound meaning of Clare’s “conversion” is a conversion to love.

She was no longer to wear the fine clothes worn by the Assisi nobility but rather the elegance of a soul that expends itself in the praise of God and in the gift of self.

In the small space of the Monastery of St Damian, at the school of Jesus, contemplated with spousal affection in the Eucharist, day by day the features developed of a community governed by love of God and by prayer, by caring for others and by service.

In this context of profound faith and great humanity Clare became a sure interpreter of the Franciscan ideal, imploring the “privilege” of poverty, namely, the renunciation of goods, possessed even only as a community, which for a long time perplexed the Supreme Pontiff himself, even though, in the end, he surrendered to the heroism of her holiness"

See also his catechesis at General Audience on Wednesday, 15 September 2010 (Who was Clare of Assisi?)

Posted by Unknown at 9:48 pm No comments: