The Wisdom of St Thomas Aquinas 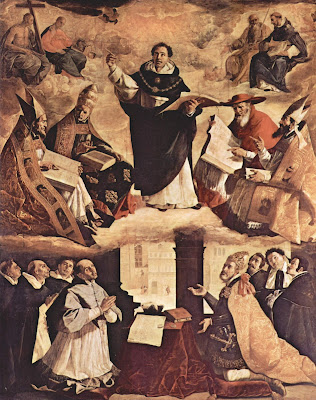 Not many of us have the time and/or the inclination to read the full works of St Thomas Aquinas. I mean, how and where do you start ? Yet he is one of the thirty-three Doctors of the Church, and he is considered by many Catholics to be the Church's greatest theologian.

In The Divine Comedy, Dante sees the glorified spirit of Aquinas in the Heaven of the Sun with the other great exemplars of religious wisdom. In 1567, Pope Pius V ranked the festival of St. Thomas Aquinas with those of the four great Latin fathers: Ambrose, Augustine, Jerome, and Gregory.

Aquinas's Summa Theologiae was deemed so important that at the Council of Trent, it was placed upon the altar beside the Bible and the Decretals.

In his Encyclical of 4 August 1879, Pope Leo XIII stated that Aquinas's theology was a definitive exposition of Catholic doctrine. Thus, he directed the clergy to take the teachings of Aquinas as the basis of their theological positions. Also, Leo XIII decreed that all Catholic seminaries and universities must teach Aquinas's doctrines, and where Aquinas did not speak on a topic, the teachers were "urged to teach conclusions that were reconcilable with his thinking."


English Catholic starts off with some very great quotations from The Angelic Doctor.
Posted by Unknown at 9:00 am