El Espolio: The Disrobing of Christ 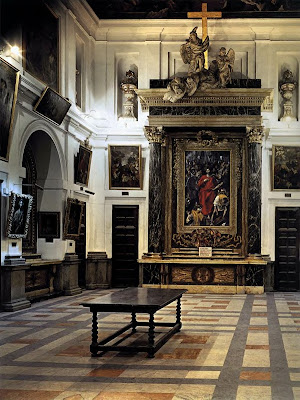 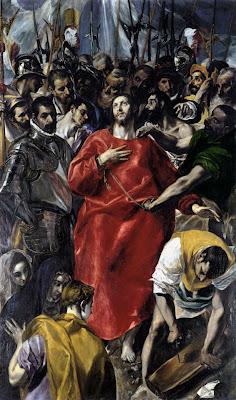 The carpenter is intent on the pressure of his hand

He doesn't sense perhaps that one of the hands
is held in a curious gesture over him--
giving or asking forgiveness?-
but he'd scarcely take time to be puzzled by poses
Criminals come in all sorts
as anyone knows who makes crosses
are as mad or sane as those who decide on their killings
Our one at least has been quiet so far
though they say he talked himself into this trouble
a carpenter's son who got notions of preaching

El Greco painted at least three versions of this theme.

The above image is the first and was commissioned by the Dean of the Toledo Cathedral, Diego de Castilla, to hang in the vestry there. For Espolio, El Greco designed the original altar of gilded wood which has been destroyed.

It is a vivid example of El Greco's synthesis of the anti-naturalism of Byzantine painting with Venetian coloration and Mannerist principles.

The Chapter of the Cathdral at first rejected the painting. They complained that Christ was being treated disrespectfully: some of the tormentors and torturers stand higher than He does. El Greco sued for his fee. The Court assessors unanimously praised the painting and supported El Greco`s claim. But it was a lesson that El Greco did not forget. It was Roman Catholic Spain in the period of the Counter-Reformation.

Although the canons of the Council of Trent regarding Art had been framed in broad terms, the devil was in the fleshing out of the details of the prescriptions and proscriptions set out by various learned authors and theologians. Artistic licence in religious art was in danger of being snuffed out.

The painting was moved about 1612 from the vestry into the re-modelled sacristy, and in the 1790s was inserted into a new frame, in which it can be seen today.

The powerful effect of the painting especially depends upon his original and forceful use of colour. Something of the effect of the grand images of the Saviour in Byzantine art is recalled.

A small, signed version of the Espolio, at Upton Park, Warwickshire, is probably the original preliminary model for the large painting. See below. 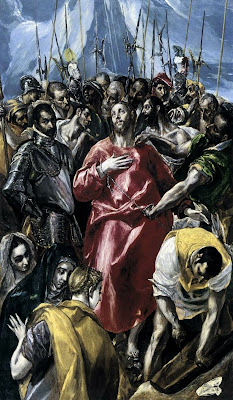 Another signed copy by El Greco now hangs in the Alte Pinakothek, Munich