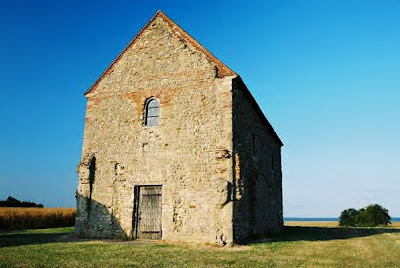 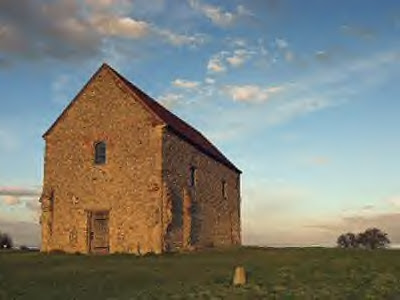 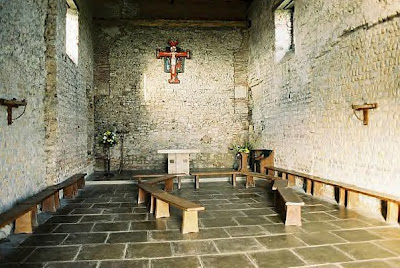 The Chapel of St Peter-on-the-Wall, Bradwell-on-Sea, Essex was built in 654 AD by St Cedd astride the foundations of the abandoned Roman fort of Othona.

From the 14th century it was used as a barn and consequently it likely retains its original Saxon form.

In 1920 it was restored as a chapel. It is now used by The Othona Community.

The Othona Community is an ecumenical Christian community which was founded in 1946 by an Anglican clergyman, the Revd. Canon Norman Motley to overcome the hatred which had its climax in the second world war.

The little that is known about Saint Cedd comes to us mainly from the writing of Saint Bede in his Ecclesiastical History Of The English People.

HOW THE EAST SAXONS AGAIN RECEIVED THE FAITH, WHICH THEY HAD BEFORE CAST OFF UNDER KING SIGEBERT, THROUGH THE PREACHING OF CEDD. [A.D. 653.]

AT that time, also, the East Saxons, at the instance of King Oswy, again received the faith, which they had formerly cast off when they expelled Mellitus, their bishop. For Sigebert, who reigned next to Sigebert surnamed The Little, was then king of that nation, and a friend to King Oswy, who, when he often came to him into the province of the Northumbrians, used to endeavor to persuade him that those could not be gods that had been made by the hands of men; that a stock or a stone could not be proper matter to form a god, the remains whereof were either burned in the fire, or framed into any vessels for the use of men, or else were cast out as refuse, trampled on and bruised to dust.

That God is rather to be understood as of incomprehensible majesty and invisible to human eyes, almighty, eternal, the Creator of heaven and earth, and of mankind; who governs and will judge the world in righteousness; whose everlasting seat is in heaven, and not in vile and fading matter; and that it ought in reason to be concluded, that all those who have learned and obeyed the will of Him by whom they were created, will receive from Him eternal rewards. King Oswy having often, in a friendly and brotherly manner, said this and much more to the like effect, at length, with the consent of his friends, he believed, and after consulting with those about him, and exhorting them, they all agreed and gave their approbation, and were baptized with him by Bishop Finan; in the king's village above spoken of, which is called At the Wall, because it is close by the wall with which the Romans formerly divided the island of Britain, at the distance of twelve miles from the eastern sea.

King Sigebert, being now become a citizen of the eternal kingdom, returned to the seat of his temporal kingdom, requesting of Oswy that he would give him some teachers, who might convert his nation to the faith of Christ, and baptize them. Oswy, accordingly, sending into the province of the Midland Angles, invited to him the man of God, Cedd, and, giving him another priest for his companion, sent them to preach to the East Saxons. When these two, traveling to all parts of that country, had gathered a numerous church to our Lord, it happened that Cedd returned home, and came to the church of Lindisfarne to confer with Bishop Finan; who, finding how successful he had been in the work of the Gospel, made him bishop of the church of the East Saxons, calling to him two other bishops to assist at the ordination.

Cedd, having received he episcopal dignity, returned to his province, and pursuing the work he had begun with more ample authority, built churches in several places, ordaining priests and deacons to assist him in the work of faith, and the ministry of baptizing, especially in the city which, in the language of the Saxons, is called Ithancestir, as also in that which is named Tilaburg; the first of which places is on the bank of the Pante, the other on the bank of the Thames, where, gathering a flock of servants of Christ, he taught them to observe the discipline of regular life, as far as those rude people were then capable.

Whilst the doctrine of everlasting life was thus, for a considerable time, making progress, to the joy of the king and of all the people, it happened that the king, at the instigation of the enemy of all good men, was murdered by his own kindred. They were two brothers who did this wicked deed; and being asked what had moved them to it, had nothing else to answer, but that they had been incensed against the king, and hated him, because he was too apt to spare his enemies, and easily to forgive the wrongs they had done him, upon their entreaty. Such was the crime for which the king was killed, because he observed the precepts of the Gospel with a devout heart in which innocent death, however, his real offence was also punished, according to the prediction of the man of God. For one of those earls that murdered him was unlawfully married, which the bishop not being able to prevent or correct, he excommunicated him, and commanded all that would give ear to him not to enter within his house, nor to eat of his meat.

The king made slight of this inhibition, and being invited by the earl, went to an entertainment at his house, and when he was going thence, the bishop met him. The king, beholding him, immediately dismounted from his horse, trembling, and fell down at his feet, begging pardon for his offence; for the bishop, who was likewise on horseback, had also alighted. Being much incensed, he touched the king, lying in that humble posture, with the rod he held in his hand, and using his pontifical authority, spoke thus: "I say to you, forasmuch as you would not refrain from the house of that wicked and condemned person, you shall die in that very house." Yet it is to be believed, that such a death of a religious man not only blotted out his offence, but also added to his merit; because it happened on account of his pious observance of the commands of Christ.

BISHOP CEDD, HAVING A PLACE GIVEN HIM BY KING ETHELWALD, CONSECRATES THE SAME TO OUR LORD WITH PRAYER AND FASTING. OF HIS DEATH. [A.D. 659.]

THE same man of God, whilst he was bishop among the East Saxons, was also wont several times to visit his own country, Northumberland, to make exhortations. Ethelwald, the son of King Oswald, who reigned among the Deiri, finding him a holy, wise, and good man, desired him to accept some land to build a monastery, to which the king himself might frequently resort, to offer his prayers and hear the word, and be buried in it when he died; for he believed that he should receive much benefit by the prayers of those who were to serve God in that place.

The king had before with him a brother of the same bishop, called Celin, a man no less devoted to God, who, being a priest, was wont to administer to him the word and the sacraments of the faith; by whose means he chiefly came to know and love the bishop. That prelate, therefore, complying with the king's desires, chose himself a place to build a monastery among craggy and distant mountains, which looked more like lurking-places for robbers and retreats for wild beasts, than habitations for men; to the end that, according to the prophecy of Isaiah, "In the habitations where before dragons dwelt, might be grass with reeds and rushes; " that is, that the fruits of good work should spring up, where before beasts were wont to dwell, or men to live after the manner of beasts.

The man of God, desiring first to cleanse the place for the monastery from former crimes, by prayer and fasting, that it might become acceptable to our Lord, and so to lay the foundations, requested of the king that he would give him leave to reside there all the approaching time of Lent to pray. All which days, except Sundays, be fasted till the evening, according to custom, and then took no other sustenance than a little bread, one hen's egg, and a little milk mixed with water.

This, he said, was the custom of those of whom he had learned the rule of regular discipline; first, to consecrate to our Lord, by prayer and fasting, the places which they had newly received for building a monastery or a church. When there were ten days of Lent still remaining; there came a messenger to call him to the king; and he, that the religious work might not be intermitted, on account of the king's affairs, entreated his priest Cynebil, who was also his own brother, to complete that which had been so piously begun. Cynebil readily complied, and when the time of fasting and prayer was over, he there built the monastery, which is now called Lestingnu, and established therein the religious customs of Lindisfarne, where they had been educated.

Cedd for many years having charge of the bishopric in the aforesaid province, and of this monastery, over which he had placed superiors, it happened that he came thither at a time when there was a mortality, and fell sick and died. He was first buried in the open air; but in the process of time a church was built of stone in the monastery, in honor of the Mother of God, and his body interred in the same, on the right hand of the altar.