In Zenit (Code: ZE07030827;Date: 2007-03-08), Elizabeth Lev lecturer in Christian art and architecture at Duquesne University's Italian campus. has a very perceptive article on the Chapel of Saint Sylvester in the Quattro Coronati Church in Rome. The Chapel has been recently restored. Pictures are below.

Here is the article:

"The Lenten season brings the great consolation of the station churches and the opportunity to pray and meditate in old and beloved sites. The Church of the Quattro Coronati -- Four Crowned Martyrs -- a few short steps from St. John Lateran, is the station for the Fifth Week of Lent, but I went to visit it this week.

Once a jewel of a church, with inlaid marble floors and elegant architecture, today Quattro Coronati retains little of its former glamour.

One notable exception is the little Chapel of St. Sylvester, consecrated in 1247. The paintings have been beautifully restored, and when one walks into the little room, the images shine out brightly and vividly, recounting concerns that are still alive today regarding the relationship between Church and state.

The chapel was painted by an unknown artist working at the height of the struggles between the Pope and the Holy Roman Emperor. It was built in part by a member of the Segni family which produced two of the most important Popes on the Middle Ages, Innocent III (1198-1216) and his nephew Gregory IX (1227-1241). These two dynamic men struggled valiantly against the Holy Roman Emperor's continual encroachment on Church authority.

The Quattro Coronati Church suffered bitterly during these battles. During the Investiture Controversy in 1075, when the Pope and the emperor disputed the right to nominate bishops, Quattro Coronati had been sacked and destroyed.

Undaunted, the Popes rebuilt it, with even more beautiful decor and the addition of the little St. Sylvester Chapel. The decoration was completed under Pope Innocent IV, who also maintained the same uncompromising policies against the Holy Roman Emperor as his predecessors.

The chapel is dedicated to St. Sylvester, the Pope who, in Church lore, convinced Emperor Constantine to convert. During the Middle Ages, he became an excellent model for the Popes struggling against Emperor Frederick II Hohenstaufen.

The Holy Roman Emperor, since the time of Charlemagne in 800, received his authority to rule from the Pope, and in return protected the Church against the violence of her enemies. Over the centuries, the emperors had begun to usurp the Church's role in ecclesiastical decisions.

In the wake of the reforms of the 10th century, the Popes tried to disentangle the Church from its secular manipulators, but the battle proved long and difficult. The city was sacked, prelates imprisoned and Church property confiscated.

In this Chapel of St. Sylvester, the artist painted with a vigorous freshness that declared from the very walls that the tides had turned. A series of panels right above the head of the visitor tell the story of how St. Sylvester converted Constantine.

The story is taken from the Golden Legend, which in this case is not historically accurate, but more important than historical accuracy the artists makes a contemporary point about the emperor.

According to the legend depicted, Constantine started his tenure as co-emperor as a persecutor of Christians. For his sins, he was struck with leprosy. This illness is dramatically rendered in the fresco. The emperor, replete with crown and jeweled robes, is depicted as covered with red spots while his head droops in shame.

There was only one supposed cure for leprosy in that age, which required that the victim bathe in the warm blood of babies to expunge the disease. An astonishing scene represents the leprous emperor, sitting on his throne and giving the order to have the babies gathered up for slaughter. Mothers and fathers plead, wail and clutch their children to no avail -- the emperor must be cured.

It won't escape many modern viewers how we have come full circle to the same barbarities. In the modern debate over embryonic stem cells, the chief argument used for the destruction of these tiny human lives is their putative power to cure other diseases.

Constantine, however, was troubled by this solution and rejected the cure, speaking some of the most resonant lines of the Golden Legend: "The honor of the Roman people is born of the font of piety, which gave us the law that anyone who kills a child in war shall incur the sentence of death.

"What cruelty would it be then if we did to our own children what we are forbidden to do to aliens! What do we gain in conquering barbarians if we allow cruelty to conquer us!"

Constantine was rewarded with a dream of St. Peter and St. Paul telling him to seek out Pope Sylvester in Rome. Upon finding the Pope, Constantine had himself baptized, and, in cleansing his soul, his body was healed.

Constantine's gratitude to the Pope was boundless. Kneeling before the Pope, he recognized the importance of the spiritual power of the Pope.

Constantine paid honors to St. Sylvester and even led the Pope's horse on foot, something Frederick II was unlikely to be repeating.

This story, which tries to define the realms of the temporal and spiritual, how the overlap and interact, shows the sophisticated medieval understanding that Church and state are not so easily divided. Separated from any moral authority, the state weakens and loses sight of what is best for its citizens.

Ironically, we use the term "medieval" to refer to what we perceive as an ignorant and violent age. I can't help but wonder what the Middle Ages would make of us today. " 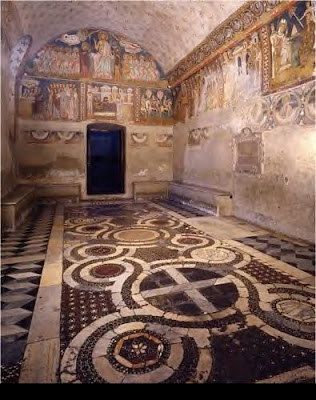 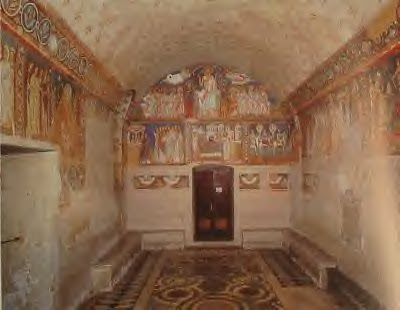 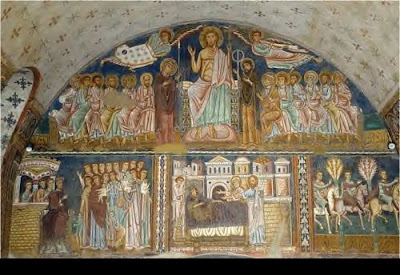 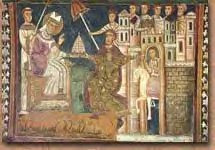