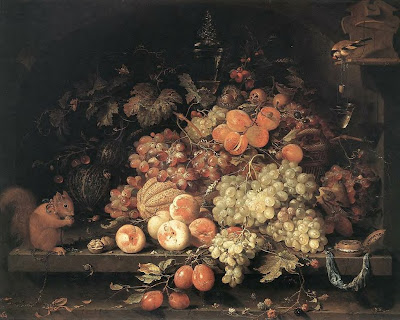 MIGNON, Abraham (b. 1640, Frankfurt, d. 1679, Wetzlar)
Fruit Still-Life with Squirrel and Goldfinch
Oil on canvas, 80,5 x 99,5 cm
Staatliche Museen, Kassel
The Web Gallery of Art has the following comment regarding the symbolism in the painting:

"The painting contains both Eucharistic symbols and an element of transience, indicated by the small number of rotten spots of the fruit, as well as the presence of a clock, and the dualism of good and evil.

The two rather cute little animals, a squirrel and a goldfinch, are also in opposition to each other. The squirrel seems to be chained up, but on closer inspection we notice that it has managed to free itself. It has cracked open a walnut and is now eating its kernel.

The squirrel had been regarded as a symbol of the evil since the Middle Ages. In this painting it embodies the unleashing of evil in the form of harmlessness. The bell collar around its neck also identifies it as a 'fool' and thus a sinner. The meaning of a squirrel eating walnut becomes obvious when we consider that St Augustine saw the walnut as a symbol of Christ, with the shell as the wood of the cross and the kernel as the life-giving nature of Christ.

Unlike the squirrel, the goldfinch is a christological symbol, particularly with reference to the Passion. Its positive meaning can be gathered from its position in the upper portion of the painting (top=sphere of salvation).

The actions of the bird are worth nothing. Chained to an arched semicircle, from which it can peck food out of a small container, it is pulling up a thimble-sized receptacle from the left-hand edge of the shelf. It is filled with water or - more likely - wine (as a Eucharistic symbol of the blood of Christ), which has been scooped out of a conical glass without stem or base."
Posted by Unknown at 8:17 pm