Some Thoughts on China 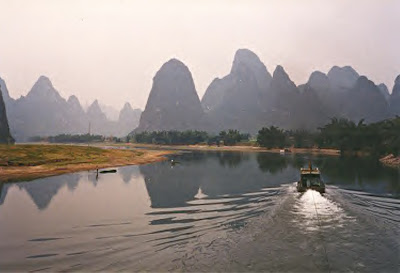 In A Chinese Scholar Reckons With His Past, Jingbei Hu describes his youth during the Cultural Revolution through extracts of his diary written at the time.

In his diary, he praised the "Socialist Revolution" but now recognises that "socialist revolution" led to the murder of countless scholars and the shuttering of many schools. Still, he is determined to share the words he wrote in his diary with anyone willing to read them. Now an economics professor at Tongji University here, his goal is to show how the Communist government bent his will during the Cultural Revolution, more than 35 years ago.

"If we don't work on this problem, on understanding how this brainwashing occurred, we will have another Cultural Revolution," Mr. Hu says while eating dinner in a student restaurant at Tongji. He is a wiry man who finishes every scrap of the oversized portions then eats the leftover pizza on others' plates.

Through a fellowship, Mr. Hu spent January and February at Stanford University's Hoover Institution doing research for a Chinese-language book that will examine the impact of Communist ideology on Chinese children. In the long term, he hopes, his research will help pave the way for greater tolerance and freedom in China.

But in the meantime, Mr. Hu has put online the diaries he kept as a teenager during the Cultural Revolution — diaries that he now compares to those kept by Hitler Youth members in Nazi Germany. And he is on a personal mission to understand how, as a young man of 18, he was so absolutely convinced that Mao Zedong was a hero worth putting all his faith into.