Andreu Sala (Cardona, 1627 - Barcelona [?], c. 1700)
St Cajetan
Convent of the Theatines in Barcelona
St Cajetan of Thiene, founder of the Theatine Order, stands erect dressed in the habit of the congregation of regular clerics (a black cassock and white smock), while in his hands he holds a lily and an open book, the rule that Pope Clement VII approved in 1521. The saint crushes a malign character, an old bearded man with his head resting on an open book, who represents heresy. 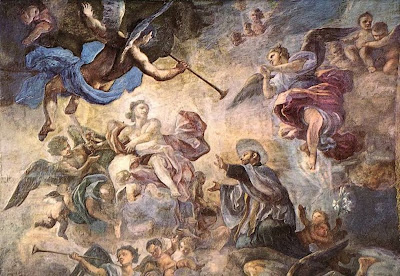 The lily which the painters and sculptors of the Baroque loved in depicting saints is today unfortunate. There was nothing lily-livered about this saint.

Canonised on the same date as St Rose of Lima, Saint Cajetan, born Gaetano dei Conti di Tiene, also Thiene (October 1480 - August 7, 1547) was the founder of the order of the Clerics Regular, better known as the Theatines. He is not to be confused with his contemporary, Thomas Cardinal Cajetan.

The death of Pope Julius in 1523 led him to withdraw from the court, founding an order based on these ideals, the Oratory of Divine Love.

This new congregation was canonically erected by Clement VII in 1524. One of his four companions was Giovanni Pietro Carafa, Bishop of Chieti (in Latin, Theate), afterwards Paul IV, who was elected first superior, and from whose title arose the name Theatines.

In 1533, the Theatines founded a house in Naples with Cajetan as its superior. Thereafter, the order rapidly spread throughout Italy, then Europe.

In Naples, Cajetan fought widespread opposition to the reforms of the bishops and the prevalent heresies. Later, with Blessed John Marinoni, he founded the montes pietatis to help extend loans to the poor and combat usury.

Cajetan, one of the great Catholic reformers, died in Naples, on a bed of ashes. At his request, he was buried in a common grave in the church of Saint Paul. Many of the reforms of the Council of Trent were anticipated and implemented by Cajetan long before that council convened.