Sacred Images and the Council of Trent 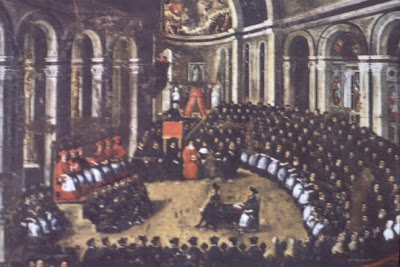 Depiction of the Opening of the Council of Trent (1548) 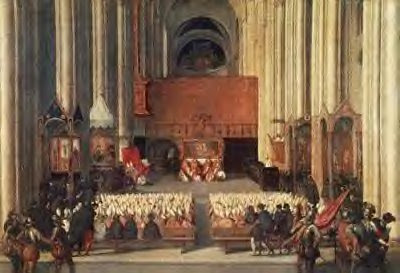 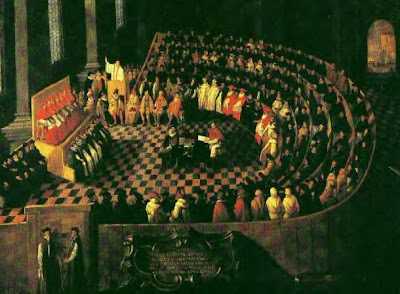 Official Portrait of the Council of Trent

On the 4th December 1563, at its Twenty fifth Session, the Council of Trent passed a number of Decrees which, amongst other things dealt with Sacred Images. (Note 1)

The Council dealt with two issues:

1. It confirmed that despite the extensive iconoclasm in the fifteenth century by followers of Calvin, Zwingli and the Puritans in Great Britain, the use of sacred imagery was permitted and was not prohibited by the Second Commandment`s prohibition against idolatry. It reconfirmed the decision of the Second Council of Nicaea in AD 787.

2. It decided to impose restrictions on what could be depicted: it tried to set general standards as to what could not be depicted in sacred images; and it set up a procedure for the approval or disapproval of such sacred imagery by strengthening the powers of the Bishop and the Pope.

As regards the second issue, the Council was attempting to solve a controversy that had been raging for a number of years: what was suitable, appropriate or decorous in religious art. The debate had been in particular raging since the 1540s when Michelangelo had completed the Last Judgement in the Sistine Chapel. The nudity of the figures had been severely criticised.

In the 1540s, Mannerism was still the dominant school. However, Mannerism was "running out of steam": many Mannerist compositions had become competitions as to who could produce the most imaginative or striking or brilliant image. Clarity and directness were lacking.

The issue was important to artists. Apart from the rich and the authorities of the secular state, the Church was the main patron for their paintings.

At Trent, there were two Cardinals who took part in the proceedings and had a special interest in Art and the use of Sacred Images and who were subsequently to take a major part in the reform of Catholic Art : Saint Cardinal Charles Borromeo (October 2, 1538 – November 4, 1584) and Cardinal Gabriele Paleotti, Cardinal and Archbishop of Bologna. (4 October, 1522; died at Rome, 22 July, 1597)

The Council of Trent: The Twenty-Fifth Session
The canons and decrees of the sacred and oecumenical Council of Trent,
Ed. and trans. J. Waterworth (London: Dolman, 1848), 232-89.
provided that in relation to Sacred Images:

"The holy Synod enjoins on all bishops, and others who sustain the office and charge of teaching, that, agreeably to the usage of the Catholic and Apostolic Church, received from the primitive times of the Christian religion, and agreeably to the consent of the holy Fathers, and to the decrees of sacred Councils, they especially instruct the faithful diligently concerning ... the legitimate use of images: teaching them, ... that the images of Christ, of the Virgin Mother of God, and of the other saints, are to be had and retained particularly in temples, and that due honour and veneration are to be given them; not that any divinity, or virtue, is believed to be in them, on account of which they are to be worshipped; or that anything is to be asked of them; or, that trust is to be reposed in images, as was of old done by the Gentiles who placed their hope in idols; but because the honour which is shown them is referred to the prototypes which those images represent; in such wise that by the images which we kiss, and before which we uncover the head, and prostrate ourselves, we adore Christ; and we venerate the saints, whose similitude they bear: as, by the decrees of Councils, and especially of the second Synod of Nicaea, has been defined against the opponents of images.

And the bishops shall carefully teach this,-that, by means of the histories of the mysteries of our Redemption, portrayed by paintings or other representations, the people is instructed, and confirmed in (the habit of) remembering, and continually revolving in mind the articles of faith; as also that great profit is derived from all sacred images, not only because the people are thereby admonished of the benefits and gifts bestowed upon them by Christ, but also because the miracles which God has performed by means of the saints, and their salutary examples, are set before the eyes of the faithful; that so they may give God thanks for those things; may order their own lives and manners in imitation of the saints; and may be excited to adore and love God, and to cultivate piety. But if any one shall teach, or entertain sentiments, contrary to these decrees; let him be anathema.

And if any abuses have crept in amongst these holy and salutary observances, the holy Synod ardently desires that they be utterly abolished; in such wise that no images, (suggestive) of false doctrine, and furnishing occasion of dangerous error to the uneducated, be set up.

And if at times, when expedient for the unlettered people; it happen that the facts and narratives of sacred Scripture are portrayed and represented; the people shall be taught, that not thereby is the Divinity represented, as though it could be seen by the eyes of the body, or be portrayed by colours or figures.

Moreover, in ... the sacred use of images, every superstition shall be removed, all filthy lucre be abolished; finally, all lasciviousness be avoided; in such wise that figures shall not be painted or adorned with a beauty exciting to lust; nor the celebration of the saints, and the visitation of relics be by any perverted into revellings and drunkenness; as if festivals are celebrated to the honour of the saints by luxury and wantonness.

In fine, let so great care and diligence be used herein by bishops, as that there be nothing seen that is disorderly, or that is unbecomingly or confusedly arranged, nothing that is profane, nothing indecorous, seeing that holiness becometh the house of God.

And that these things may be the more faithfully observed, the holy Synod ordains, that no one be allowed to place, or cause to be placed, any unusual image, in any place, or church, howsoever exempted, except that image have been approved of by the bishop: .... But if any doubtful, or difficult abuse has to be extirpated; or, in fine, if any more grave question shall arise touching these matters, the bishop, before deciding the controversy, shall await the sentence of the metropolitan and of the bishops of the province, in a provincial Council; yet so, that nothing new, or that previously has not been usual in the Church, shall be resolved on, without having first consulted the most holy Roman Pontiff. "