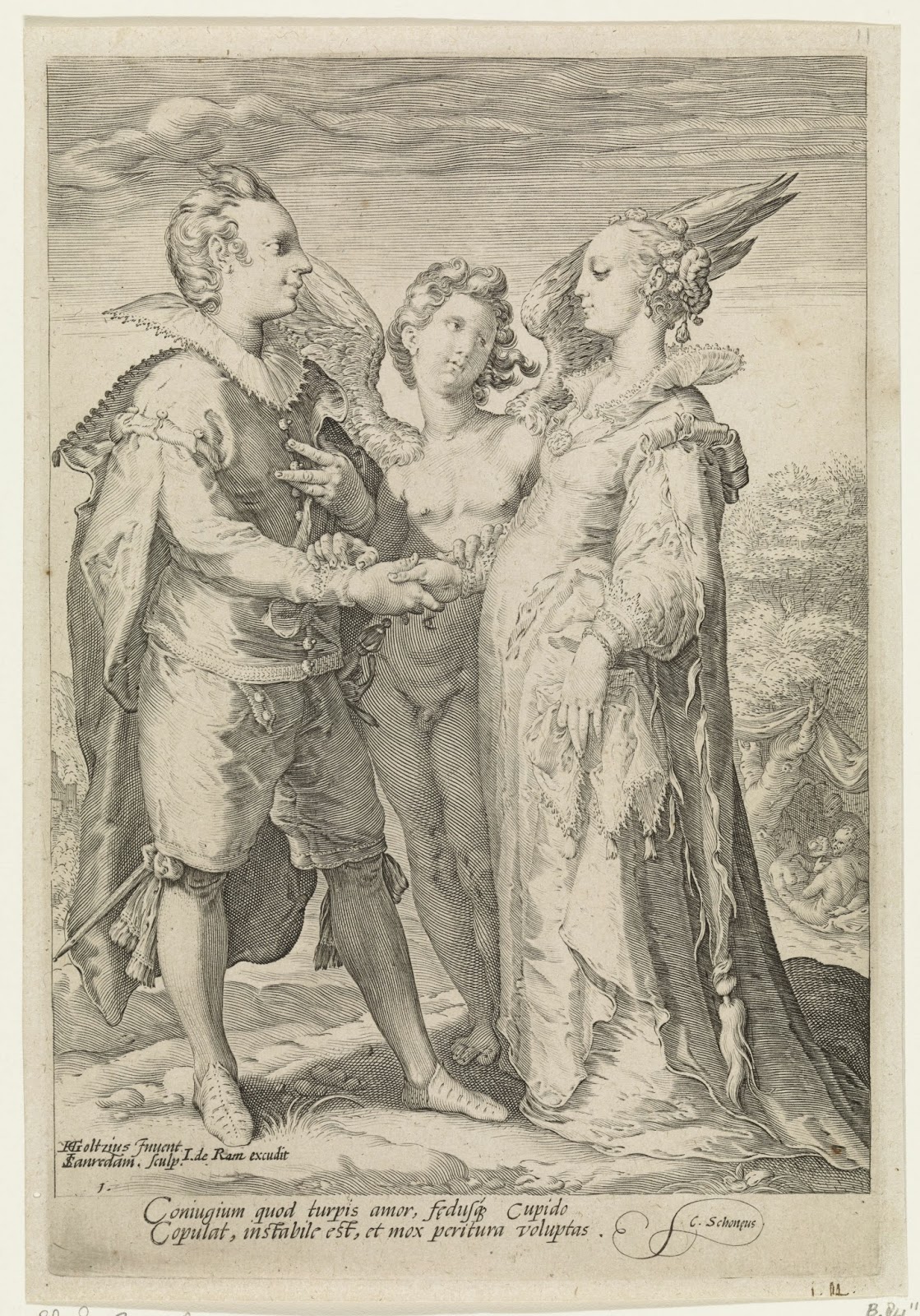 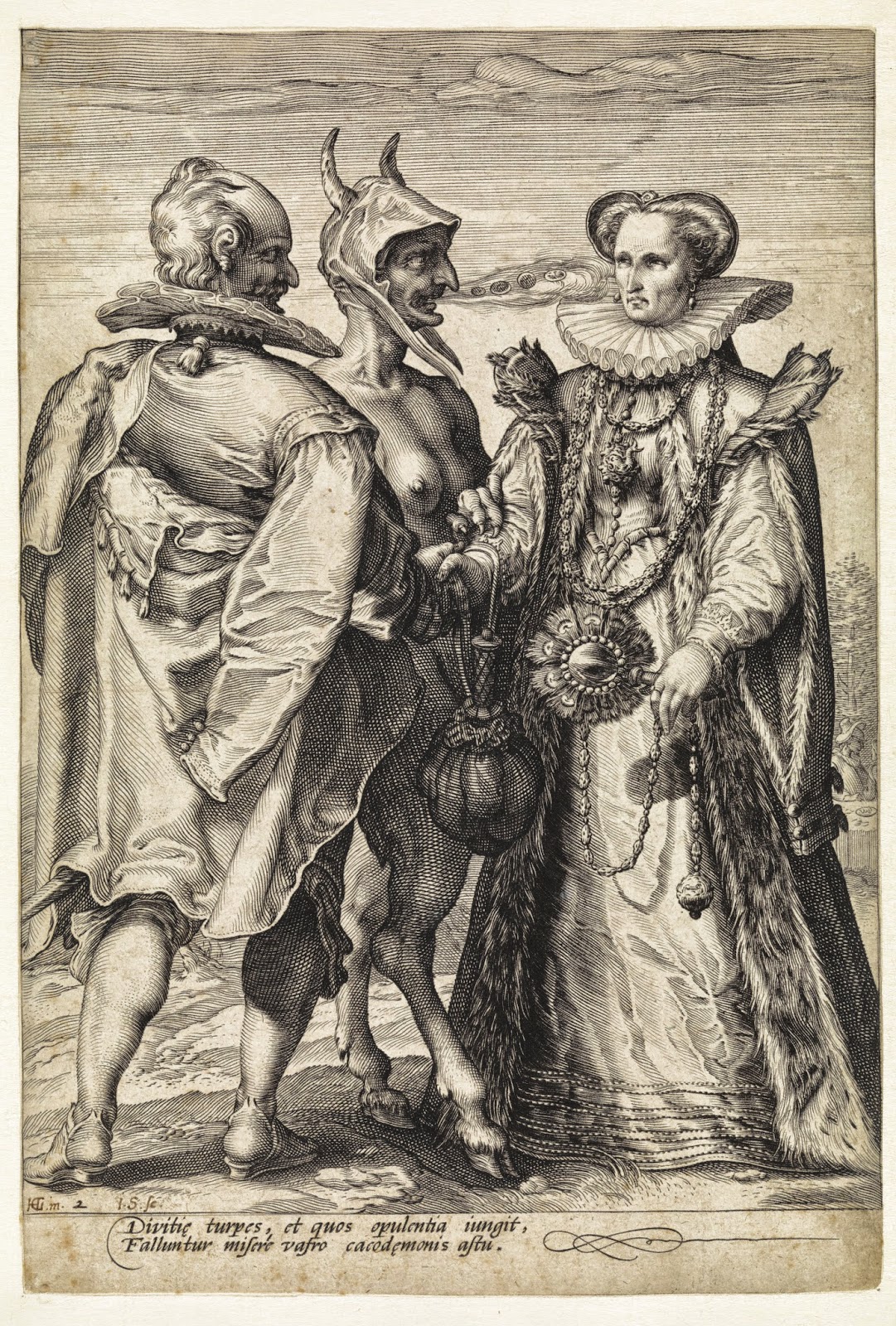 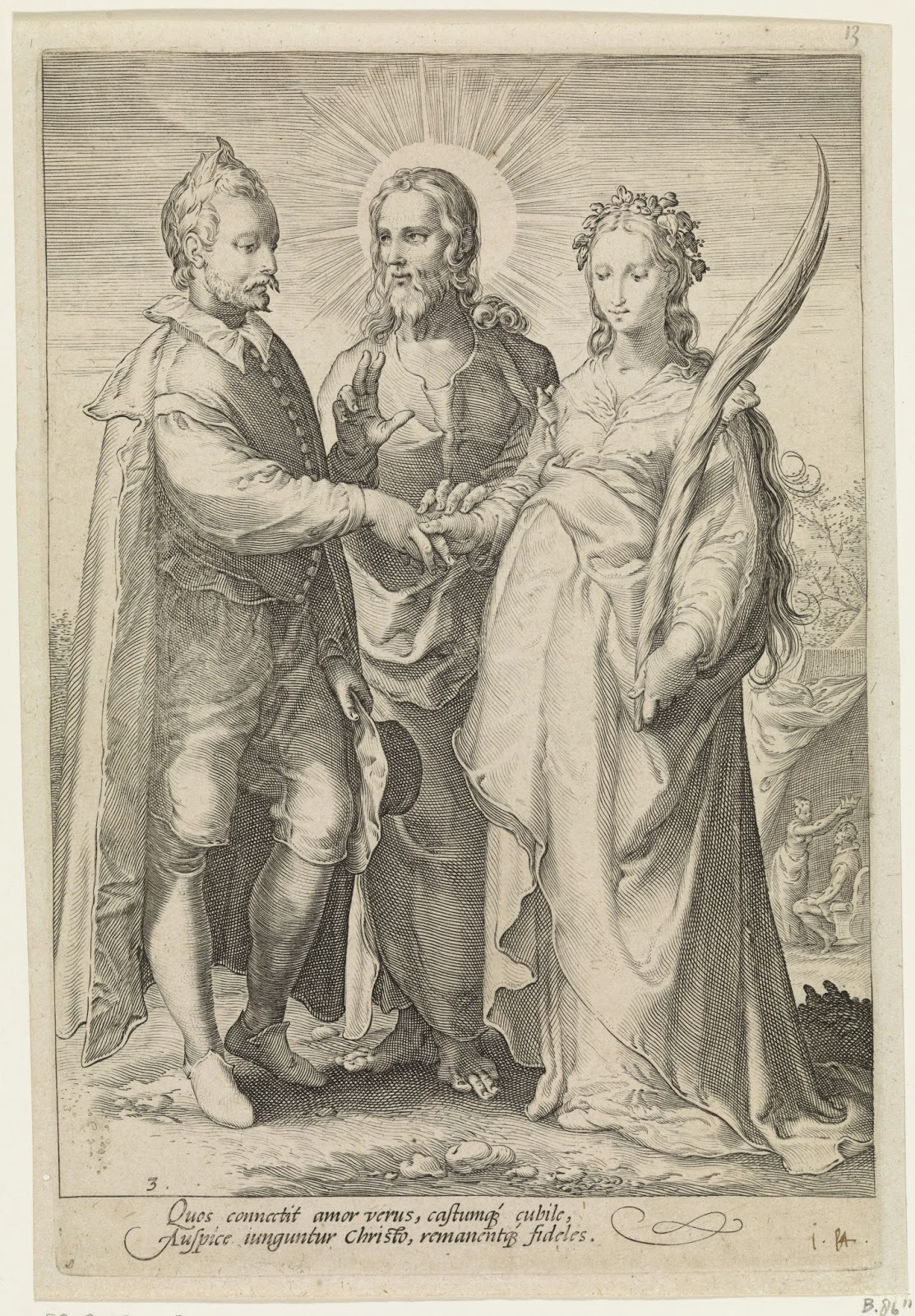 The three prints are from a series of three plates showing three different kinds of marriage, engraved by Saenredam after designs by Hendrick Goltzius

The set was first published in Haarlem by Goltzius around 1595

Goltzius was an internationally acclaimed engraver, print publisher, draftsman, and painter,and was one of the outstanding figures in Dutch art during the late sixteenth and early seventeenth centuries

In the late 1580s, he was at the height of his success and created some of the most spectacular pieces in the history of prints

When Goltzius was only a year old, he fell headfirst into the fireplace and burned both his hands on the red-hot coals. His right hand was permanently deformed. Despite this he was capable of exceptional virtuosity, and one of the greatest draftsmen of his time.

At the age of 21 Goltzius married a rich widow Margaretha Jansdr in 1579. It was she who  helped him set up a workshop

Physical attraction was only one of the factors to be taken into account. Spiritual and mental connection between spouses also had to exist as the basis for life long companionship

In a strongly Protestant Holland ruled by Catholic Spain, prints on the ideal Christian marriage were popular

In the third print which obviously contrasts with the two others, we see Christ himself officiating at the Sacrament of marriage.

The man is more mature. The woman holds a palm the symbol of purity

The inscription reads: "Quos connectit amor verus, castumque cubile / Auspice iunguntur Christo, remanentque fideles." - Those who are joined by true love and a chaste marriage bed will be faithful to each other

In the background of the image the husband receives a  crown from his wife. The other images have other background images which show that the other relationships are destined to lead to unhappiness, loneliness and vice

But more than that, mutual affection and love  which are absent from the other two images 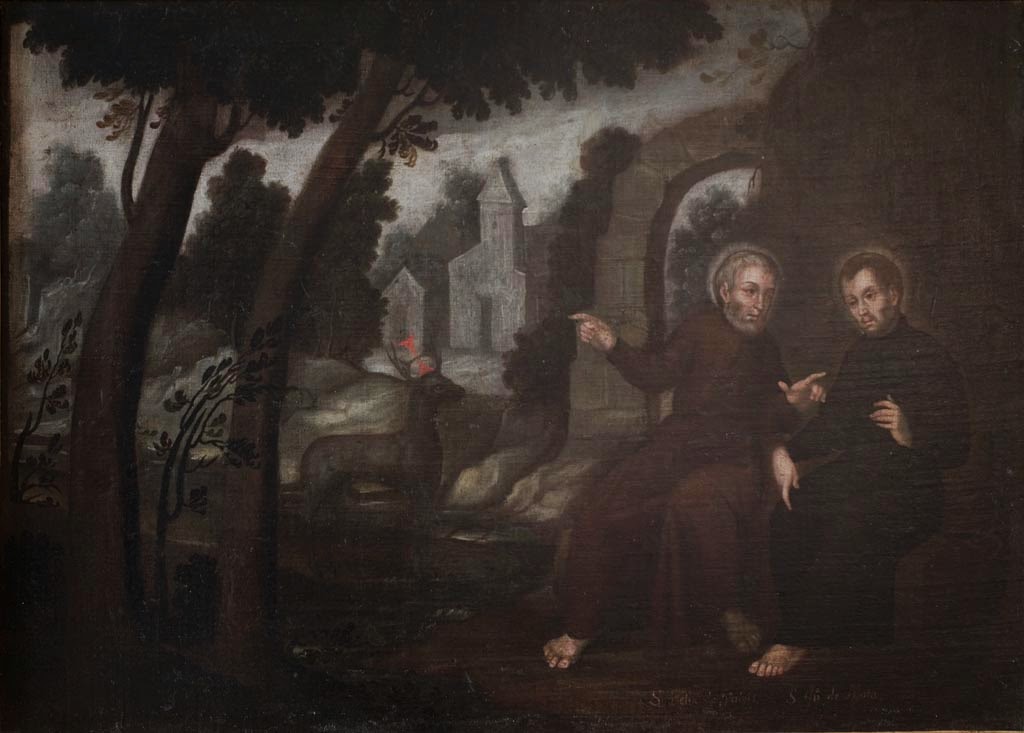 The painting is by an unknown Peruvian artist in the 18th century, a mixture of European Baroque and indigenous influences, perhaps part of the Cuzco school (Escuela Cuzqueña),  the Roman Catholic artistic tradition based in Cuzco, Peru (the former capital of the Inca Empire)

Its influence extended through Peru, Chile, and northern Argentina and beyond

The Rule of the Order was approved by Innocent III on December 17, 1198 with the bull Operante Divine Dispositionis.

It is the first official institution in the Church dedicated to the service of redemption and unarmed, with no other weapon beside Divine Mercy, and with the only purpose of returning hope to the brothers in the faith who suffer under the burden of captivity.

Here we see the two saints in  the forest or desert of Cerfroid, near Paris where the mother house of the whole order presently is

Margaret of Blois granted the order twenty acres of the wood where Felix had built his first hermitage, and on almost the same spot he erected the famous monastery of Cerfroi, the mother-house of the institute.

Within forty years the order possessed six hundred monasteries in almost every part of the world.

The stag is a symbol for Christ, who tramples and destroys the Devil. The stag is the enemy of the Snake, the symbol of the Evil One. Both are visible in the painting

In the 7th century, St Isidore of Seville wrote in his  Etymologiae about the stag:

[They] are foes of snakes, and when they feel that they are weighed down with  weakness they draw snakes out from their holes by the breath of their nostrils and  overcoming the deadly poison they  refresh themselves by eating them. They made known the plant dittany. For they eat it, and shake out the arrows that have stuck in them.

They give a wondering attention to the whistling sound of the Pan’s pipes. They  listen sharply with up-pricked ears, not with hanging ears. If ever they swim across great rivers or seas, they lay the head on the haunch of the one in front, and following one another in turn they feel no weariness from the weight

The name of the hermitage "Cerfroid" has significance. The French for stag is "Cerf". The place is therefore the place of the Cold Stag, or Winter Stag

The arch also has significance in the founding of the Order.

The church of San Tommaso in Formis in Rome is the church which Pope Innocent III gave to the Trinitarian Order. Saint John of Matha, lived there and made it the Order's headquarters

St John of Matha died there on 2 December 1213. His cell can still be seen

From the very beginning of the Order, a life of special dedication to the Most Holy Trinity has been an essential and characteristic element of the Order’s patrimony

Members of the Order consecrate themselves to the Trinity in a further and special way “since God willed that we, among all other religious, be the chosen vessels to bear the wonderful title of the Most Holy Trinity throughout the world"

Last year on the 800th anniversary of the death of St John of Matha, Pope Francis said;

"Work, effort and freely given love are all summed up in the Rule of St John of Matha, in the words Ministro e sine proprio (Trinitarian Rule, n. 1). Indeed, the Trinitarians know, and we should all learn from them, that every responsibility or authority in the Church should be lived out as a service.

Therefore, our action must be divested of any desire for profit or personal promotion and must always aim at sharing any talents we have received from God, in order to direct them, as good stewards, towards the end for which they have been granted to us, so as to give relief to the less fortunate.

This is what interests Christ and that is why the homes of your Family are homes whose “doors are always open” in fraternal welcome (Direttorio primitivo delle Suore Trinitarie, n. 2, cf. Evangelii Gaudium, n. 46)."

Posted by Unknown at 1:09 pm No comments: