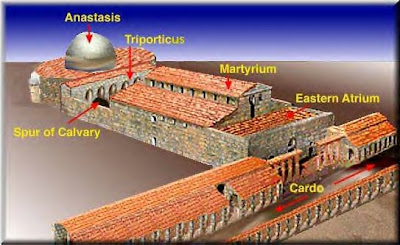 Artist`s impression of the Constantine basilica complex in Jerusalem

Egeria (also known as Aetheria) was a western European pilgrim, probably a nun from what is now Spain, who wrote of her pilgrimage to the Holy Land during the late fourth century. She recorded her experiences in a long letter to the nuns of her community.

Her experiences were recorded in a book called Itinerarium Egeriae. The two surviving parts of her book begin, in the first part, as she approached Mount Sinai and end in Constantinople and in the second part with descriptions of the services in Jerusalem.

Egeria's Description of the Liturgical Year in Jerusalem: Translation
Based on the translation reproduced in Louis Duchesme's Christian Worship (London, 1923)

"And when the Paschal days come they are observed thus : Just as with us forty days are kept before Easter, so here eight weeks are kept before Easter. And eight weeks are kept because there is no fasting on the Lord's Days, nor on the Sabbaths, except on the one Sabbath on which the Vigil of Easter falls, in which case the fast is obligatory. With the exception then of that one day, there is never fasting on any Sabbath here throughout the year. Thus, deducting the eight Lord's Days and the seven Sabbaths (for on the one Sabbath, as I said above, the fast is obligatory) from the eight weeks, there remain forty-one fast days, which they call here Eortae, that is Quadragesimae.

3. Afterwards, in the morning, they proceed to the greater church, called the martyrium, which is in Golgotha behind the Cross, and all things that are customary on the Lord's Days are done there. In like manner also when the dismissal from the church has been made, they go with hymns to the Anastasis, as they always do on the Lord's Days, and while these things are being done the fifth hour is reached. Lucernare, however, takes place at its own hour, as usual, at the Anastasis and at the Cross, and in the various holy places; on the Lord's Day the ninth hour is kept.

Weekday Services.
4. On the second weekday they go at the first cockcrow to the Anastasis, as they do throughout the year, and everything that is usual is done until morning. Then at the third hour they go to the Anastasis, and the things are done that are customary throughout the year at the sixth hour, for this going at the third hour in Quadragesima is additional. At the sixth and ninth hours also, and at lucernare, everything is done that is customary throughout the whole year at the holy places.

5. And on the third weekday all things are done as on the second weekday.

6. But on the days of Quadragesima, as I said above, they proceed to Sion on the fourth weekday at the ninth hour, according to the custom of the whole year, and all things that are customary at the ninth hour are done, except the oblation, for, in order that the people may always be instructed in the law, both the bishop and the priest preach diligently. But when the dismissal has been made, the people escort the bishop with hymns thence to the Anastasis, so that it is already the hour of lucernare when he enters the Anastasis; then hymns and antiphons are said, prayers are made, and the service (missa) of lucernare takes place in the Anastasis and at the Cross.

8. Throughout the whole night psalms are said responsively in turn with antiphons and with various lections, the whole lasting until morning, and the dismissal, which takes place on the Sabbath at the Anastasis, is before sunrise, that is, the oblation, so that the dismissal may take place in the Anastasis at the hour when the sun begins to rise. Thus, then, is each week of Quadragesima kept.

9. The dismissal taking place earlier on the Sabbath, i.e. before sunrise, as I said, in order that the hebdomadarii, as they are called here, may finish their fast earlier. For the custom of the fast in Quadragesima is that the dismissal on the Lord's Day is at the fifth hour in order that they whom they call hebdomadarii; that is, they who keep the weeks' fast, may take food. And when these have taken breakfast on the Lord's Day, they do not eat until the Sabbath morning after they have communicated in the Anastasis. It is for their sake, then, that they may finish their fast the sooner, that the dismissal on the Sabbath at the Anastasis is before sunrise. For their sake the dismissal is in the morning, as I said; not that they alone communicate, but all who are so minded communicate on that day in the Anastasis.

XXVIII. This is the custom of the fast in Quadragesima: some, when they have eaten after the dismissal on the Lord's Day, that is, about the fifth or sixth hour, do not eat throughout the whole week until after the dismissal at the Anastasis on the Sabbath; these are they who keep the weeks' fast.

2. Nor, after having eaten in the morning, do they eat in the evening of the Sabbath, but they take a meal on the next day, that is, on the Lord's Day, after the dismissal from the church at the fifth hour or later, and then they do not breakfast until the Sabbath comes round, as I have said above.

3. For the custom here is that all who are apotactitae, as they call them here, whether men or women, eat only once a day on the day when they do eat, not only in Quadragesima, but throughout the whole year. But if any of the apotactitae cannot keep the entire week of fasting as described above, they take supper in the middle (of the week), on the fifth day, all through Quadragesima. And if any one cannot do even this, he keeps two days' fast (in the week) all through Quadragesima, and they who cannot do even this, take a meal every evening.

4. For no one exacts from any how much he should do, but each does what he can, nor is he praised who has done much, nor is he blamed who has done less; that is the custom here. For their food during the days of Quadragesima is as follows:--they taste neither bread which cannot be weighed, nor oil, nor anything that grows on trees, but only water and a little gruel made of flour. Quadragesima is kept thus, as we have said.

XXIX. And at the end of the weeks' fast the vigil is kept in the Anastasis from the hour of lucernare on the sixth weekday, when the people come with psalms from Sion, to the morning of the Sabbath, when the oblation is made in the Anastasis. And the second, third, fourth, fifth and sixth weeks in Quadragesima are kept as the first. "

Section on the Basilica of the Anastasis/Resurrection on the Franciscan-Christus Rex Website:
The Liturgy of Jerusalem according to Egeria (IV cent.)
(especially during Holy Week)
http://www.christusrex.org/www1/jhs/TSspeger.html

The Byzantine monument at the Garden of Golgotha (335 AD)
http://www.christusrex.org/www1/jhs/TSspbyza.html

The Pilgrimage of Etheria
Translated and edited by M.L. McClure and C. L. Feltoe, ed. and trans.
London: Society for Promoting Christian Knowledge, 1919.
http://www.ccel.org/m/mcclure/etheria/etheria.htm
Posted by Unknown at 6:38 pm