The Denial of Saint Peter 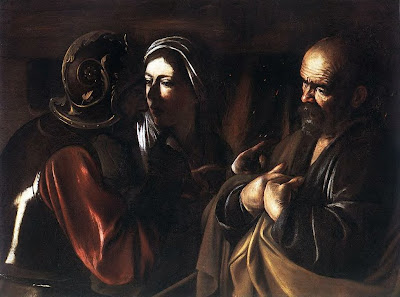 69Now Peter was sitting out in the courtyard, and a servant girl came to him. "You also were with Jesus of Galilee," she said.

70But he denied it before them all. "I don't know what you're talking about," he said.

71Then he went out to the gateway, where another girl saw him and said to the people there, "This fellow was with Jesus of Nazareth."

73After a little while, those standing there went up to Peter and said, "Surely you are one of them, for your accent gives you away."

74Then he began to call down curses on himself and he swore to them, "I don't know the man!"
Immediately a rooster crowed.

75Then Peter remembered the word Jesus had spoken: "Before the rooster crows, you will disown me three times." And he went outside and wept bitterly.
Posted by Unknown at 8:16 pm