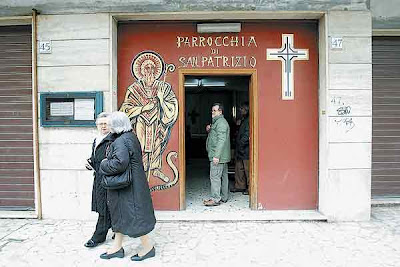 North County Times reports (based on an AP report) on the problems faced by the Diocese of Rome in trying to serve all the parishioners in the Diocese and at the same time as trying to look after all the ancient and historic churches in the City Centre:

"The faithful lowered their heads in prayer as the priest celebrated Mass. The only peculiarity about the act of worship was its setting: a garagelike space inside an apartment building, with an altar made of bamboo.

It was supposed to be temporary, but the Rev. Arnaldo D'Innocenzo's makeshift church in this desolate, working-class community on Rome's western outskirts has been serving local parishioners for more than 30 years.

About 12 miles east, in the historic center of Rome, tourists mill about the 400-year-old Baroque Church of St. Ignatius Loyola, admiring the trompe l'oeil frescoes on the ceiling and the relics of saints.


But regular worshippers there are few and far between.

It's a situation that has been confounding the Diocese of Rome, the very heart of the Roman Catholic world: The magnificent churches of the city center serve more as museums than houses of prayer, while many among the burgeoning throngs of the faithful in the scrappy outskirts of town are forced to worship in garages, former grocery stores, or prefab buildings.

One reason is that there is a higher concentration of regular churchgoers among the poor Italians and eastern European immigrants living in the suburbs than among the more affluent Romans in the heart of the city. Much of the center also has been taken over by commercial spaces and government buildings -- resulting in lower population density.

For the Rev. Ferruccio Romanin, rector of St. Ignatius Loyola, the problems are compounded by intense competition for worshippers: There are at least 10 other churches within a short walk from where he preaches. And in Rome's center, there are more than 200 churches that are an important part of the country's artistic heritage.

"The problem in Rome is the high concentration of churches. But you can't ship them out, they're historical," Romanin said. "There's no solid group (of worshippers) here. They change. They'll come and say, ‘Oh, what a nice sermon,' and then they leave and I never see them again."

Meanwhile, the Diocese of Rome is struggling to provide for the spiritual needs of the rapidly growing neighborhoods on the outskirts of Rome.

Bishop Ernesto Mandara, who is in charge of building new churches within the diocese, says huge amounts of church funds go into the upkeep of the glorious churches of the city center at the expense of the suburban parishes. He said priests who have been waiting for a church for years often lobby him for a new building.

"Sometimes I live as if I were surrounded by creditors -- I have to hide from parish priests, some of whom live in dire situations," Mandara said.

At his parish of San Patrizio a Colle della Mentuccia, D'Innocenzo described the frustration he has lived through waiting for a church.

He said generations of children have been baptized and received their first Communion in his ramshackle church, but nobody wants to get married there. "They all looked for a more beautiful church," he said."