The Descent into Hell 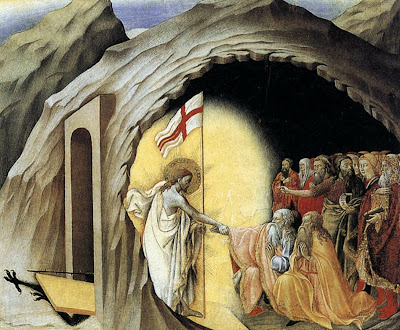 The episode of the Descent into Hell is not mentioned in the canonical gospels, but recounted in the apocryphal gospel of Nicodemus. The imagery of Christ breaking down hell's door and trapping a hairy and hideous Satan who lies vanquished is traditional. Likewise, Christ holding out to help Adam out of Hell.

Catechism of the Catholic Church
Part One, Section Two, Article 5:
"HE DESCENDED INTO HELL. ON THE THIRD DAY HE ROSE AGAIN"

631 Jesus "descended into the lower parts of the earth. He who descended is he who also ascended far above all the heavens."475 The Apostles' Creed confesses in the same article Christ's descent into hell and his Resurrection from the dead on the third day, because in his Passover it was precisely out of the depths of death that he made life spring forth:


Christ, that Morning Star, who came back from the dead, and shed his peaceful light on all mankind, your Son who lives and reigns for ever and ever. Amen.476

632 The frequent New Testament affirmations that Jesus was "raised from the dead" presuppose that the crucified one sojourned in the realm of the dead prior to his resurrection.477 This was the first meaning given in the apostolic preaching to Christ's descent into hell: that Jesus, like all men, experienced death and in his soul joined the others in the realm of the dead. But he descended there as Savior, proclaiming the Good News to the spirits imprisoned there.478

633 Scripture calls the abode of the dead, to which the dead Christ went down, "hell" - Sheol in Hebrew or Hades in Greek - because those who are there are deprived of the vision of God.479 Such is the case for all the dead, whether evil or righteous, while they await the Redeemer: which does not mean that their lot is identical, as Jesus shows through the parable of the poor man Lazarus who was received into "Abraham's bosom":480 "It is precisely these holy souls, who awaited their Savior in Abraham's bosom, whom Christ the Lord delivered when he descended into hell."481 Jesus did not descend into hell to deliver the damned, nor to destroy the hell of damnation, but to free the just who had gone before him.482

634 "The gospel was preached even to the dead."483 The descent into hell brings the Gospel message of salvation to complete fulfilment. This is the last phase of Jesus' messianic mission, a phase which is condensed in time but vast in its real significance: the spread of Christ's redemptive work to all men of all times and all places, for all who are saved have been made sharers in the redemption.

635 Christ went down into the depths of death so that "the dead will hear the voice of the Son of God, and those who hear will live."484 Jesus, "the Author of life", by dying destroyed "him who has the power of death, that is, the devil, and [delivered] all those who through fear of death were subject to lifelong bondage."485 Henceforth the risen Christ holds "the keys of Death and Hades", so that "at the name of Jesus every knee should bow, in heaven and on earth and under the earth."486


Today a great silence reigns on earth, a great silence and a great stillness. A great silence because the King is asleep. The earth trembled and is still because God has fallen asleep in the flesh and he has raised up all who have slept ever since the world began. . . He has gone to search for Adam, our first father, as for a lost sheep. Greatly desiring to visit those who live in darkness and in the shadow of death, he has gone to free from sorrow Adam in his bonds and Eve, captive with him - He who is both their God and the son of Eve. . . "I am your God, who for your sake have become your son. . . I order you, O sleeper, to awake. I did not create you to be a prisoner in hell. Rise from the dead, for I am the life of the dead."487

Email ThisBlogThis!Share to TwitterShare to FacebookShare to Pinterest
Labels: The Descent into Hell; Siennese; Master of the Osservanza; Cathechism