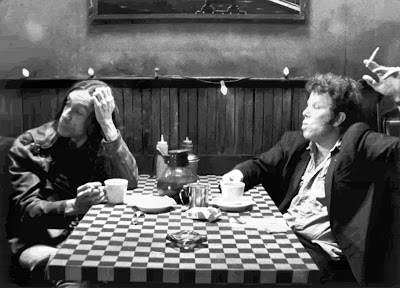 Under the arresting banner, Drugs, alcohol and sex: why the Jesuits like Tom Waits The Times reports on an article in the Jesuit magazine Civilta Cattolica.

"At last the Vatican has found a rock oddball who embodies the softer side of Christianity.

Even if Tom Waits’s songs, which include Dragging a Dead Priest, are sung in a rasping voice that seems to have been soaked in a whisky barrel, he has won over friends in the Jesuit order. Barely a week after Pope Benedict XVI disclosed his dislike for the “prophets of pop” and Bob Dylan in particular, the Jesuits in Rome have embraced Waits as a Christian role model.

The latest issue of Civilta Cattolica, a Jesuit journal, the contents of which are subject to Vatican approval, says that Waits represents “the marginalised and misunderstood”.

Father Antonio Spadaro, 40, who normally writes about literature but is emerging as a Roman Catholic authority on pop music, said that Waits had lived a youthful life of “drugs, alcohol and sex” as an outcast on the streets of California.

He therefore understood “the lower depths” of society, and was able to convey the desperation of those on the margins. His past also enabled him to express their “capacity for hope and instinct for happiness” in “authentic songs devoid of vanity and false illusions”, Father Spadaro said. "