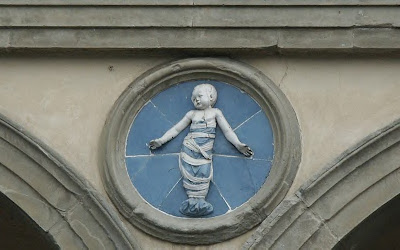 At least 23 babies have been killed so far this year, many of them beaten to death or strangled by their mothers before being dumped on wasteland and in dustbins.

Police investigating the murders are at a loss to explain the sudden surge in such cases, which have involved mothers of all ages all over the country.

Now city councils have launched an advertising campaign to highlight the problem and to promote greater use of the Baby-Klappe hatches that allow women to drop off their babies to be found and cared for without having to give their names. Posters were being put up in cities and towns across Germany yesterday, urging women to make use of the Baby-Klappe, with the slogan “Before babies land in the rubbish bin . . .”

See also http://idlespeculations-terryprest.blogspot.com/2006/12/ospedale-degli-innocenti-foundling.html
Posted by Unknown at 7:27 am