The real joys are to get away from the crowds who throng The National Gallery and to be welcomed by the members of staff, who must be the most friendly and polite attendants at any venue in what is now the huge tourist venue now know as Central London.

Truly, it is no exaggeration to say that at every visit to the Gallery, I have always been overwhelmed by the courtesy and friendliness of the staff. It sets you up again to prepare for the jostling and nerve tearing experience which can sometimes await outside.

The exhibits are always worth the visit and the entrance fee.

This month until next January (30 March 2007 – 20 January 2008) will see a special exhibition: The Art of Italy in the Royal Collection: Renaissance and Baroque.

It is the first exhibition of Italian art in the Royal Collection for over 40 years bringing together 90 paintings and 85 drawings from royal palaces and residences across Britain.

Research for the exhibition has resulted in a number of important re-attributions. Among these, two paintings previously thought to be versions of lost works by Caravaggio, The calling of Saints Peter and Andrew and A boy peeling fruit, are now generally recognised by experts as original works by him.

The website itself at http://www.royalcollection.org.uk, is also worth the time to inspect closely. For example, there are a number of micro-sites including one of an exhibition on at present entitled Amazing Rare Things.

The works in the exhibition have been selected, in collaboration with Sir David Attenborough, from five remarkable and diverse groups of natural history drawings and watercolours in the Royal Collection.

They date from the late fifteenth century to the early eighteenth century, a period when European knowledge of the world’s flora and fauna was transformed by voyages of discovery to Africa, Asia and the Americas. Through painstaking examination and description, Leonardo da Vinci, the collector Cassiano dal Pozzo, Alexander Marshal, Maria Sibylla Merian and Mark Catesby hoped to comprehend the natural riches of an ever-expanding world.

Below is a drawing by Leonardo da Vinci in the exhibition. 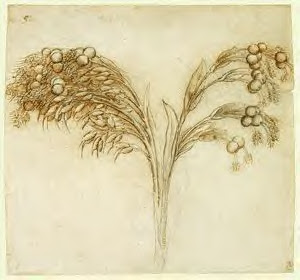 The grass known as Job’s tears was introduced to Europe from eastern Asia during the Renaissance. Leonardo’s drawing seems to be the earliest evidence for its presence in Italy.

Also of interest is the Order of Merit portrait series.

The Order of Merit was founded on the coronation of Edward VII in 1902, to be 'given to such persons, subjects of Our Crown, as may have rendered exceptionally meritorious services in Our Crown Services or towards the advancement of the Arts, Learning, Literature, and Science or such other exceptional service as We are fit to recognise'. The Order is restricted to twenty-four members.

In 1987 Her Majesty The Queen revived a tradition that each member should have a portrait drawn by a different artist.

More information about the Order of Merit can be found at http://www.royal.gov.uk/output/Page1880.asp.

Past holders of the award include:

Amongst the portraits of members are those of Graham Greene and The Reverend William Owen Chadwick. Chadwick`s portrait is below.

Owen Chadwick (b. 1916) is the leading ecclesiastical historian of our time. After graduating from St John's College, Cambridge, he took Holy Orders and was elected a fellow of Trinity Hall. He was Master of Selwyn College from 1956 until his retirement in 1983, Vice-Chancellor of the University of Cambridge between 1969 and 1971, and held the chairs of Dixie Professor of Ecclesiastical History (1958-68) and Regius Professor of Modern History (1968-83). Owen Chadwick was appointed to the Order of Merit in 1983.

On completion of the portrait, Chadwick described it in a letter as 'a green tough clerical Machiavelli. I hope I'm not like that inside but it is great fun to be it outside.' 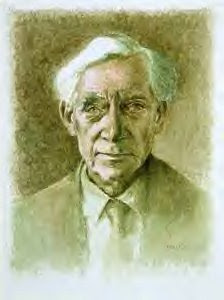 Tom Phillips (b. 1937)
The Reverend Professor Owen Chadwick, 1989
41.0 x 30.9 cm
The Royal Collection © 2006,
Her Majesty Queen Elizabeth II
Commissioned by HM The Queen for the Order of Merit portrait series