The Institution of the Eucharist 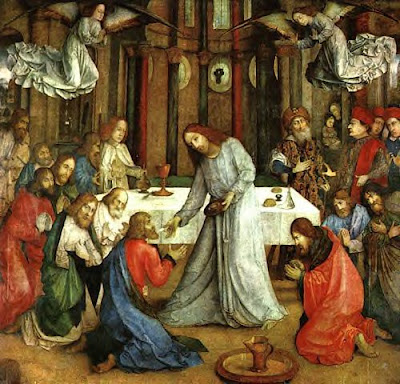 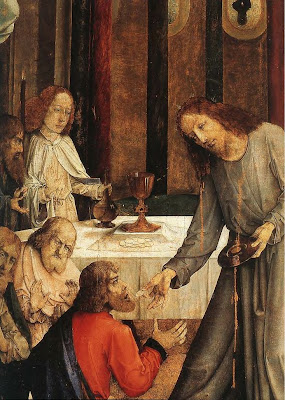 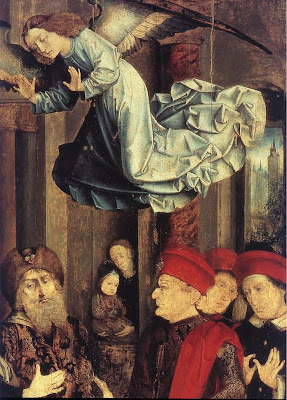 The Communion of the Apostles, is an unusual subject in Western painting. Typically, Western paintings celebrating the institution of the Eucharist represent the Last Supper with Christ and his Apostles seated in a dining room around a table adorned with wine and bread.

The picture was based on a painting by Fra Angelico that the painter may have seen at the Florentine monastery of S. Marco, in which the disciples leave the table to kneel at Christ's feet. Fra Angelico's version for Cell 35 of the Florentine monastery of S. Marco, executed between 1438 and 1445, depicts Christ giving Communion to the Apostles, seated around a table in an interior setting.

Judas, as outcast, stands apart from the other Apostles, his body cropped by the edge of the panel. He emerges red-haired, and clutching his purse filled with coins, which associates him with money and betrayal.

In the far right background, are figures from the Court of Urbino. The most recognizable figure is Duke Federigo da Montefeltro, shown in profile, with his prominent nose. There is a woman, believed to be a nurse or the duke's deceased consort Battista Sforza, with his son and heir, Guidobaldo. The duke touches the arm of a bearded man in Eastern headdress and brocade robe. He is Caterino Zeno, the ambassador of the Shah of Persia. He was a Spanish Jew serving as ambassador from Persia who converted to Christianity during his mission in Italy.

The Christian community that formed through the partaking of Christ's body also generated a local body politic centered on the duke.

Pope John Paul II wrote an Encyclical On the Eucharist in relation to the Church. For it, see:
http://www.vatican.va/holy_father/special_features/encyclicals/documents/hf_jp-ii_enc_20030417_ecclesia_eucharistia_en.html

We gather this evening in this Cathedral for the second Mass of Holy Thursday. It is called the Mass of the Lord’s Supper. The earlier Mass was the Chrism Mass. It was a magnificent assembly of priests and people, including a large number of students preparing for Confirmation. During the Mass, I blessed the holy oils for the catechumens and the sick, and I consecrated the sacred Chrism, which is used in anointing those who are baptized, confirmed and ordained to the priesthood. I spoke at that time about the priesthood of our Lord Jesus Christ and how important it is in the Church. I expressed our gratitude and support for the lives and ministry of our priests. All of us, in the presence of God’s people, renewed our commitment to sacred celibacy and faithful service.

This evening the texts of Sacred Scripture immerse us in the mystery of the Eucharist. To understand the liturgy that we are celebrating we must speak about the Eucharist itself, about the priesthood, without which the Eucharist cannot exist, and about Christ’s commandment of love and service. Jesus says: “I give you a new commandment. Love one another as I have loved you.”

Actually Saint John does not speak about the Eucharist. The other three evangelists—Matthew, Mark and Luke—describe its institution. Saint Paul does so also. Saint John, on the other hand, presumes it and goes on to speak about Christ’s attitude of love and service, which was the reason Christ instituted the Eucharist and the priesthood.

The institution of the Eucharist is beautifully described for us by Saint Paul in his Letter to the Corinthians. This Letter was written only about twenty years after the death and resurrection of Jesus. This is the first account of what took place at the Last Supper.

It precedes the accounts written by Matthew, Mark and Luke. The words that Saint Paul records are the basic formula that we hear pronounced in every Eucharist: “This is my body which will be given up for you.” “This is the cup of my blood…. It will be shed for you….” And finally: “Do this in memory of me.” Christ’s command—“Do this in memory of me”—links the Eucharist and the priesthood.

The Church teaches that the Apostles whom Jesus had chosen to celebrate the Eucharist passed on this power to their successors in the priesthood. And so tonight the command of Christ is once more fulfilled: “Do this in memory of me.”

The Last Supper was itself the anticipation of the Sacrifice that Christ would consummate on Good Friday by His death on the Cross. And so the Church teaches that each Eucharistic celebration, each Mass, is the sacramental re-enactment of the death of Jesus.

Holy Thursday for us, then, means the Mass and the priest who celebrates every Mass: our Lord Jesus Christ Himself. Holy Thursday also means the love that motivated Jesus to gather His apostles together at the Last Supper and to die for them, and for all of us, on Good Friday. Finally Holy Thursday means for us the challenge to follow Jesus in the loving service that He performs for His apostles by washing their feet. Jesus was willing to serve others generously. He was willing to give His life in sacrifice for the redemption ofthe world.

Tonight Jesus gives us the privilege of joining in the celebration of His Eucharist,which is both Sacrifice and Supper. But He also challenges us to embrace His sentiments, to take on His attitude, to love one another as He has loved us, to be willing to surrender ourselves in service to one another. “Do you realize what I have done for you?”—Jesus says to us. “You call me‘teacher’ and ‘master,’ and rightly so, for indeed I am.”

Tonight His final words to us are these: “I have given you a model to follow, so that as I have done for you, you should also do.” Dear friends: this too is Holy Thursday: a new way of loving, giving and serving; a new way to be family, to be community, to be Church; a new way to be a spouse, a parent, a son or daughter, a priest, deacon, religious or seminarian, a dedicated single person; a new way to live the life of Jesus and to follow Him to His death and resurrection. Amen. "
Posted by Unknown at 11:31 am

Email ThisBlogThis!Share to TwitterShare to FacebookShare to Pinterest
Labels: The Institution of the Eucharist (The Communion of the Apostles; Joos van Ghent; urbino; sacrament