The Agony in the Garden 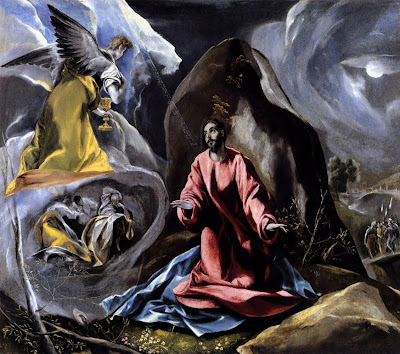 Some time ago, I mentioned in The Culture of the Images that the Compendium had fourteen images, integral to the text, illustrating and complementing the text.

The two sections of the part dedicated to prayer are illustrated with a Byzantine icon of the main liturgical feasts, and with the above painting by El Greco, which shows Jesus praying in the garden of Gethsemane, kept in the United States at the Toledo Museum of Art in Ohio.

The relevant section of the Compendium reads:

"Prayer is fully revealed and realised in Jesus

541. From whom did Jesus learn how to pray?
Jesus, with his human heart, learned how to pray from his mother and from the Jewish tradition. But his prayer sprang from a more secret source because he is the eternal Son of God who in his holy humanity offers his perfect filial prayer to his Father.

542. When did Jesus pray?
The Gospel often shows Jesus at prayer. We see him draw apart to pray in solitude, even at night. He prays before the decisive moments of his mission or that of his apostles. In fact, all his life is a prayer because he is in a constant communion of love with the Father.

543. How did Jesus pray during his passion?
The prayer of Jesus during his agony in the garden of Gethsemane and his last words on the cross reveal the depth of his filial prayer. Jesus brings to completion the loving plan of the Father and takes upon himself all the anguish of humanity and all the petitions and intercessions of the history of salvation. He presents them to the Father who accepts them and answers them beyond all hope by raising his Son from the dead.

544. How does Jesus teach us to pray?
Jesus teaches us to pray not only with the Our Father but also when he prays. In this way he teaches us, in addition to the content, the dispositions necessary for every true prayer: purity of heart that seeks the Kingdom and forgives one’s enemies, bold and filial faith that goes beyond what we feel and understand, and watchfulness that protects the disciple from temptation.

545. Why is our prayer efficacious?
Our prayer is efficacious because it is united in faith with the prayer of Jesus. In him Christian prayer becomes a communion of love with the Father. In this way we can present our petitions to God and be heard: “Ask and you will receive that your joy may be full” (John 16:24). "

The painting depicts the last night of Christ in the Garden of Gethsemane. To the left beneath the angel, the tired followers are sleeping, their unnaturally rigid robes refer to the wax models which the aged master used. Above them, in the moonlight, Christ is kneeling while an angel appears. The scene is a grassy clearing which looks like to be a lighted stage. In the background the soldiers are gathering, a statement of the inevitability of Christ's fate.

El Greco would offer return to the same subject. There are many versions of The Agony in the Garden painted by El Greco and his workshop. It was one of his most successful "products". He painted the subject both as a horizontal and as a vertical composition. The Toledo, Ohio painting is probably the prototype, or at any rate the best autograph version, of the horizontal type.

Below are later versions in vertical composition.

To some art historians, El Greco is the interpreter of an inward-turning mysticism that sprang up in Toledo during his lifetime and that emphasised private prayer. For others he remains the quintessential painter of a more public-minded Counter-Reformation ideology.

Reality and nature are not appropriate for the subject-matter. Perspective, proportion and imitation are subordinated in favour of tension, emotion, mysticism, and the transcendent.

The agitation experienced by Christ before the Passion is reflected in the way the different kinds of light, both real and supernatural. 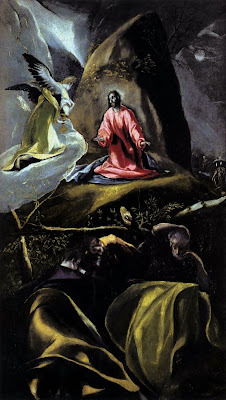 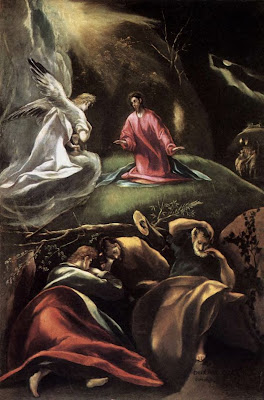 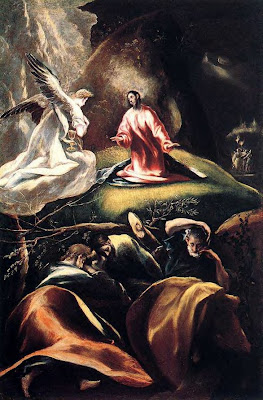