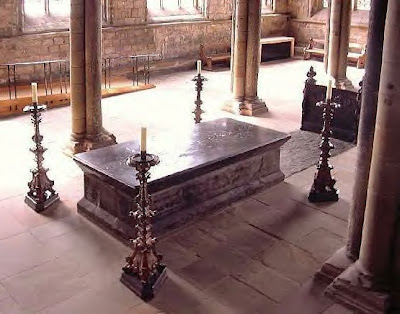 The Tomb of St Bede
The Galilee Chapel, Durham Cathedral 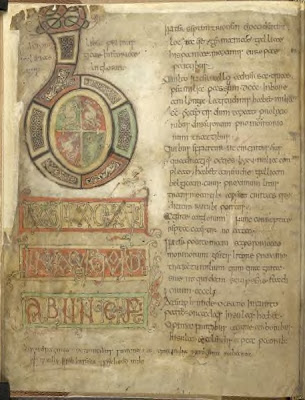 The manuscript page is the front cover from the History of the English Church and People, which was completed in 731. The manuscript in The British Library, London, itself dates from the mid 8th century and is known as the 'Cotton Tiberius A'. It has this curious name because it was once owned by Robert Cotton (1571-1631), an early collector who donated his library to the British Museum. All of Cotton's manuscripts were kept on shelves divided into sections that were identified by the bust of a Roman emperor; the Bede manuscript was kept in the 'Tiberius' section.

St Bede lived from about 673-735 and was a monk at Jarrow in Northumbria.

Almost all that is known of Bede's life is contained in a notice added by himself when he was 59 to his The History of the English Church and People (v.24), which states that he was placed in the monastery at Wearmouth at the age of seven, that he became deacon in his nineteenth year, and priest in his thirtieth, remaining a priest for the rest of his life. He was trained by the abbots Benedict Biscop and Ceolfrid, and probably accompanied the latter to Wearmouth's sister monastery of Jarrow in 682. There he spent his life, prominent activities evidently being teaching and writing. There he also died, on 26 May 735, and was buried, although his body was later translated to Durham Cathedral.

His scholarship and importance to Catholicism were recognised in 1899 when he was declared the only English Doctor of the Church as St Bede The Venerable. He is also the only Englishman in Dante's Paradise (Paradiso' X.130), mentioned among theologians and doctors of the church.

The most important and best known of his works is the Historia ecclesiastica gentis Anglorum, giving in five books and 400 pages the history of England, ecclesiastical and political, from the time of Caesar to the date of its completion (731).

Bede's use of something similar to the anno Domini era, created by the monk Dionysius Exiguus in 525, throughout Historia Ecclesiastica was very influential in causing that era to be adopted thereafter in Western Europe.

He wrote commentaries on many books of the Old and New Testaments.These commentaries reflect the biblical focus of monastic life.

He also wrote scientific works (on time, the cosmos) as well as vernacular poetry.

His theological works are still studied and cited in works such as Papal homilies and the like.

His historical works on England are often the main and only source of knowledge of the periods on which he writes.

With his writings from his monastic cell in the remote North-east of England, his influence since his time has been immense and continues to be so.

Bede
Writings on the Calendar
http://special.lib.gla.ac.uk/exhibns/month/jan2001.html

Bede: The Life and Miracles of St. Cuthbert, Bishop of Lindesfarne (721)
http://www.fordham.edu/halsall/basis/bede-cuthbert.html