Humanism and the Renaissance 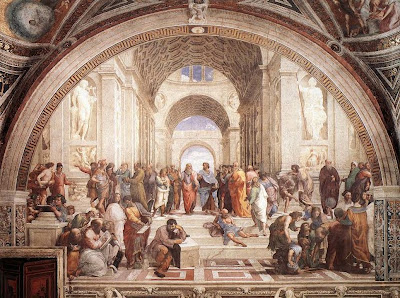 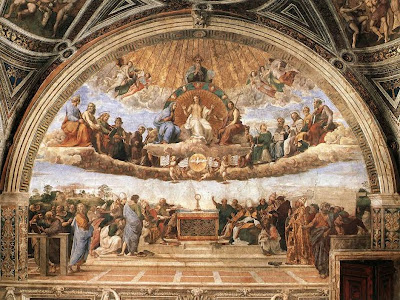 Raphael was called to Rome toward the end of 1508 by Pope Julius II.

Raphael`s greatest work is probably the decoration of the Stanza della Segnatura in the Pontifical Palaces.

Julius II commissioned Raphael with the interpretation of the philosophical scheme of the frescoes in the Stanza della Segnatura.

The four main fresco walls in the Stanza della Segnatura are occupied by the Disputa and the School of Athens on the larger walls and the Parnassus and Cardinal Virtues on the smaller walls.

The School of Athens is a complex allegory of secular knowledge, or philosophy, showing Plato and Aristotle surrounded by philosophers, past and present, in a splendid architectural setting. It illustrates the historical continuity of Platonic thought. The central figures are Plato and Aristotle at the converging point of the perspectival space. The philosophers congregate in a great basilica which is based on Bramante's design for the new St Peter's in Rome.

The Disputa, shows a celestial vision of God and his prophets and apostles above a gathering of representatives, past and present, of the Roman Catholic church. It represents the triumph of the church and the triumph of truth.

The painting is built around the monstrance containing the Eucharist. The Eucharist is the central image and theme of the painting. Without it, the meaning is lost. All the figures venerate the Host.

At the bottom of the picture space are saints, popes, bishops, priests and the mass of the faithful.

They represent the Church Militant, the Church which has acted, and which continues to act, in the world.

Raphael has placed portraits of famous personalities, both living and dead, among the people in the crowd. Bramante leans on the balustrade at left; the young man standing near him has been identified as Francesco Maria Della Rovere. Pope Julius II, who personifies Gregory the Great, is seated near the altar. Dante is visible on the right, distinguished by a crown of laurel.


From The Vatican, on 4 April 1999, Easter Sunday, Pope John Paul II issued A Letter to Artists. Amongst other things, he discussed the topic of Humanism and the Renaissance and its relevance to today.

"Humanism and the Renaissance

9. The favourable cultural climate that produced the extraordinary artistic flowering of Humanism and the Renaissance also had a significant impact on the way in which the artists of the period approached the religious theme. Naturally, their inspiration, like their style, varied greatly, at least among the best of them. But I do not intend to repeat things which you, as artists, know well. Writing from this Apostolic Palace, which is a mine of masterpieces perhaps unique in the world, I would rather give voice to the supreme artists who in this place lavished the wealth of their genius, often charged with great spiritual depth. From here can be heard the voice of Michelangelo who in the Sistine Chapel has presented the drama and mystery of the world from the Creation to the Last Judgement, giving a face to God the Father, to Christ the Judge, and to man on his arduous journey from the dawn to the consummation of history.

Here speaks the delicate and profound genius of Raphael, highlighting in the array of his paintings, and especially in the “Dispute” in the Room of the Signatura, the mystery of the revelation of the Triune God, who in the Eucharist befriends man and sheds light on the questions and expectations of human intelligence.

From this place, from the majestic Basilica dedicated to the Prince of the Apostles, from the Colonnade which spreads out from it like two arms open to welcome the whole human family, we still hear Bramante, Bernini, Borromini, Maderno, to name only the more important artists, all rendering visible the perception of the mystery which makes of the Church a universally hospitable community, mother and travelling companion to all men and women in their search for God.

This extraordinary complex is a remarkably powerful expression of sacred art, rising to heights of imperishable aesthetic and religious excellence. What has characterized sacred art more and more, under the impulse of Humanism and the Renaissance, and then of successive cultural and scientific trends, is a growing interest in everything human, in the world, and in the reality of history. In itself, such a concern is not at all a danger for Christian faith, centred on the mystery of the Incarnation and therefore on God's valuing of the human being. The great artists mentioned above are a demonstration of this. Suffice it to think of the way in which Michelangelo represents the beauty of the human body in his painting and sculpture.

Even in the changed climate of more recent centuries, when a part of society seems to have become indifferent to faith, religious art has continued on its way. This can be more widely appreciated if we look beyond the figurative arts to the great development of sacred music through this same period, either composed for the liturgy or simply treating religious themes. Apart from the many artists who made sacred music their chief concern—how can we forget Pier Luigi da Palestrina, Orlando di Lasso, Tomás Luis de Victoria?—it is also true that many of the great composers—from Handel to Bach, from Mozart to Schubert, from Beethoven to Berlioz, from Liszt to Verdi—have given us works of the highest inspiration in this field.

Towards a renewed dialogue

10. It is true nevertheless that, in the modern era, alongside this Christian humanism which has continued to produce important works of culture and art, another kind of humanism, marked by the absence of God and often by opposition to God, has gradually asserted itself. Such an atmosphere has sometimes led to a separation of the world of art and the world of faith, at least in the sense that many artists have a diminished interest in religious themes.

You know, however, that the Church has not ceased to nurture great appreciation for the value of art as such. Even beyond its typically religious expressions, true art has a close affinity with the world of faith, so that, even in situations where culture and the Church are far apart, art remains a kind of bridge to religious experience. In so far as it seeks the beautiful, fruit of an imagination which rises above the everyday, art is by its nature a kind of appeal to the mystery. Even when they explore the darkest depths of the soul or the most unsettling aspects of evil, artists give voice in a way to the universal desire for redemption.

It is clear, therefore, why the Church is especially concerned for the dialogue with art and is keen that in our own time there be a new alliance with artists, as called for by my revered predecessor Paul VI in his vibrant speech to artists during a special meeting he had with them in the Sistine Chapel on 7 May 1964. From such cooperation the Church hopes for a renewed “epiphany” of beauty in our time and apt responses to the particular needs of the Christian community."