An Irish man in Tuscany 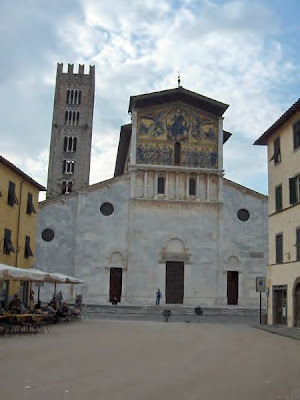 Frediano (Italian form of the Roman name Frigidian) was the Irish bishop of Lucca in the first half of the 6th century.

He was on pilgrimage to Rome. On the way he became a hermit on Monte Pisano, near Lucca where there were already other hermits. Whilst a hermit there, he was elected Bishop of Lucca and this was confirmed by Pope John II in 565.

In the seventh year of his episcopate, the Longobards despoiled Lucca and destroyed the ancient basilica.

He helped restore the city. His travels and influence as bishop extended to Florence.

He had a church built in Lucca dedicated to St. Vincent (It.: San Vincenzo), a martyr from Saragossa, Spain.

In 1104, this order was recognized by pope Paschal II. The prior of St. Frediano was later accorded a rank equal in dignity to that of a bishop.

Pope St Gregory the Great in Book 3, Chapter 9 of his Dialogues speaks of Frediano:

But I must not forget to tell you what I heard of the reverent man Venantius, Bishop of Luna, some two days ago: who said that there was, nigh unto him, a man of rare virtue called Frigidianus, Bishop of Lucca, who wrought a strange miracle, which, as he saith, all the inhabitants of that place do speak of, and it was this. Hard by the walls of the city, there runneth a river called Anser, which divers times doth so swell and overflow the banks, that it drowneth many acres of ground, and spoileth much corn and fruit. The inhabitants, enforced by necessity, seeing that this did often happen, went about by all means possible to turn the stream another way: but when they had bestowed much labour, yet could they not cause it to leave the old channel. Whereupon the man of God, Frigidianus, made a little rake, and came to the river, where all alone he bestowed some time in prayer; and then he commanded the river to follow him, and going before, he drew his rake over such places as he thought good, and the whole river, forsaking the old channel, did follow him, and kept possession of that which the holy man by that sign of his rake had appointed: and so never afterward did it hurt any more either corn or other things planted for the maintenance of men."