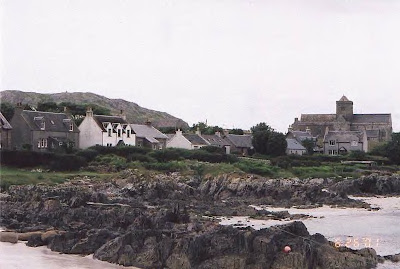 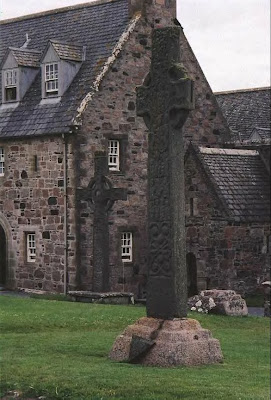 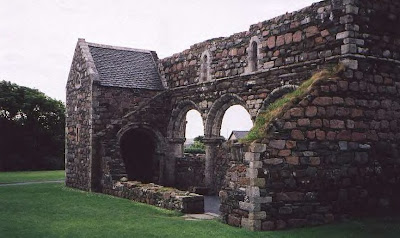 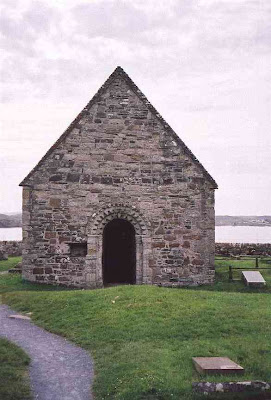 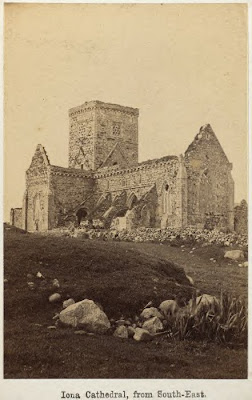 Saint Columba (7 December 521 - 9 June 597) is sometimes referred to as Columba of Iona, or, in Old Irish, as Saint Colm Cille or Columcille (meaning "Dove of the church").

Born In Ireland, he became a monk. He exiled himself from Ireland, to return only once again.

In 563 he traveled to Scotland with twelve companions, where according to his legend he first landed at the southern tip of the Kintyre peninsula, near Southend. However, being still in sight of his native land he moved further north up the west coast of Scotland. In 563 he was granted land on the island of Iona off the west coast of Scotland which became the centre of his evangelising mission to the Picts.

After spending some years among the Scots of Dalriada, Columba began the great work of his life, the conversion of the Northern Picts.

Columba's life was mainly spent in preaching the Christian Faith to the inhabitants of Northern Scotland.

From Iona he governed those numerous communities in Ireland and Caledonia, which regarded him as their father and founder. This accounts for the unique position occupied by the successors of Columba, who governed the entire province of the Northern Picts although they had received priest's orders only. It was considered unbecoming that any successor in the office of Abbot of Iona should possess a dignity higher than of the founder.

He was not only a great missionary saint but he was a statesman, a scholar, a poet, and the founder of numerous churches and monasteries. Columba’s monastery at Iona became a centre for Christianity with long reaching influence both in Ireland and Scotland. The Early History of Ireland identifies forty churces or establishments in Ireland and fifty-six in Scotland connected with St. Columba. Eventually Viking invasions lead to the abandonment of Iona as a major religious centre and as early as 804 the decision was taken to set up a new headquarters at Kells in Ireland.

He died the same year St. Augustine landed in Kent.

First buried on Iona, his relics were later transferred to Downpatrick to lie alongside St. Patrick and St. Bridget.

A convent for the Order of Benedictine Nuns was established in 1203, with Beathag, daughter of Somerled, as first prioress. The present Benedictine abbey was built in the same period.

Numerous martyrs and other saints were produced from Iona, including not only St. Columba but also St. Aidan of Lindisfarne and others. The monastery survived until the Reformation.