The Cathedral of Christ the King, La Spezia 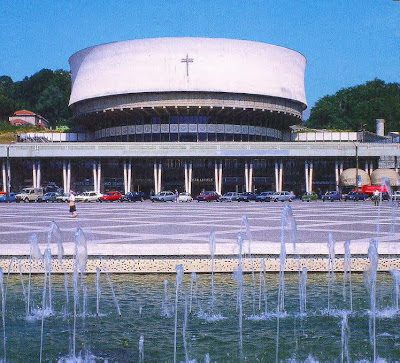 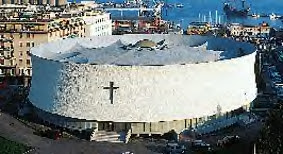 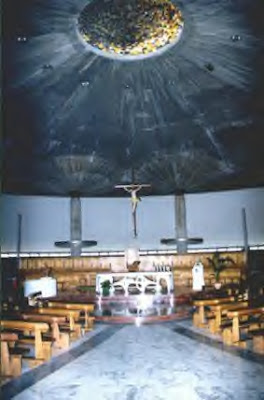 No. It`s not the Houston Astrodome. It`s the Cathedral of Christ the King(Cattedrale di Cristo Re)in La Spezia.

It was built on a small hill called the Hill of the Cappuchins in what is now an area between the old city and its more modern extensions.

It overlooks the Piazza dell`Europa and then further, the Gulf of La Spezia.

The project began in 1959 under the architect Adalberto Libera and finished under Cesare Galeazzi from 1971- '75.

It was consecrated by Cardinal Joseph Siri, the Archbishop of Genova in 1975.

The architectural concept was that the people of God would be reunited inside the circular structure. Everything (including the pews) faces towards the altar which is the focus of the cathedral. The roof is held up by twelve columns, which are in abstract fashion meant to represent the Twelve Apostles.

Concrete is the dominant material in construction.

Immediately underneath the Cathedral sanctuary are Cathedral offices and a Convent.

The Cathedral replaced an earlier Cathedral which is still in the old town.

The main problems regarding the Cathedral are the site itself and access to the cathedral.

There are two means of access: the north and the south.

The main and only doors to the Cathedral are on the North side of the Cathedral, that is, the highest part of the small hill. It is the side which has its back to the sea. One can approach the north side by a small road. It is distant from houses. It is all right if one has a car. Very difficult is one is travelling by foot.

From the south (Piazza dell`Europa), one crosses the main street and into a covered loggia or passeggiata of shops. The passeggiata has two main flights of stairs leading to a concrete walkway and there are further paths and walkways to get to the entrance of the cathedral. From the main street to the entrance one walks about 800 metres in an upwards direction- mainly stairs.

Not convenient if one does not have a car and one is old, infirm, or disabled. It is not the sort of structure one can visit with a pram.

All of which is a pity.

But cathedrals are built for the longer term. The access problems might be large just now but can be surmounted. Who knows what might happen in the next hundred years ?

Built on the main street on the same level as the shops is the Crypt of the Cathedral.It is the Madonna Pellegrina.

It was built and in use since 25th October 1958. Although it is called the Crypt of the Cathedral, it is certainly not attached to the Cathedral physically and is some distance away.
Posted by Unknown at 5:02 pm