The Adoration of the Kings: National Gallery Picture of the Month

The website of The National Gallery in London has a "Picture of the Month". This month, it is The Adoration of the Kings by BRUEGEL, Pieter. 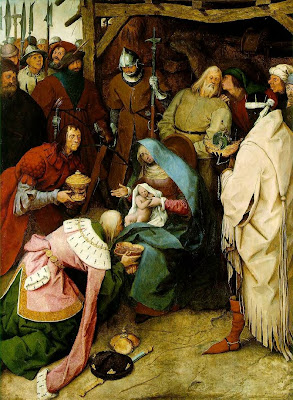 In this unusual rendering of the Adoration, the Three Kings presenting their gifts are treated as caricatures and the Virgin is not idealised. The work is composed from a high viewpoint, focusing attention on the Infant Christ on his mother's lap, at the exact centre of the picture. People crowd around them and there is little sense of depth or space. The elongated figures of the Kings are characteristic of a painting style that was fashionable around this time.

A figure on the extreme right wears spectacles. His presence may indicate that those around Christ are blind to his significance; Bruegel has used spectacles on other occasions to signify in an ironic manner the inability of the subject to see the truth. Most of the figures, in fact, appear to be gently mocked by the artist.

It is uncommon for soldiers to be included in a depiction of the Adoration. As in other works by Bruegel, their presence may reflect the Spanish occupation of the Netherlands at this time.

Email ThisBlogThis!Share to TwitterShare to FacebookShare to Pinterest
Labels: breugel; adoration of the kings; national gallery