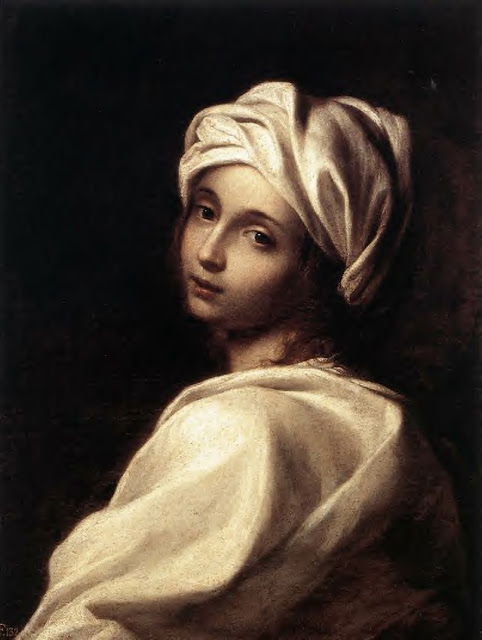 "The portrait of Beatrice di Cenci, in the Palazzo Berberini, is a picture almost impossible to be forgotten. Through the transcendent sweetness and beauty of the face, there is a something shining out, that haunts me. I see it now, as I see this paper, or my pen. The head is loosely draped in white; the light hair falling down below the linen folds. She has turned suddenly towards you; and there is an expression in the eyes—although they are very tender and gentle—as if the wildness of a momentary terror, or distraction, had been struggled with and overcome, that instant; and nothing but a celestial hope, and a beautiful sorrow, and a desolate earthly helplessness remained.

Some stories say that Guido painted it, the night before her execution; some other stories, that he painted it from memory, after having seen her, on her way to the scaffold. I am willing to believe that, as you see her on his canvas, so she turned towards him, in the crowd, from the first sight of the axe, and stamped upon his mind a look which he has stamped on mine as though I had stood beside him in the concourse. The guilty palace of the Cenci: blighting a whole quarter of the town, as it stands withering away by grains: had that face, to my fancy, in its dismal porch, and at its black, blind windows, and flitting up and down its dreary stairs, and growing out of the darkness of the ghostly galleries. The History is written in the Painting; written, in the dying girl’s face, by Nature’s own hand. And oh! how in that one touch she puts to flight (instead of making kin) the puny world that claim to be related to her, in right of poor conventional forgeries!"

The story of Beatrice di Cenci held a fascination for many since the 16th Century. It is quickly told.
The story tells of a beautiful teenage girl who kills her brutal father to protect her virtue from his incestuous advances; who resists interrogation and torture with unswerving courage; and who goes to her execution unrepentant, and borne along on a wave of popular sympathy.
The affair was a cause célèbre, which echoed briefly through the newsletters of the day: 'The death of the young girl, who was of very beautiful presence and of most beautiful life, has moved all Rome to compassion'; 'She was 17 and very beautiful'; 'She was very valorous' at her death, unlike her stepmother, who was a 'rag'.
The bald facts of the case do not go very far in explaining the passionate interest it has aroused, which has little to do with the actual murder of Count Cenci: on that, posterity's verdict is a simple 'good riddance'. It is rather the particular quality - real or imagined - of the person who has become the protagonist, the star, of the story: Beatrice di Cenci.
In that comparisons and contrasts can be made with Madeleine Smith and to Elizabeth Borden, both murderers who were young girls at the time of the commission of the crimes.But in the latter cases, no verdict of "guilty" was pronounced and no execution was carried out.
There have been many literary treatments of the story:
Beatrice Cenci, a novel by Francesco Domenico Guerrazzi
Les Cenci, novel by Stendhal
Percy Bysshe Shelley's verse drama The Cenci: A Tragedy in Five Acts, composed at Rome and at Villa Valsovano near Livorno, May–August 5, 1819, published spring 1820 by C. & J. Ollier, London, 1819)
Nemesis, tragedy by Alfred Nobel.
Beatrice Cenci, a play by Alberto Moravia
Beatrix Cenci, opera by Alberto Ginastera
Les Cenci (1935), play by Antonin Artaud
The Cenci, essay by Alexandre Dumas in Volume 1 of Celebrated Crimes
The Cenci (1951-52), an opera by Havergal Brian (abridged from Shelley's play)
The painting of Beatrice di Cenci by Mannerist painter Guido Reni (1575-1642) and the legend surrounding Beatrice figures prominently in Nathaniel Hawthorne's Marble Faun (1860). The book's two principal female characters, Hilda and Miriam, debate the nature and extent of Beatrice's guilt. Hilda believes Beatrice's act to be "inexpiable crime" but Miriam believes it was "no sin at all, but the best possible virtue in the circumstances". Hawthorne draws many similarities between Miriam and Beatrice and the reader must debate whether or not Miriam is an avenger or a culprit.
An Italian film about her story, directed by Lucio Fulci, was released in 1969.
The Canadian opera Beatrice Chancy, written by George Elliott Clarke and James Rolfe (and inspired by the Shelley play), transplanted the story to a 19th century Nova Scotia setting. Harriet Goodhue Hosmer sculpted the marble Beatrice Cenci (1857) which resides at the Mercantile Library of St Louis.
As regards the painting of Beatrice which apparently haunted Dickens, most scholars now agree that it was not painted by Guido Reni. While the canvas is traditionally attributed to Reni, its poor quality in comparison to other works of the master has led many critics to reject it as an autograph work. Instead, it could be by a painter in the immediate circle of Reni, possibly Elisabetta Sirani, who is known for rendering the master's models in abbreviated and reduced form.Elisabetta Sirani, Italian woman painter (b. 1638, Bologna, d. 1665, Bologna) was the daughter of Giovanni Andrea Sirani, who had been the principal assistant of Guido Reni. Her talent was encouraged by the writer Malvasia, who later wrote an adulatory biography of her in his Felsina Pittrice (1678).She was active by 1655, and by 1662 she had recorded about ninety works, executing at least another eighty before she died at the age of 27. None of her portraits has survived but religious, mythological and allegorical subjects were painted in full view of a crowd of admirers. Her style is close to Reni's - idealized, affecting, sentimental, but with strong chiaroscuro and fine colour.
It has been hypothesized that Caravaggio was present at the decapitation and was thus inspired to paint his Judith cutting off the Head of Holofernes. The precise and realistic rendering of Caravaggio's scene, anatomically and physiologically correct to the minutest details, presupposes the artist's observation of a real decapitation.
References:
Article on Beatrice di Cenci http://en.wikipedia.org/wiki/Beatrice_Cenci
Screaming in the Castle by Charles Nicholl http://www.lrb.co.uk/v20/n13/nich02_.html
The agony of Beatrice Cenci http://www.museocriminologico.it/cenci_uk.htm
Cheney, Edward. "Letter of Beatrice Cenci, with Remarks on Her Portrait by Guido." Philobiblon Society, Vol. 6, 1861, p. 2-8. http://www.public.asu.edu/~cajsa/sensation/cheney_letter/
Palazzo Cenci http://romeartlover.tripod.com/Vasi29.html
THE CENCI by Shelley http://www2.lingue.unibo.it/Romanticismo/ENGLISH/THE_CENCI.HTMhttp://www.mmdtkw.org/VBeatriceCenci.html Shelly's View of Beatrice Cenci Portrait http://www3.baylor.edu/~Jesse_Airaudi/Documents/readings/Shelleycenciportrait.html
Images Related to "Rappaccini's Daughter" http://www.hawthorneinsalem.org/Literature/Hawthorne&Women/Rappaccini/Images.html
Posted by Unknown at 11:32 am