Dante and The Divine Comedy 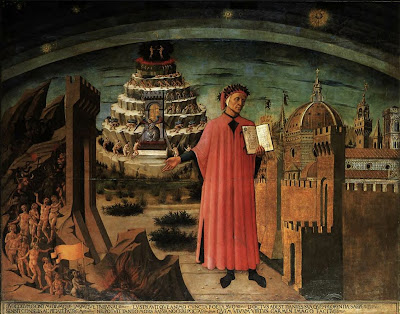 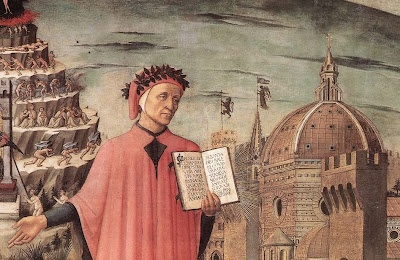 Detail of above picture

The artist named himself after his master, a certain Michelino.

He had his painterly training under Fra Angelico whose assistant he also became. His style is similar to that of Filippo Lippi and Pesellino

The painting shows Dante who holds his book the "Divina Commedia". The Divine Comedy talks of Dante's journey through Hell, Purgatory and Paradise. Hell is on his right. Behind him there is Mount Purgatory with its seven terraces. On the peak of Mount Purgatory, there is Adam and Eve who represent Earthly Paradise.
In this painting the three kingdoms are represented: the Purgatory in the centre background, the Hell at left, and the heavenly City at right. This painting is especially interesting because it shows us, apart from scenes of the Divine Comedy, a view of Florence in 1465, a Florence such as Dante himself could not have had.

Dante's Inferno: Down among the sinners
Nov 30th 2006
From The Economist

Dante's voice, after 700 years, still speaks to us directly
By
Corbis

TWO literary colossi, one English, the other Italian, bestride the map of Europe: William Shakespeare and Dante Alighieri. Chronologically, Dante is the more remote; he died of malaria in 1321 almost 250 years before Shakespeare was born. Yet Dante's greatest work, a long poem in three parts called “Commedia” or “The Divine Comedy”, lives on as if written the other day, translations into English appearing with clockwork regularity.

This year's version by Sean O'Brien, a poet who grew up in the north of England, is a verse translation of “Inferno”, the first of the three segments into which the epic is divided (the other two are “Purgatory” and “Paradise”). In 2002 Ciaran Carson, a poet born in Belfast, produced a translation of the same segment suffused with the violence of his city's political and religious conflict. In the 1990s, Robert Pinsky, an American poet laureate, wrote a racier and suppler version. And, in the early 19th century, John Keats, an English poet, was absorbed by a Dante that had been translated into English blank verse by the Reverend Henry Francis Cary, an exercise that made Dante sound a bit like a playwright in Shakespeare's time.

So it goes on. Poets and other writers continue to re-cast Dante in their chosen image. Why do we refuse to let him go?

Here is the story, in brief. A lonely pilgrim—it is Dante himself—strays into a dark wood, and is guided by the Roman poet Virgil down into Hell to contemplate the harrowing fate of the damned. He is then led up through Purgatory, and, in the final poem, to Paradise, where he meets a transfigured vision of Beatrice, the girl he had loved in Florence as a young man. The epic ends with a vision of the glory of God.

As a judicious new biography by Barbara Reynolds explains, Dante may have seen something of his own life in that of his howling sinners, bound eternally to a stake in a stinking Inferno. It was his fate as a man, and the ferocity of his response to that fate, which gives such enduring energy to his verse. Falling foul of vicious political factionalism, Dante was sent into exile from his beloved Florence in his mid-30s. He never returned.

His great work, written in exile, is a dramatisation of his own fate, an extended attack upon his enemies—and, incidentally, the first great work to be written in his native Tuscan. He was passionate, throughout his life, about the need to create a vernacular written language that would throw off the shackles of Latin. In “The Divine Comedy” he does so, single-handedly forging a tool of expression that became the literary language of Italy.

Dante's vernacular remains an exciting language for poets to engage with because it still feels, linguistically, within our reach. Read the first three lines of the opening stanza, and see that his chosen words are even closer to modern Italian than Shakespeare's words are to modern English.

(Once, halfway through the journey of our life,
I found myself inside a shadowy wood,
Because the proper road had disappeared.)
Translated by Sean O'Brien

It is this immediacy of language that helps to bring Dante's medieval world, for all its complex and often baffling symbolism, closer to us than we could have hoped. And Mr O'Brien's “Inferno”, at its best, has a plain, urgent readability, combined with a muscular forcefulness.

We made a wide arc as we walked around
The lake between the dry land and the swamp,
Our eyes transfixed by dead men gobbling mud…
(Canto VII, lines 127-129)

One of the hardest things to do with Dante is to render his often convoluted theological and philosophical arguments into an English which maintains a sustained readable flow. Mr O'Brien generally does so, matching clarity with intricacy. Where he has failed is in his rhyme scheme. Dante's is complicated: ABA, BCB, CDC, DED and so on. By knotting the verse together, like the design on a Celtic cross, the rhyme scheme compels the poem forward from stanza to stanza. Mr O'Brien abandons it, without explanation.

To match the rhyme scheme is very difficult—though some have tried. For instance, the verses that Ms Reynolds quotes in her biography follow the original, but the translation often feels awkward. It is by Dorothy L. Sayers, a celebrated crime writer, and was first published in 1949 (the Sayers “Inferno”, re-titled “The Descent into Hell” was re-published this year in the Penguin Epics series at $8.95 and £4.99. Accessibly cheap, but it has been surpassed by other translations).

Dante speaks to us in an impassioned human voice that is often aggrieved and vengeful. He wanders through a mysterious world of arcane theology. But many of the monsters who wallow in the depths of his imaginative creation are ones we recognise. They are like us. Which may be why we still cleave to his great poem.