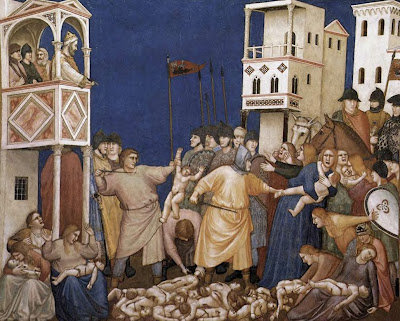 Holy Innocents’ Day or Childermas, whether or not because of Herod's massacre, was formerly peculiarly unlucky; it was a day upon which no one, if he could possibly avoid it, should begin any piece of work. It is said of that superstitious monarch, Louis XI. of France, that he would never do any business on that day, and of the English Edward IV. that his coronation was postponed, because the date originally fixed was Childermas.

In Cornwall no housewife would scour or scrub on Childermas, and in Northamptonshire it was considered very unlucky to begin any undertaking or even to do washing throughout the year on the day of the week on which the feast fell. Childermas was there called Dyzemas and a saying ran: “What is begun on Dyzemas Day will never be finished.” In Ireland it was called “the cross day of the year,” and it was said that anything then begun must have an unlucky ending.﻿

The Holy Innocents were the patron saints of amongst others, choirboys.

In Christmas in Ritual and Tradition by Clement A. Miles [1912]
http://www.sacred-texts.com/time/crt/index.htm there is some explanation. The day was related to the Feast of Fools and the revel known as The Boy Bishop.

Of older standing than the Feast of Fools were the Christmas revels of the deacons, the priests, and the choir-boys. They can be traced back to the early tenth century, and may have originated at the great song-school of St. Gall near Constance.

The most important of the three feasts was that of the boys on Holy Innocents’ Day, a theoretically appropriate date.

Corresponding to the “lord” of the Feast of Fools was the famous “Boy Bishop,” a choir-boy chosen by the lads themselves, who was vested in cope and mitre, held a pastoral staff, and gave the benediction. Other boys too usurped the dignities of their elders, and were attired as dean, archdeacons, and canons.

Offices for the festival, in which the Boy Bishop figures largely, are to be found in English, French, and German service-books, the best known in this country being those in the Sarum Processional and Breviary. In England these ceremonies were far more popular and lasting than the Feast of Fools, and, unlike it, they were recognized and approved by authority, probably because boys were more amenable to discipline than men, and objectionable features could be pruned away with comparative ease.

The festivities must have formed a delightful break in the year of the mediaeval schoolboy, for whom holidays, as distinguished from holy-days for church-going, scarcely existed. The feast, as we shall see, was by no means confined within the church walls; there was plenty of merrymaking and money-making outside.

Minute details have been preserved of the Boy Bishop customs at St. Paul's Cathedral in the thirteenth century. It had apparently been usual for the “bishop” to make the cathedral dignitaries act as taper- and incense-bearers, thus reversing matters so that the great performed the functions of the lowly.

In 1263 this was forbidden, and only clerks of lower rank might be chosen for these offices. But the “bishop” had the right to demand after Compline on the Eve of the Innocents a supper for himself and his train from the Dean or one of his canons. The number of his following must, however, be limited; if he went to the Dean's he might take with him a train of fifteen: two chaplains, two taper-bearers, five clerks, two vergers, and four residentiary canons; if to a lesser dignitary his attendants were to be fewer.

On Innocents’ Day he was given a dinner, after which came a cavalcade through the city, that the “bishop” might bless the people. He had also to preach a sermon﻿—no doubt written for him."
Posted by Unknown at 8:24 am