Cellini and a Portrait of Bembo 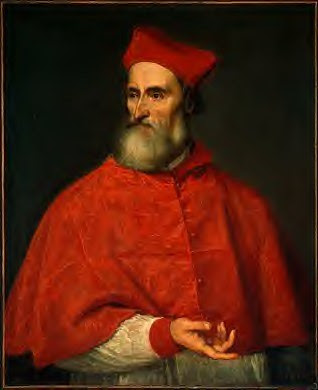 In 1537, Cellini was on the move again. In his Autobiography, he gives an account of meeting Pietro Bembo, later to become Cardinal Bembo.

The son of a Venetian statesman, Pietro Bembo (1470–1547) is recognized as one of the most celebrated diplomats, poets, and humanist scholars of the sixteenth century. In 1513, after taking Holy Orders, he became secretary to Pope Leo X in Rome. Bembo was appointed librarian of St. Mark's Cathedral in 1530, and he became official historian for the city of Venice.

Bembo is regarded as one of the most influential figures in the world of Italian literature during the Renaissance. He edited the works of Petrarch and Dante, insisted on the classics as contemporary models, and helped ensure Tuscan became the standard language for Italian letters.

Bembo appears as a character in Castiglione's celebrated treatise on ideal courtly behaviour, Il Cortegiano [The Courtier]. His own works include verse in Latin and Italian, as well as a history of Venice and a celebration of Platonic love, Gli Asolani [The Asolans].

He was promoted to cardinal in 1538 by Pope Paul III. His portrait was painted by Raphael and Titian, amongst others. Bembo died in Rome in 1547.

The font or print "Bembo" was named after him.

"From home I travelled to Florence, from Florence to Bologna, from Bologna to Venice, and from Venice to Padua. There my dear friend Albertaccio del Bene made me leave the inn for his house; and next day I went to kiss the hand of Messer Pietro Bembo, who was not yet a Cardinal.

He received me with marks of the warmest affection which could be bestowed on any man; then turning to Albertaccio, he said: “I want Benvenuto to stay here, with all his followers, even though they be a hundred men; make then your mind up, if you want Benvenuto also, to stay here with me, for I do not mean elsewise to let you have him.”

Accordingly I spent a very pleasant visit at the house of that most accomplished gentleman. He had a room prepared for me which would have been too grand for a cardinal, and always insisted on my taking my meals beside him.

Later on, he began to hint in very modest terms that he should greatly like me to take his portrait. I, who desired nothing in the world more, prepared some snow-white plaster in a little box, and set to work at once.

The first day I spent two hours on end at my modelling, and blocked out the fine head of that eminent man with so much grace of manner that his lordship was fairly astounded. Now, though he was a man of profound erudition and without a rival in poetry, he understood nothing at all about my art; this made him think that I had finished when I had hardly begun, so that I could not make him comprehend what a long time it took to execute a thing of that sort thoroughly. At last I resolved to do it as well as I was able, and to spend the requisite time upon it; but since he wore his beard short after the Venetian fashion, I had great trouble in modelling a head to my own satisfaction.

However, I finished it, and judged it about the finest specimen I had produced in all the points pertaining to my art. Great was the astonishment of Messer Pietro, who conceived that I should have completed the waxen model in two hours and the steel in ten, when he found that I employed two hundred on the wax, and then was begging for leave to pursue my journey toward France.

This threw him into much concern, and he implored me at least to design the reverse for his medal, which was to be a Pegasus encircled with a wreath of myrtle. I performed my task in the space of some three hours, and gave it a fine air of elegance. He was exceedingly delighted, and said: “This horse seems to me ten times more difficult to do than the little portrait on which you have bestowed so much pains. I cannot understand what made it such a labour.”

All the same, he kept entreating me to execute the piece in steel, exclaiming: “For Heaven’s sake, do it; I know that, if you choose, you will get it quickly finished.” I told him that I was not willing to make it there, but promised without fail to take it in hand wherever I might stop to work.

While this debate was being carried on I went to bargain for three horses which I wanted on my travels; and he took care that a secret watch should be kept over my proceedings, for he had vast authority in Padua; wherefore, when I proposed to pay for the horses, which were to cost five hundred ducats, their owner answered: “Illustrious artist, I make you a present of the three horses.” I replied: “It is not you who give them me; and from the generous donor I cannot accept them, seeing I have been unable to present him with any specimen of my craft.” The good fellow said that, if I did not take them, I should get no other horses in Padua, and should have to make my journey on foot.

Upon that I returned to the magnificent Messer Pietro, who affected to be ignorant of the affair, and only begged me with marks of kindness to remain in Padua. This was contrary to my intention, for I had quite resolved to set out; therefore I had to accept the three horses, and with them we began our journey. "