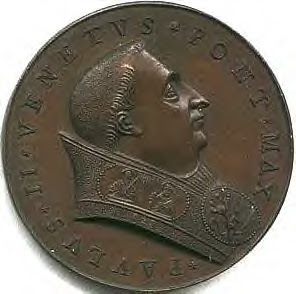 Above two images: those of Paul II 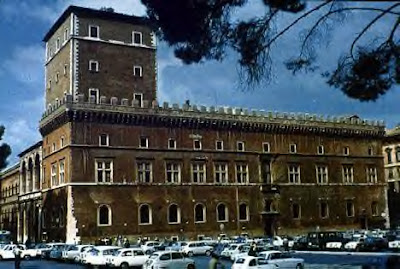 At the time of the death of the pope there were twenty-nine living cardinals. Nineteen cardinals attended the conclave and ten were absent.

The membership of the College included twelve Italians, seven French, six Spanish, two Germans, one Greek, and one Hungarian.

One cardinal still survived from among those created by John XXIII, Pierre de Foix l'Ancien, but none survived from the creations of Martin V.

Ten of the cardinals did not attend the conclave, however. They were Foix, Schaumberg, Szechy, Rolin, del Mila y Borja, Jouffroy, von Weisbriach, Cardona, Eruli and Forteguerri. Only the last two were Italians.

On the morning of August 25, 1464, the nineteen cardinal-electors reunited in the palace of Cardinal Ludovico Trevisan, to make plans for the coming conclave. It was finally decided to hold the electoral proceedings in the Vatican.

On the evening of August 28, the cardinals entered the conclave, with the exception of the gravely ill Juan de Torquemada, who was carried into the meeting on the following day.

Despite the fact that the majority of the electors had been created cardinals by Pius II, these cardinals did not vote or act en bloc. Indeed there would appear to have been a very strong reaction amongst the cardinals against the policies pursued by Pius II. This is evidenced by the capitulations sworn to by all except one.

It is perhaps not surprising that there was not a reaction to the pontificate of Pius II. In any event, there is evidence from more recent conclaves of this happening. But in this case, Pius II had dragged them (many unwilling) up the top of the hill of Ancona. Then, when it was clear that the policy was a failure, he did not lead them down again. He died. They were left to clear up the mess. Some must have wondered what message there was in Divine Providence causing such a catastrophic failure.

The effect of the capitulations would have been to turn the elected cardinal into a President of the College of Cardinals rather than Pope. The capitulations provided that:

- the pope was to continue the war against the Turks
- he was not to journey to any city outside Rome without the consent of a majority of the cardinals, nor was he to leave Italy without the consent of all the cardinals.
- all creations of new cardinals, as well as all advancements to important benefices, were to be made only with the consent of the College
- the discipline of the ancient Roman Court was to be re-established
- a General Council was to be established within three years
- the college of cardinals was not to be increased beyond 24 in number
- no one was to be created cardinal who was not thirty years of age, deficient in civil and canon law or ignorant of Holy Scriptures
- no more than one cardinal was to be created from the relatives of the reigning Pope
- no cardinal was to be condemned except according to legal and canonical forms
- he was not to enter any war or sign any treaty without the consent of the College of Cardinals
- he was to leave the members of the Roman Court freedom to make Wills in any wish they wanted
- no new taxes were to be imposed
- existing taxes were not to be increased
- he was to take the votes of the Cardinals aloud and not in a whisper so that the result of the deliberations were to be accurately expressed
- the cardinals were to meet twice a year outwith the presence of the Pope to examine whether the conditions had been satisfied.


On the first scrutiny, Pietro Barbo from Venice, the cardinal-nephew of Eugenius IV, received eleven votes. The remaining eight went to Trevisan and to d'Estouteville, the perennial candidate.

In the following accessus on 30 August 1464, Barbo received three more votes and was accordingly elected. He took the name Paul II.

History has not been particularly kind to Paul II - perhaps unfairly.

He was born at Venice, 1417, the son of Niccolo Barbo and Polixena Condulmer, sister of Eugene IV.

At the elevation of his uncle to the papacy, he entered the ecclesiastical state. He became Archdeacon of Bologna, Bishop of Cervia and of Vicenza, and in 1440 cardinal-deacon.

He was very influential under Eugene IV, Nicholas V, and Calixtus III, less so under Pius II.

He built the Palazzo San Marco (later known as the Palazzo Venezia) as his personal residence in 1455-64.After his election as Pope Paul II he had it amplified with the erection of another little palace, called Palazzetto Venezia. This little palace has been moved to the left side of the big palace after the construction of the Vittoriano. The palace represents the first example in Rome of the Renaissance style of Leon Battista Alberti.

After being a papal residence, it became the Embassy of the Republic of Venice. It was taken over by the French in the Eighteenth Century. It is perhaps best known today as where Mussolini had his office as Prime Minister and from whose balcony he harangued the crowds on special occasions.

He was born a collector: from his early youth. He devoted himself to searching all over Italy for antique gems and coins, and Byzantine stuffs and jewelry. The passion for antique and precious works did not abate with his election to the pontifical throne.

There came a moment when his mania rose to almost heroic proportions. He did not scruple to lay hands on miraculous images of the Blessed Virgin, if they were remarkable or curious from an artistic point of view, such, for instance, as the one preserved in the church of S. Maria in Campitelli, made in opus sectile, that is to say, in a kind of Florentine mosaic of precious stones.

He had at one time a plan for removing to his palace the library of the Benedictine Abbey of Monte Cassino.

He offered to build at his own cost, for the township of Toulouse, a bridge across the Garonne, in exchange for a single cameo.

Eugène Müntz compiled a famous partial Inventory of his treasures and this Inventory is still used today in art history and the tracing of provenances of jewels and ornaments.

The Inventory includes forty-seven works in bronze; two hundred and twenty-seven cameos; three hundred and twenty-five intaglios, mostly portraits of emperors and empresses; ninety-seven gold coins and one thousand silver ones (among which two were forged); ten Byzantine cameos, ; twenty-five Byzantine mosaic pictures, two pictures in stained glass; many ivory carvings; and many antique embroideries in silk and gold. As regards the works of the Renaissance goldsmiths and the silver plate, the figures of the inventory are simply astonishing. Pearls, turquoises, jacinths, emeralds, amethysts, diamonds, mostly mounted in rings and signets, are numbered by thousands. As for silver plate, one need only mention two wine-jugs of exquisite workmanship, each weighing one hundred and ten pounds.

After his election, he immediately declared that the election capitulations,which cardinals had long been in the habit of affirming as rules of conduct for future popes, could affect a new pope only as counsels, not as binding obligations.

He opposed with some success the domineering policy of the Venetian government in Italian affairs .

His repeated condemnations of the Pragmatic Sanction of Bourges resulted in strained relations with Louis XI. of France .

He pronounced excommunication. and deposition against King George Podiebradon the 23rd of December 1466 for refusal to enforce the Basel agreement against the Utraquists, and prevailed on Matthias Corvinus, king of Hungary, to declare war against him on the 31st March 1468 . Matthias was notparticularly successful, but George Podiebrad died on the 22nd of March 1471 .

The pope carried on fruitless negotiations (1469) with the emperor Frederick III. for a crusade against the Turks .

Paul endeavoured to make drastic reforms in the curia, and abolished the college of abbreviators (1466), but this called forth violent protests from the historian Platina, one of their number and subsequently librarian under Sixtus IV., who is responsible for the fiction that Paul was an illiterate persecutor of learning .

It is true that the pope suppressed the Roman academy, but on religious grounds .

On the other hand he was friendly to Christian scholars; he restored many ancient monuments; and probably first introduced printing into Rome .

Paul embellished the costume of the cardinals, collected jewels for his own adornment, provided games and food for the Roman people and practically instituted the carnival .

He began in 1469 a revision of the Roman statutes of work which was not completed until 1490 .

Paul established the special tax called the quietdennium in 1470, and by bull of the same year announced the jubilee for every twenty-five years .

He began negotiations with Ivan III for the union of the Russian Church with the Roman see .

Paul was undoubtedly not a man of quick parts or unusual views, but he was handsome, attractive, strong-willed, and has never been accused of promoting nephews or favourites .

He died very suddenly, probably of apoplexy, on the 26th of July, 1471, and was succeeded by Sixtus IV .