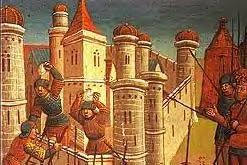 BBC Radio 4
In Our Time

When Sultan Mehmet the Second rode into the city of Constantinople on a white horse in 1453, it marked the end of a thousand years of the Byzantine Empire. After holding out for 53 days, the city had fallen. And as one contemporary witness described it: “The blood flowed in the city like rainwater in the gutters after a sudden storm”. It was the end of the classical world and the crowning of an Ottoman Empire that would last until 1922.

Constantinople was a city worth fighting for – its position as a bridge between Europe and Asia and its triangular shape with a deep water port made it ideal both for trade and defence. It was also rumoured to harbour great wealth. Whoever conquered it would reap rewards both material and political.

Earlier attempts to capture the city had largely failed – so why did the Ottomans succeed this time? What difference did the advances in weaponry such as cannons make in the outcome of the battle? And what effect did the fall of Constantinople have on the rest of the Christian world?

Also available as free MP3 podcast or download.
Posted by Unknown at 10:40 am