The marble quarries of Carrara lie in the Apuane Mountains.The white that you see is not snow but marble dust.

The older photographs demonstrate the techniques that Dickens would have seen in his visit in the 1840s. 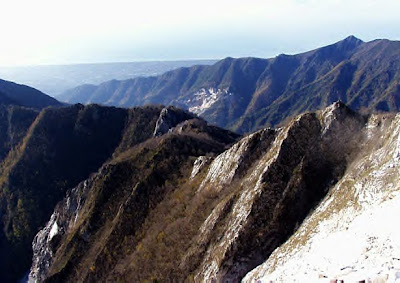 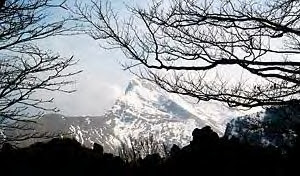 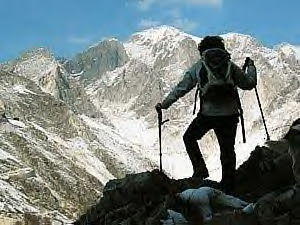 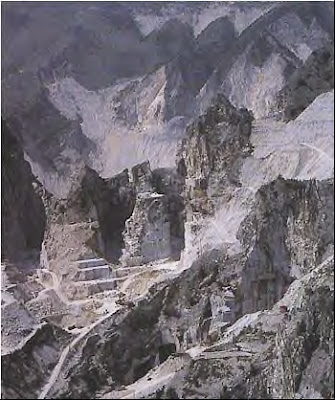 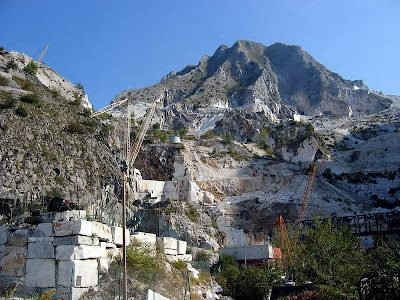 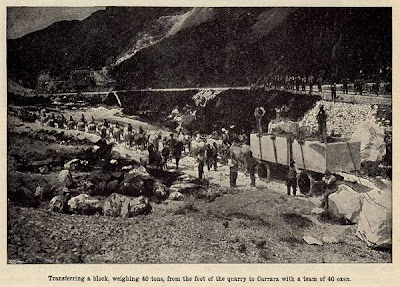 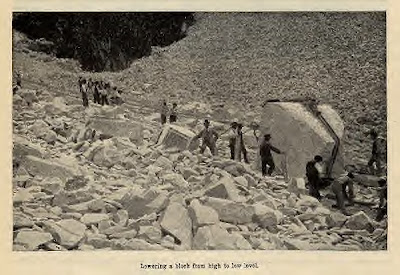 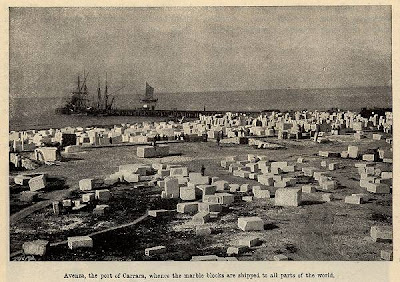 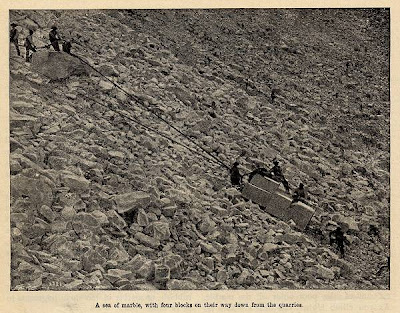 In Chapter 9 of his book of his travels in Italy, Dickens wrote:

"We arrived at Carrara, within a few hours. In good time next morning, we got some ponies, and went out to see the marble quarries.

They are four or five great glens, running up into a range of lofty hills, until they can run no longer, and are stopped by being abruptly strangled by Nature. The quarries, ‘or caves,’ as they call them there, are so many openings, high up in the hills, on either side of these passes, where they blast and excavate for marble: which may turn out good or bad: may make a man’s fortune very quickly, or ruin him by the great expense of working what is worth nothing. Some of these caves were opened by the ancient Romans, and remain as they left them to this hour. Many others are being worked at this moment; others are to be begun to-morrow, next week, next month; others are unbought, unthought of; and marble enough for more ages than have passed since the place was resorted to, lies hidden everywhere: patiently awaiting its time of discovery.

As you toil and clamber up one of these steep gorges (having left your pony soddening his girths in water, a mile or two lower down) you hear, every now and then, echoing among the hills, in a low tone, more silent than the previous silence, a melancholy warning bugle,—a signal to the miners to withdraw. Then, there is a thundering, and echoing from hill to hill, and perhaps a splashing up of great fragments of rock into the air; and on you toil again until some other bugle sounds, in a new direction, and you stop directly, lest you should come within the range of the new explosion.

There were numbers of men, working high up in these hills—on the sides—clearing away, and sending down the broken masses of stone and earth, to make way for the blocks of marble that had been discovered. As these came rolling down from unseen hands into the narrow valley, I could not help thinking of the deep glen (just the same sort of glen) where the Roc left Sindbad the Sailor; and where the merchants from the heights above, flung down great pieces of meat for the diamonds to stick to. There were no eagles here, to darken the sun in their swoop, and pounce upon them; but it was as wild and fierce as if there had been hundreds.

But the road, the road down which the marble comes, however immense the blocks! The genius of the country, and the spirit of its institutions, pave that road: repair it, watch it, keep it going! Conceive a channel of water running over a rocky bed, beset with great heaps of stone of all shapes and sizes, winding down the middle of this valley; and THAT being the road—because it was the road five hundred years ago! Imagine the clumsy carts of five hundred years ago, being used to this hour, and drawn, as they used to be, five hundred years ago, by oxen, whose ancestors were worn to death five hundred years ago, as their unhappy descendants are now, in twelve months, by the suffering and agony of this cruel work! Two pair, four pair, ten pair, twenty pair, to one block, according to its size; down it must come, this way. In their struggling from stone to stone, with their enormous loads behind them, they die frequently upon the spot; and not they alone; for their passionate drivers, sometimes tumbling down in their energy, are crushed to death beneath the wheels. But it was good five hundred years ago, and it must be good now: and a railroad down one of these steeps (the easiest thing in the world) would be flat blasphemy.

When we stood aside, to see one of these cars drawn by only a pair of oxen (for it had but one small block of marble on it), coming down, I hailed, in my heart, the man who sat upon the heavy yoke, to keep it on the neck of the poor beasts—and who faced backwards: not before him—as the very Devil of true despotism. He had a great rod in his hand, with an iron point; and when they could plough and force their way through the loose bed of the torrent no longer, and came to a stop, he poked it into their bodies, beat it on their heads, screwed it round and round in their nostrils, got them on a yard or two, in the madness of intense pain; repeated all these persuasions, with increased intensity of purpose, when they stopped again; got them on, once more; forced and goaded them to an abrupter point of the descent; and when their writhing and smarting, and the weight behind them, bore them plunging down the precipice in a cloud of scattered water, whirled his rod above his head, and gave a great whoop and hallo, as if he had achieved something, and had no idea that they might shake him off, and blindly mash his brains upon the road, in the noontide of his triumph.

Standing in one of the many studii of Carrara, that afternoon—for it is a great workshop, full of beautifully-finished copies in marble, of almost every figure, group, and bust, we know—it seemed, at first, so strange to me that those exquisite shapes, replete with grace, and thought, and delicate repose, should grow out of all this toil, and sweat, and torture! But I soon found a parallel to it, and an explanation of it, in every virtue that springs up in miserable ground, and every good thing that has its birth in sorrow and distress. And, looking out of the sculptor’s great window, upon the marble mountains, all red and glowing in the decline of day, but stern and solemn to the last, I thought, my God! how many quarries of human hearts and souls, capable of far more beautiful results, are left shut up and mouldering away: while pleasure-travellers through life, avert their faces, as they pass, and shudder at the gloom and ruggedness that conceal them!"

Site of the Comune of Carrara:
http://www.comune.carrara.ms.it