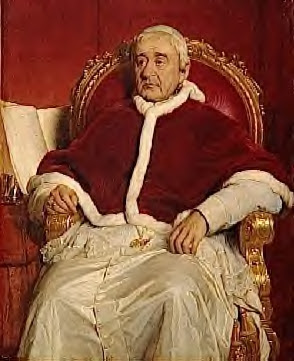 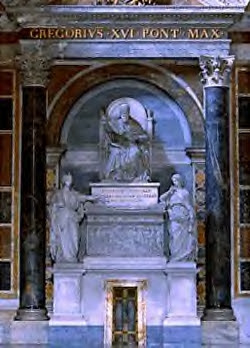 Monument to Gregory XVI by Luigi Amici, 1848-57
The bas-relief on the urn portrays the Institution of the Missions by the Pontiff.
The two allegorical lateral figures represent Wisdom (head crowned by a flame) and Prudence (with a mirror and a snake). On the base there is a door leading to the Chapel of the Blessed Sacrament.

When in Rome, Dickens attended a Papal High Mass. The Pope was Gregory XVI.

He was the last pope to be elected who was not already consecrated a bishop. He was an abbot.

Gregory was a conservative both in politics and theology, and he was continually opposed by liberals throughout Europe.

His most famous act was the condemnation of Father Lamennais with the encyclical Mirari vos (1832).

In 1831, the Carbonari outbreaks spread to Rome, and only Austrian help suppressed them. He nearly came to an open break over anticlerical legislation in Spain and Portugal, and he had a long controversy with Prussia. Gregory was actively interested in propagating the faith in England and the United States.

He was succeeded by Pius IX.

In reading the passage, it might be helpful to know that Gregory XVI was not popular in contemporary English circles. That might explain the rather barbed tone and comments in what Dickens wrote.

In 1844, near the end of his reign, he issued the Encyclical, Inter praecipuas machinationes, against the anti-Catholic propaganda in Italy of the London Bible Society and the New York Christian Alliance.

London was also refuge to Italian political refugees who fled the rule of Gregory XVI`s conservative Secretary of State. There much sympathy in the capital towards these refugees.

For biographies of Gregory XVI and his reign, see:


For an essay on Italian refugees in London, see Panizzi, Gladstone, Garibaldi and the Neapolitan Prisoners at
http://www.bl.uk/collections/eblj/2005/pdfarticles/article6.pdf

Dickens describes the Papal Mass in Chapter 10 of Pictures from Italy:

"On Sunday, the Pope assisted in the performance of High Mass at St. Peter’s. The effect of the Cathedral on my mind, on that second visit, was exactly what it was at first, and what it remains after many visits. It is not religiously impressive or affecting. It is an immense edifice, with no one point for the mind to rest upon; and it tires itself with wandering round and round. The very purpose of the place, is not expressed in anything you see there, unless you examine its details—and all examination of details is incompatible with the place itself. It might be a Pantheon, or a Senate House, or a great architectural trophy, having no other object than an architectural triumph. There is a black statue of St. Peter, to be sure, under a red canopy; which is larger than life and which is constantly having its great toe kissed by good Catholics. You cannot help seeing that: it is so very prominent and popular. But it does not heighten the effect of the temple, as a work of art; and it is not expressive—to me at least—of its high purpose.

A large space behind the altar, was fitted up with boxes, shaped like those at the Italian Opera in England, but in their decoration much more gaudy. In the centre of the kind of theatre thus railed off, was a canopied dais with the Pope’s chair upon it. The pavement was covered with a carpet of the brightest green; and what with this green, and the intolerable reds and crimsons, and gold borders of the hangings, the whole concern looked like a stupendous Bonbon. On either side of the altar, was a large box for lady strangers. These were filled with ladies in black dresses and black veils. The gentlemen of the Pope’s guard, in red coats, leather breeches, and jack-boots, guarded all this reserved space, with drawn swords that were very flashy in every sense; and from the altar all down the nave, a broad lane was kept clear by the Pope’s Swiss guard, who wear a quaint striped surcoat, and striped tight legs, and carry halberds like those which are usually shouldered by those theatrical supernumeraries, who never CAN get off the stage fast enough, and who may be generally observed to linger in the enemy’s camp after the open country, held by the opposite forces, has been split up the middle by a convulsion of Nature.

I got upon the border of the green carpet, in company with a great many other gentlemen, attired in black (no other passport is necessary), and stood there at my ease, during the performance of Mass. The singers were in a crib of wirework (like a large meat-safe or bird-cage) in one corner; and sang most atrociously. All about the green carpet, there was a slowly moving crowd of people: talking to each other: staring at the Pope through eye-glasses; defrauding one another, in moments of partial curiosity, out of precarious seats on the bases of pillars: and grinning hideously at the ladies. Dotted here and there, were little knots of friars (Frances-cani, or Cappuccini, in their coarse brown dresses and peaked hoods) making a strange contrast to the gaudy ecclesiastics of higher degree, and having their humility gratified to the utmost, by being shouldered about, and elbowed right and left, on all sides. Some of these had muddy sandals and umbrellas, and stained garments: having trudged in from the country. The faces of the greater part were as coarse and heavy as their dress; their dogged, stupid, monotonous stare at all the glory and splendour, having something in it, half miserable, and half ridiculous.

Upon the green carpet itself, and gathered round the altar, was a perfect army of cardinals and priests, in red, gold, purple, violet, white, and fine linen. Stragglers from these, went to and fro among the crowd, conversing two and two, or giving and receiving introductions, and exchanging salutations; other functionaries in black gowns, and other functionaries in court-dresses, were similarly engaged. In the midst of all these, and stealthy Jesuits creeping in and out, and the extreme restlessness of the Youth of England, who were perpetually wandering about, some few steady persons in black cassocks, who had knelt down with their faces to the wall, and were poring over their missals, became, unintentionally, a sort of humane man-traps, and with their own devout legs, tripped up other people’s by the dozen.

There was a great pile of candles lying down on the floor near me, which a very old man in a rusty black gown with an open-work tippet, like a summer ornament for a fireplace in tissue-paper, made himself very busy in dispensing to all the ecclesiastics: one a-piece. They loitered about with these for some time, under their arms like walking-sticks, or in their hands like truncheons. At a certain period of the ceremony, however, each carried his candle up to the Pope, laid it across his two knees to be blessed, took it back again, and filed off. This was done in a very attenuated procession, as you may suppose, and occupied a long time. Not because it takes long to bless a candle through and through, but because there were so many candles to be blessed. At last they were all blessed: and then they were all lighted; and then the Pope was taken up, chair and all, and carried round the church.

I must say, that I never saw anything, out of November, so like the popular English commemoration of the fifth of that month. A bundle of matches and a lantern, would have made it perfect. Nor did the Pope, himself, at all mar the resemblance, though he has a pleasant and venerable face; for, as this part of the ceremony makes him giddy and sick, he shuts his eyes when it is performed: and having his eyes shut and a great mitre on his head, and his head itself wagging to and fro as they shook him in carrying, he looked as if his mask were going to tumble off. The two immense fans which are always borne, one on either side of him, accompanied him, of course, on this occasion. As they carried him along, he blessed the people with the mystic sign; and as he passed them, they kneeled down. When he had made the round of the church, he was brought back again, and if I am not mistaken, this performance was repeated, in the whole, three times. There was, certainly nothing solemn or effective in it; and certainly very much that was droll and tawdry. But this remark applies to the whole ceremony, except the raising of the Host, when every man in the guard dropped on one knee instantly, and dashed his naked sword on the ground; which had a fine effect.

The next time I saw the cathedral, was some two or three weeks afterwards, when I climbed up into the ball; and then, the hangings being taken down, and the carpet taken up, but all the framework left, the remnants of these decorations looked like an exploded cracker."
Posted by Unknown at 4:31 pm