In the 1840s, Dickens wrote regarding the death customs he observed whilst staying in Genova:

"It may be a consequence of the frequent direction of the popular mind, and pocket, to the souls in Purgatory, but there is very little tenderness for the BODIES of the dead here. For the very poor, there are, immediately outside one angle of the walls, and behind a jutting point of the fortification, near the sea, certain common pits—one for every day in the year—which all remain closed up, until the turn of each comes for its daily reception of dead bodies. Among the troops in the town, there are usually some Swiss: more or less. When any of these die, they are buried out of a fund maintained by such of their countrymen as are resident in Genoa. Their providing coffins for these men is matter of great astonishment to the authorities.

Certainly, the effect of this promiscuous and indecent splashing down of dead people in so many wells, is bad. It surrounds Death with revolting associations, that insensibly become connected with those whom Death is approaching. Indifference and avoidance are the natural result; and all the softening influences of the great sorrow are harshly disturbed.

There is a ceremony when an old Cavaliere or the like, expires, of erecting a pile of benches in the cathedral, to represent his bier; covering them over with a pall of black velvet; putting his hat and sword on the top; making a little square of seats about the whole; and sending out formal invitations to his friends and acquaintances to come and sit there, and hear Mass: which is performed at the principal Altar, decorated with an infinity of candles for that purpose.

When the better kind of people die, or are at the point of death, their nearest relations generally walk off: retiring into the country for a little change, and leaving the body to be disposed of, without any superintendence from them. The procession is usually formed, and the coffin borne, and the funeral conducted, by a body of persons called a Confraternita, who, as a kind of voluntary penance, undertake to perform these offices, in regular rotation, for the dead; but who, mingling something of pride with their humility, are dressed in a loose garment covering their whole person, and wear a hood concealing the face; with breathing-holes and apertures for the eyes. The effect of this costume is very ghastly: especially in the case of a certain Blue Confraternita belonging to Genoa, who, to say the least of them, are very ugly customers, and who look—suddenly encountered in their pious ministration in the streets—as if they were Ghoules or Demons, bearing off the body for themselves.

Although such a custom may be liable to the abuse attendant on many Italian customs, of being recognised as a means of establishing a current account with Heaven, on which to draw, too easily, for future bad actions, or as an expiation for past misdeeds, it must be admitted to be a good one, and a practical one, and one involving unquestionably good works. A voluntary service like this, is surely better than the imposed penance (not at all an infrequent one) of giving so many licks to such and such a stone in the pavement of the cathedral; or than a vow to the Madonna to wear nothing but blue for a year or two. This is supposed to give great delight above; blue being (as is well known) the Madonna’s favourite colour. Women who have devoted themselves to this act of Faith, are very commonly seen walking in the streets."


But about the same time that Dickens was writing, a change was taking place in Genova to revolutionise the past practices: the building of the cemetery at Staglieno.

In 1835, the architect Carlo Barabino had advocated the project. But he died that year.

In 1844 work finally began on the project and Staglieno opened for business in 1851.

The Cemetery at Staglieno, Genova

Extending to 18000 square metres, it became a veritable Necropolis, City of the Dead.

In 1869, Mark Twain in Innocents Abroad wrote of Genova:

"Our last sight was the cemetery (a burial place intended to accommodate 60,000 bodies,) and we shall continue to remember it after we shall have forgotten the palaces. It is a vast marble collonaded corridor extending around a great unoccupied square of ground; its broad floor is marble, and on every slab is an inscription--for every slab covers a corpse. On either side, as one walks down the middle of the passage, are monuments, tombs, and sculptured figures that are exquisitely wrought and are full of grace and beauty. They are new and snowy; every outline is perfect,
every feature guiltless of mutilation, flaw, or blemish; and therefore, to us these far-reaching ranks of bewitching forms are a hundred fold more lovely than the damaged and dingy statuary they have saved from the wreck of ancient art and set up in the galleries of Paris for the worship of the world."

Frock-coated, moustachioed merchants and their grieving widows are depicted with immaculate realism in white marble, sometimes sitting in chairs, sometimes lying on beds, perhaps attended by figures of Death. There is no coyness here about the subject or purpose, no reticence or reliance on cliched euphemism; these very expensive sculptures--often integrated in architectural designs of considerable originality (especially at the beginning of the twentieth century)--attest not so much to the piety of the dead as to the wealth and importance of the living.

With perhaps some irony and exaggeration, in 1960, Evelyn Waugh wrote that it is as a 'museum of mid-nineteenth-century bourgeois art in the full, true sense ... that the Campo Santo of Genoa stands supreme. If Pere Lachaise and the Albert Memorial were obliterated, the loss would be negligible as long as this great repository survives.' 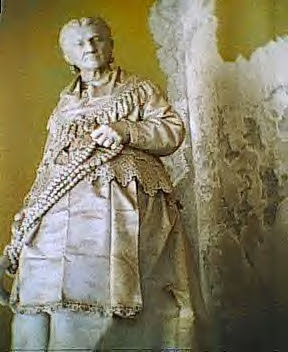 Statue of Caterina Campodonica at Staglieno

Why the change ? Some have said that it was a gross illusion whereby people persuaded themselves that they might defeat the oblivion of death and achieve a form of immortality. That may account for some of it: such as the statue of Caterina Campodonica, an impoverished hawker of nuts and bread at fairs and feasts. Out of her meagre income, she managed to save enough money to commission the best of sculptors to set her humble self among Genoa's elite. Despite the precision with which the artists captured their patrons' likenesses, most patrons have, by now, mostly been forgotten.

But was there more than that ? Some have speculated that the cemetery is a place of infinite optimism where life everlasting takes precedence over death, loss and mortality. The focus is turned from the temporal past to: salvation, rebirth and everlasting life. There is a duality of tribute and hope. 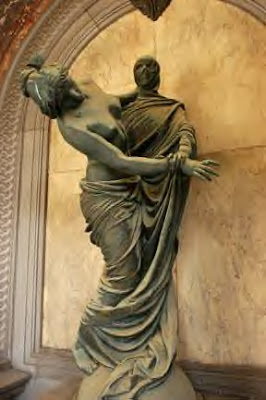 For the Romantics, death was an important theme. For them death was experienced as exquisite emotion and the ultimate expression of love. "To die loving you is better than life itself," wrote Alferd de Musset. The Romantic era was a period of "beautiful death" in which death was perceived as a refuge, a release, a reward and a rebirth.

Whatever the reasons, things have now come full circle as The Corriere della Sera recently reported. To such an extent that the Archbishop of Genova, Angelo Bagnasco preached on the subject recently.

Elderly people on their own, or relatives who refuse to foot the funeral bill. A new burial policy.

GENOA — The professionals call them “interest-free corpses”, as the law likes to catalogue them.

They are the dear departed that no one wants, the deceased who go unburied until local authorities intervene to give them a quick funeral at tax-payers’ expense.

In the San Martino Hospital morgue, which serves the whole city of Genoa, the number of “interest-free” dead has reached 30%. “Just under a third,” confirms Luciano Dolcetti, managing director of the municipal funeral service. These people die at home, and are usually very elderly; or they are accident victims who are taken directly to the hospital morgue. Some have died in hospital and even after the statutory 36 hours in the mortuary, no one has come forward to “claim” them, and thus they become “interest-free” corpses. Bereft of any interest for their relatives, that is; relatives who don’t exist, or can’t be found, or if they can be located they certainly have no intention of paying funeral expenses.

“Family members sometimes check things out at the bank first,” explains Mr Dolcetti, “and if they aren’t satisfied they pull out.” And, of course, there are people who simply could not afford the cost of a funeral. And in the end the City has to step in. “It’s very sad,” remarks Mr Docletti, “because quite often the deceased are people who have probably had quite rich social lives and had jobs that made them well-known and loved by many, but they end up on their own.”

In order to provide a solution, at least in part, to the situation, the municipal funeral service has created a kind of “burial policy”. As Mr Dolcetti explains, “More and more old people come to us worried that they will go without a funeral, so we offer them this policy to cover the cost of the service. Some of them are very, very precise and even tell us which flowers they want, what music, right down to the last details.”

The affair of the dead that no one wants to bury came to the surface in Genoa with the case of Antonio Buti, 68, a highly-respected former literature teacher at a technical school. When his neighbours noticed that they hadn’t seen Mr Buti for some days they started to worry and discovered that the gentle teacher had been hospitalized at San Martino, had died there and become one of the “interest-free corpses”.

The neighbours launched an appeal on the regional news hoping to track down relatives and in the end they raised money in a collection to pay for a religious service. But the lonely death of Mr Buti revealed just to what extent things had changed in Genoa, a city that has always been known for its strong attachment to the dear departed. It is no coincidence if the city has one of the most extensive and important monumental cemeteries in Europe, Staglieno, as well as thirty-five other cemeteries.

But fewer and fewer visitors are going to the graveyards these days. “Habits are changing,” says Roberto Burchielli, director of the City’s cemetery services department. “We have calculated that there has been a 45% drop in visitors in the last five years.”

And which group is most reluctant to visit their dear departed? The forty-somethings, according to Mr Burchielli.

So, while the city is wondering if it has lost its sense of pietas, Archbishop Angelo Bagnasco was moved to speak, during the November 2 All Souls memorial service in the cathedral, about the people who die alone and are left abandoned in the city morgue. “This is something which hurts us and touches us profoundly,” said the bishop in his homily. “We need to work towards the creation of social networks that unit people. It may be true that there are no more relatives, but there are still other people.”

For a saint buried there but subsequently translated:
St Francis Mary Camporosso
http://www.franciscanfriars.com/religious%20brothers/cfrreligousbrother/Francis%20of%20Camporosso.htm
http://www.beafriar.com/fmc.html
Posted by Unknown at 1:51 pm