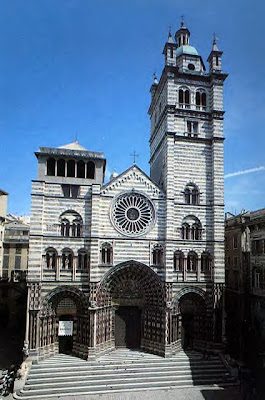 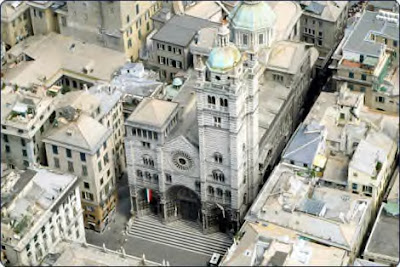 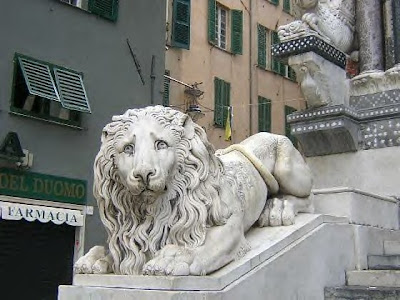 One of the friendly lions outside the Cathedral

When the Cathedral had two full towers 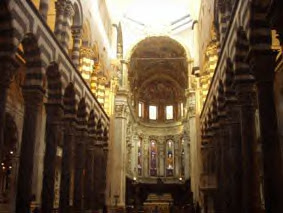 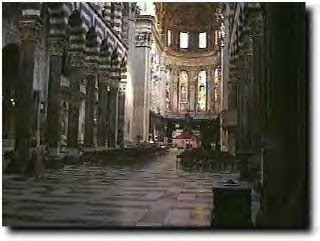 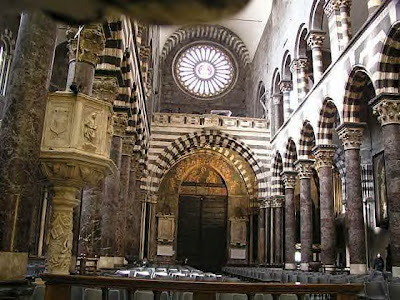 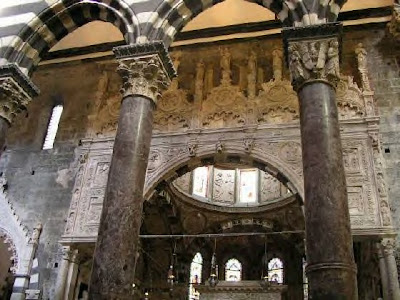 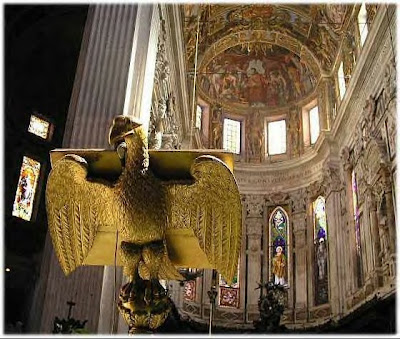 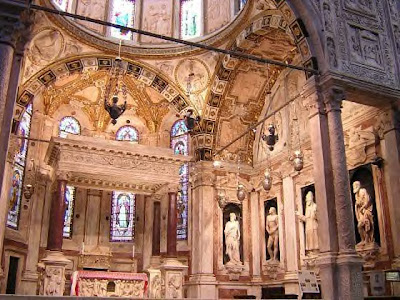 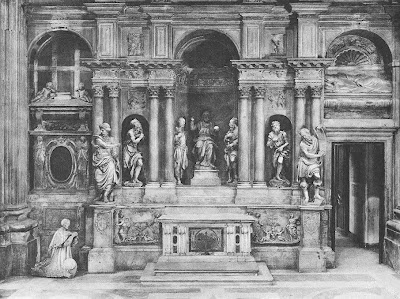 PORTA, Guglielmo della (b. ca. 1490, Genova, d. 1577, Roma)
Altar1534-37 Marble Chapel of Peter and Paul
North Italian sculptor, who worked first in Genoa and then (from 1537) in Rome, where he succeeded Sebastiano del Piombo at the Papal Mint (1547). He had a prolific and varied career, his work including several papal busts and tombs in various Roman churches, the most important being that of Paul III in St Peter's (1549-75). He also produced numerous small devotional and pagan statuettes and was known as a restorer and copier of antique works (both activities typical of his age). The major influence on his style was Michelangelo and he had a penchant for reclining figures in the manner of the master's Day and Night, Dawn and Evening in the Medici Chapel, Florence. 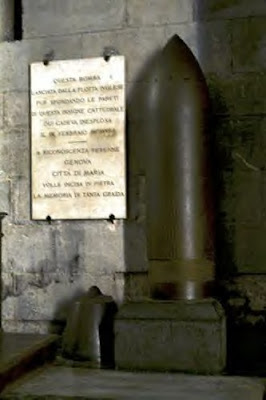 The Bomb that did not explode

This church, dedicated to S. Lorenzo (St Lawrence the martyr) became the city's cathedral in the 10th century after it was deemed to be safer than the more primitive S. Siro cathedral, as it was situated inside the fortified walls built in 864

Excavations inside the Cathedral have unearthed walls and pavements dating back to Roman times. beneath the sacristy preChristian sarcophagi support the theory that there was a pagan cemetery originally.

A church was in existence on the site from the fifth and sixth centuries.

The three black and white striped marble portals on the front of San Lorenzo are sculpted with stories of the Virgin Mary and are similar to those on the Cathedrals in Chartres and Rouen. They can be traced back to 13th century Franco Norman craftsmanship, providing the most interesting example of the French gothic style in Italy.

The construction of the cathedral, which can be said to have lasted for centuries thanks to artists from Pisa, Lombardy and France, gave rise to an interesting mixture of styles, especially visible in the black and white facade.

The statue of a saint with a sundial called the Arrotino is French gothic, the column-bearing lions are nineteenth century, the rose window is 15th century, the two towers, one of which is unfinished are 15th and 16th century.

The inside is made up of three naves flanked by columns and reclaimed roman capitals, and owes its current appearance to the refurbishment carried out after the fire in 1296.

During the refurbishment props were used to rebuild the lower part using pointed gothic arches, maintaining the overhead round Roman arches. In general, however, the church is mostly characterised by the bare medieval style enhanced by the lack of wall decoration, except for the important fresco in the lunette on the internal front wall (The Last Judgement, fourteenth century).

The largest of the side altars is dedicated to S. John the Baptist, patron of the city, whose relics are thought to have been brought to Genoa after the crusades and now sit in a valuable 14th century urn made by Norman craftsmen. The chapel was carried out by Lombard sculptors Domenico and Elia Gagini, who designed and executed it with a complex series of reliefs.

The fifteenth century sculptor G. Gaggini was very involved in the adorning of the chapel with several statues of Sansovino. The Lercari chapel at the end of the left-hand nave dates back to the 16th century. The frescoes were done by L. Cambiaso and G.B. Castello il Bergamasco. The sober dome by G. Alessi and the presbytery are also from the same period.

In 1923, the Cathedral was the centre of the celebrations of the International Congress of the Eucharist of that year.

A bomb sits at the beginning of the right hand nave. On 9th February 1941 it hit the cathedral destroying part of the casing, but remaining miraculously unexploded.

Inside the Cathedral, are buried various archbishops of Genova, including Cardinal Joseph Siri.
Posted by Unknown at 5:53 pm