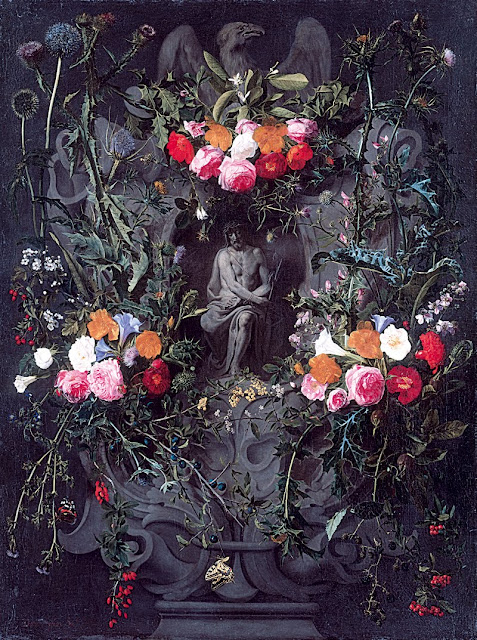 A pupil of Jan Breughel the Elder, Seghers became a lay brother of the Jesuit order and took his vows in Brussels in 1625.

He specialised in painting garlands of flowers to frame religious scenes.

He collaborated with Antwerp’s most prominent painters including Rubens, Cornelius Schut and Erasmus Quellinus (1607-1678).

Flower painting was to the Dutch and Flemish as the sonnet is to the English. It has been said that second only to Scripture and the didactic poetry of Jacob Cats, flower painting became a kind of illustrated guide to popular morality in the Low Countries during the 17th and 18th centuries. It has aso been argued that it filled the gap in religious art left by the iconoclasm of the post-Reformation period.

In this painting there is an unusual number of thorns and prickles among the flowers. The reason for this is that the grisaille figure in the centre represents Christ our Lord wearing the Crown of Thorns. The thorns and holly (both symbols of the Crown of Thorns and Christ´s Passion) reinforce the meaning of the central image.

The theme is "Ecce Homo". There is a painting by Seghers with a similar theme in the Vatican Museums.

Significantly in the group of blossoms there is a passion flower, so named because the number of petals correspond to the number of apostles.