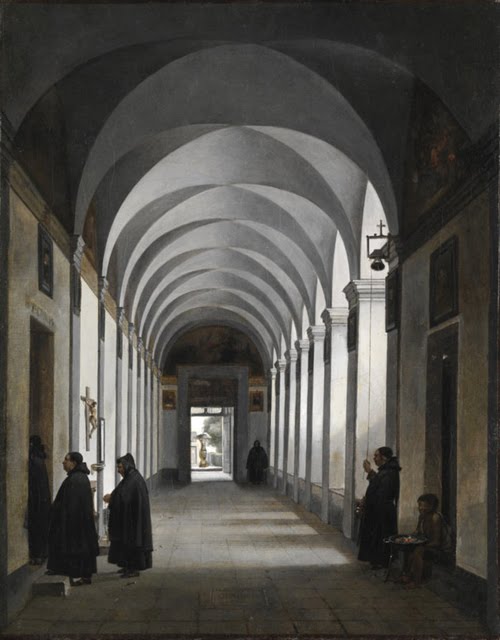 Monks in the Cloister of the Church of Gesù e Maria, Rome 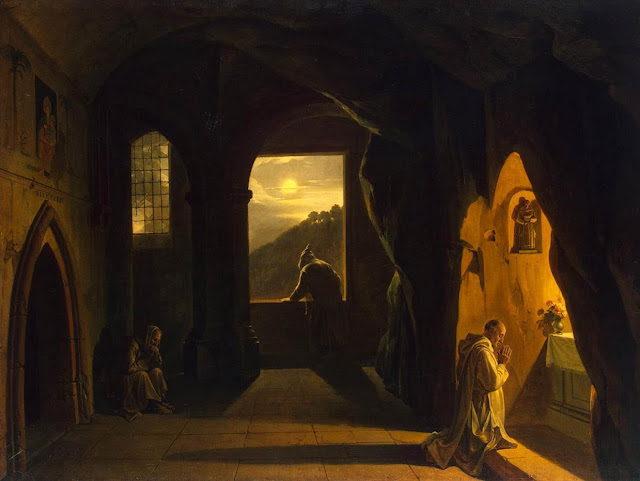 Monks in a Cave 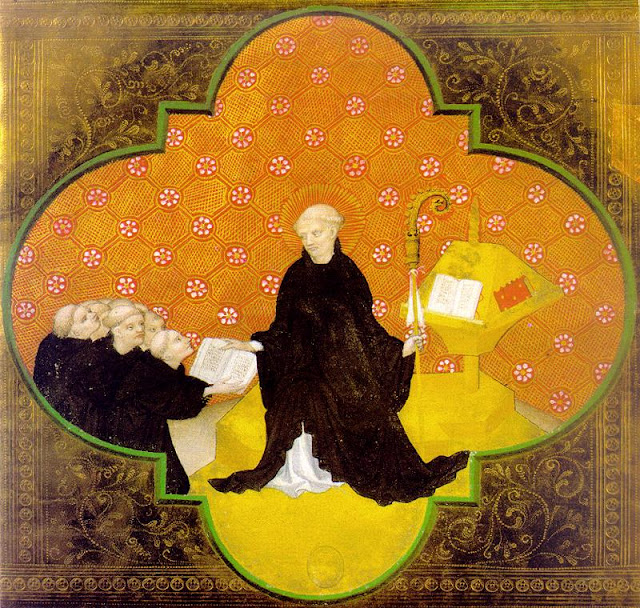 The workshop of The Master of the Martyrologium of Gerona

"In 12th-century monasteries the theological method mainly entailed the explanation of Sacred Scripture, the sacra pagina to borrow the words of the authors of that period; biblical theology in particular was practised. The monks, in other words, were devout listeners to and readers of the Sacred Scriptures and one of their chief occupations consisted in lectio divina, that is, the prayed reading of the Bible. For them the mere reading of the Sacred Text did not suffice to perceive its profound meaning, its inner unity and transcendent message. It was therefore necessary to practise a biblical theology, in docility to the Holy Spirit. Thus, at the school of the Fathers, the Bible was interpreted allegorically in order to discover on every page of both the Old and New Testaments what it says about Christ and his work of salvation.

Last year, the Synod of Bishops on the "Word of God in the life and mission of the Church" reminded us of the importance of the spiritual approach to the Sacred Scriptures. It is useful for this purpose to take into account monastic theology, an uninterrupted biblical exegesis, as well as the works written by its exponents, precious ascetic commentaries on the Books of the Bible. Thus monastic theology incorporated the spiritual aspect into literary formation. It was aware, in other words that a purely theoretical and unversed interpretation is not enough: to enter into the heart of Sacred Scripture it must be read in the spirit in which it was written and created. Literary knowledge was necessary in order to understand the exact meaning of the words and to grasp the meaning of the text, refining the grammatical and philological sensibility. Thus Jean Leclercq, a Benedictine scholar in the past century, entitled the essay in which he presents the characteristics of monastic theology: L'amour des lettres et le désir de Dieu (Love of words and the desire for God).

In fact, the desire to know and to love God which comes to meet us through his words to be received, meditated upon and put into practice, leads us to seek to deepen our knowledge of the biblical texts in all their dimensions.

Then there is another attitude on which those who practise monastic theology insist: namely an intimate, prayerful disposition that must precede, accompany and complete the study of Sacred Scripture. Since, ultimately, monastic theology is listening to God's word, it is impossible not to purify the heart in order to receive it and, especially, it is impossible not to enkindle in it a longing to encounter the Lord.

Theology thus becomes meditation, prayer, a song of praise and impels us to sincere conversion. On this path, many exponents of monastic theology attained the highest goals of mystic experience and extend an invitation to us too to nourish our lives with the word of God, for example, through listening more attentively to the Readings and the Gospel, especially during Sunday Mass. It is also important to set aside a certain period each day for meditation on the Bible, so that the word of God may be a light that illumines our daily pilgrimage on earth. " 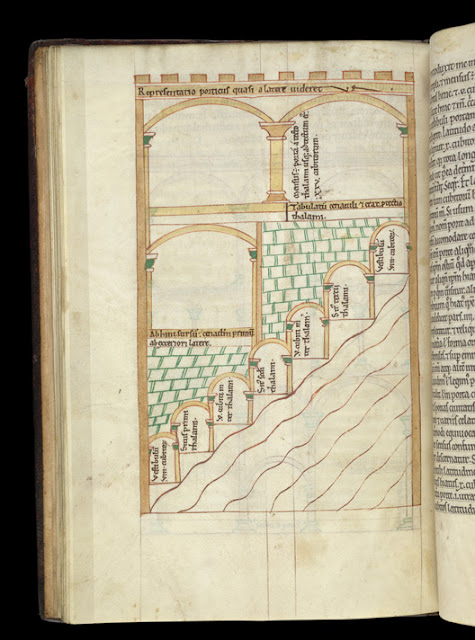 The Porticus, In Richard of St.-Victor on Ezekiel 1195 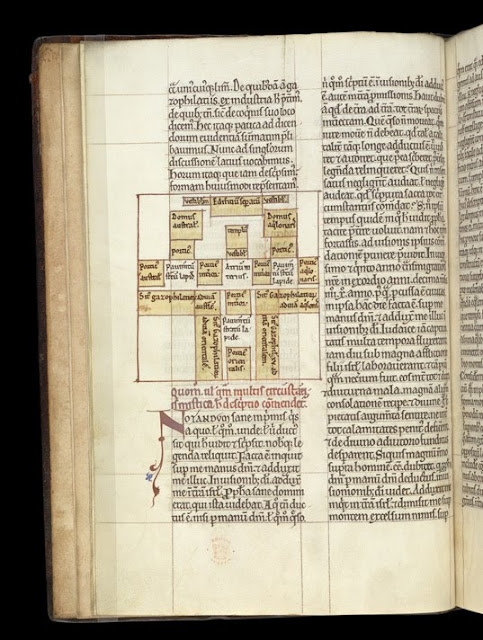 The Inner Atrium, In Richard of St.-Victor on Ezekiel 1195

"Richard of St Victor, a native of Scotland, had a successful career as a monk at the monastery of St Victor in Paris until he died in 1173. Following the teachings of Hugo of St Victor, his master, he wrote about the Bible to help monks contemplate its mysteries. In this book, although writing about an Old Testament vision of a temple on a mountain (Ezekiel 40-48), he tried to understand it in a way that broke with earlier traditions, which understood the vision symbolically. Richard saw the complex biblical passage as a literal description of the physical Temple in Jerusalem. Illustrations were a part of his book, meant as aids for the difficult bits on measurements and design of the building. Either Richard himself or a draughtsman created the illustrations, making use of their knowledge of all types of grand buildings--civic and military--that they saw in 12th-century Paris. Demand for the book quickly grew. This copy was made in Gloucestershire for the monastery at Lanthony (or Llanthony) not long after Richard's death. It was originally part of a larger volume containing sermons and material on church services. This illustration shows the porticus described in Ezekiel 41:5-8 from the side. Richard is intent on a truly concrete understanding of the design of the temple" (British Library Commentary) 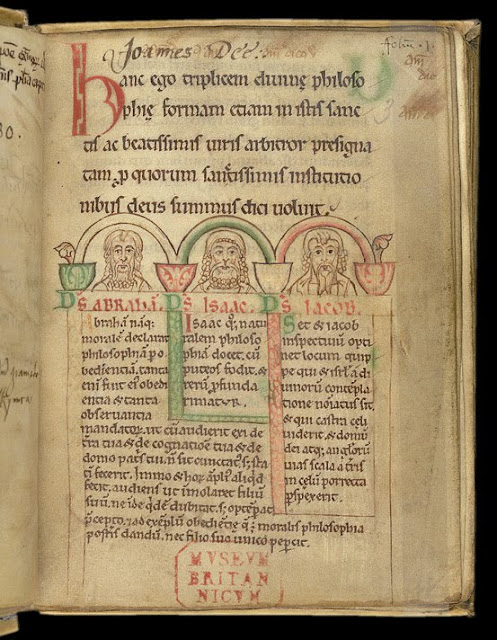 A Diagram in the 'Philosophy of Solomon', in a Miscellany 1170

"This mid to late 12th century manuscript belonged to St Augustine's Abbey, Canterbury. It contains an assortment of writings which might have been of interest to a theological writer working in an important monastery such as St Augustine's. Detailed expositions on grammar and the meanings of obscure words found in scripture, recipes for gold and colours for illuminating, a homily for Palm Sunday and a letter of spiritual counsel to a monk are included. It probably would have been used as a reference for writing theological commentaries and sermons and in producing materials for paintings in manuscripts.

A treatise on the 'Philosophy of Solomon' appears to be notes taken from several sources comparing the patriarchs Abraham, Isaac and Jacob with the three branches of philosophy (moral, natural and inspective or theoretical) and the three books of Solomon. A reader-friendly diagram lays out the three categories, arranged in arched columns, each with a portrait head of the appropriate patriarch over it. In the upper margin, Elizabeth I's astrologer, John Dee--who once owned the manuscript--inscribed his name." (British Library Commentary) 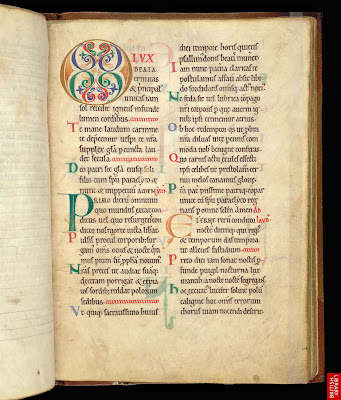 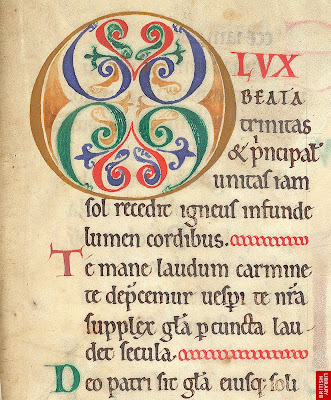 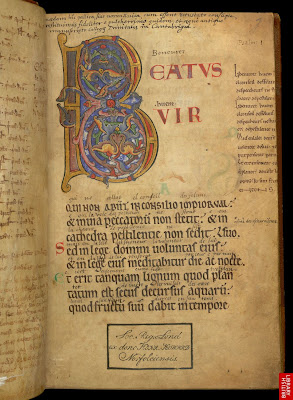 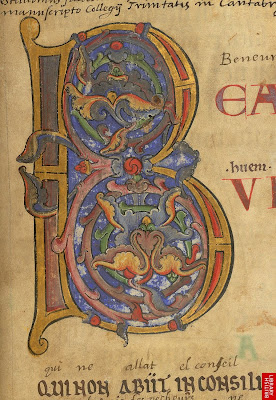 2nd half of the 12th century 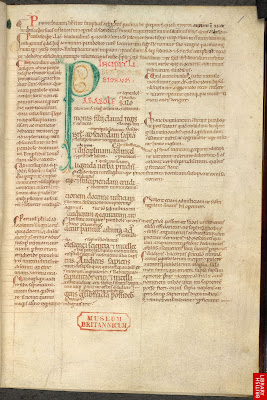 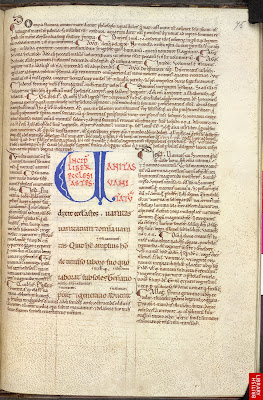 "During the twelfth century the number of monasteries and abbeys grew, all needing manuscripts for their libraries. From around 1200, alternative centres of learning appeared in the shape of the first universities. Production of manuscripts began to shift from monastic scriptoria to professional workshops in the new university towns. Their subject matter became broader and more secular.

As literacy increased from the thirteenth century onwards, manuscripts provided visual and literary entertainment for the wealthy elite. Books such as Chrétien de Troyes’ stories of King Arthur and his knights gave old tales a new chivalric twist and reflected the cosmopolitan culture of aristocratic life. The fateful meeting of Sir Lancelot and Queen Guinevere at the feast is among the 14th-century paintings added, in Bohemian style, to an earlier English manuscript written in the Norman French spoken at the royal court.

The number of people able to afford and read books increased apace during the 14th and 15th centuries. Clergy, landowners and merchants all aspired to own a Book of Hours - a series of daily prayers and devotions. These were the most common of medieval manuscripts. Some were ’mass produced’ and sold ready-made or bought second-hand. Others were specially commissioned, every detail of quality and decoration designed to fit each patron’s purse. Books had become as much status symbols as spiritual aids. The Hours made for Thomas Butler, 7th earl of Ormonde and great grandfather of Anne of Boleyn, is just one of many including the family coats of arms amid its religious imagery."

(Curator's introduction to Illuminated Manuscripts in The British Library website)