The Resurrection of Christ 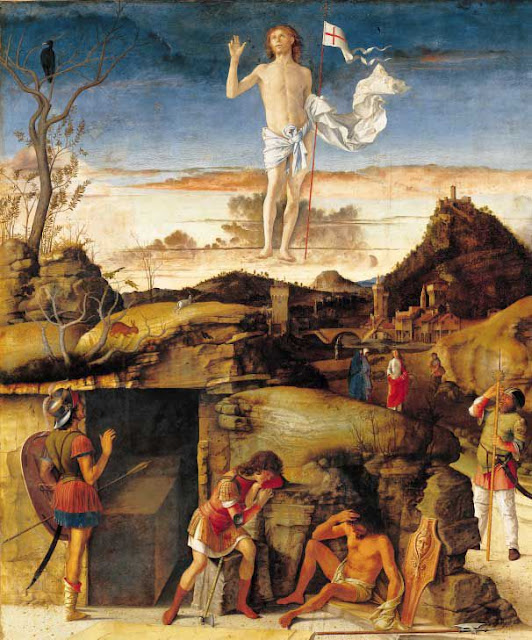 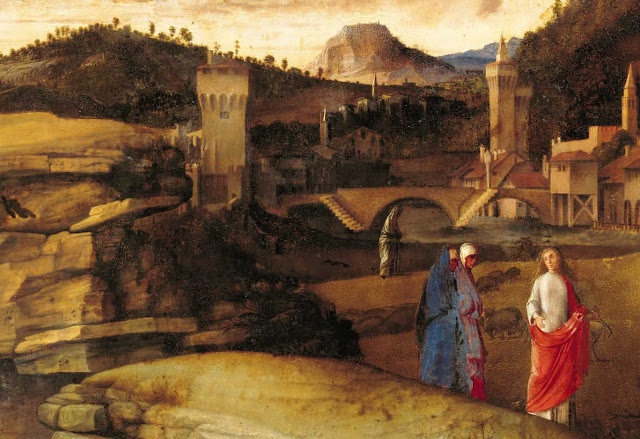 This work was made for the altar commissioned by Marin Zorzi for his family chapel in the church of San Michele in Isola, on the island between Venice and Murano.

The luminous apparition of Christ, suspended in the cool, clear air of a spring morning ,awakens only motionless, hushed astonishment in the two soldiers standing guard, while their companions continue to sleep, even though the stone falling away from the tomb has nearly struck one of them.

The fact that one of the sleeping soldiers is almost naked might seem incongruent, but this nakedness may be an allusion to the pagan world of which Christ `s resurrection declares the end.

Of the pious women in the distance only the Magdalene is aware of the event taking place, and the season, early spring, is indicated most of all by the wild rabbits scampering over the hillside, although there are also the trees, still bare, on one of which perches a heraldic raptor, which has been identified as a vulture, symbolic of the death that is defeated by Christ .

"The Spirit cannot be correctly understood without Christ, but it is equally impossible to understand Christ without the Holy Spirit. "The Lord is the Spirit" Paul tells us in 2 Cor 3:17 (RSV).

This does not mean that the two are simply the same thing or person. But it does mean that Christ can be among us and for us as the Lord only because the Incarnation was not his last word.

The Incarnation reaches its apex in the death on the cross and in the resurrection.

This means that Christ can come only because he has gone before us into the order of life of the Holy Spirit and communicates himself through and in that Spirit....

The Incarnation does not stop with the historical Jesus ... The "historical Jesus" has eternal significance precisely because his flesh is transformed in the resurrection, so that he can make himself present to all places and all times in the power of the Holy Spirit, as the farewell discourses in John wonderfully show (cf. especially Jn 14:28: "I go and I come to you": RSV)."