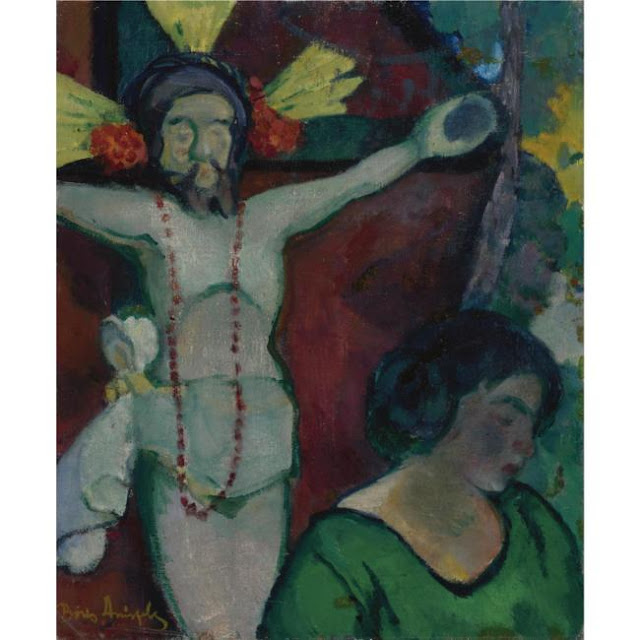 
Anisfeld paints the image as serene, even meditative.

At the time some found the depictions to be hideous, uninteligibe and even blasphemous.

""The title of the painting to which you make reference is not 'The Crucifixion,' but 'A Wayside Crucifix, Tyrol.' The scene is not, as you infer, an individual conception of the artist. It was, to the contrary, painted direct from nature, the original having been erected alongside a mountain pathway, and there worshipped by generations of pious peasant Catholics, than whom there is no class more reverent or more devout. The subject is, moreover, identical with a number of such themes which have proved inspiring to no less a master than John S. Sargent....For no matter what your, or my, individual preferences and prejudices may be, art in America should, and must, be wholly and absolutely free, or suffer a craven and stultifying eclipse." 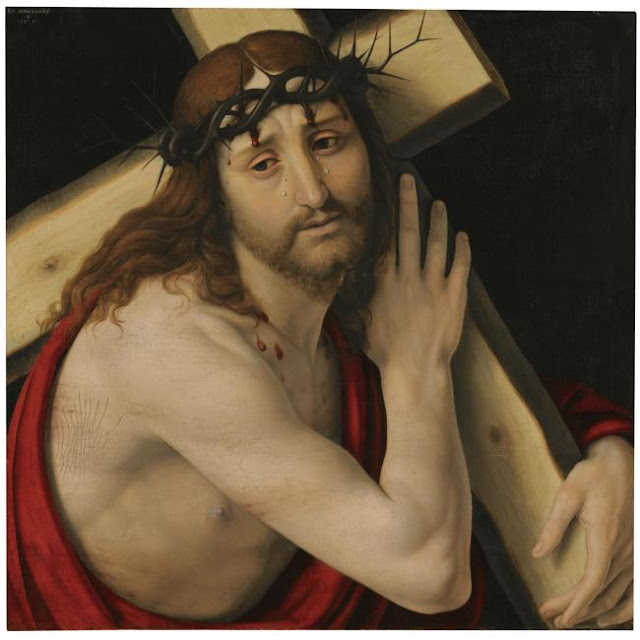 Tempera and oil on panel, transferred to canvas

The subject is taken from the Gospel of St. John (19:17), the only Evangelist who states that Christ Himself carried his cross

Solario introduces new dramatic language of expression and gesture together with an attention to detail to the subject.

He forms a new type of image, in which the tears and blood of Christ are rendered in the most intimate detail, and whose devotional purpose proclaims the words of Saint Matthew's gospel: 'If any man will come after me, let him deny himself, and take up his cross and follow me'.

The reduction of the theme to half-length and the viewing of the subject up close completely alters the impact upon the viewer and would help change the iconography of this subject for years to come.

Solario returned to this composition in years to come

Solario painted this while in Milan in 1505. Leonardo da Vinci woud have been in Milan at this time. Solario was a pupil of the genius. Some critics feel that the influence of da Vinci on this painting is particularly marked.

On the subject of crucifixes, Zenit publishes an article about a detailed response to the recent European Court of Human Rights judgement which forbids the exhibition of crucifixes in Italian classrooms:

"Real religious freedom is not freedom from religion, says a historian writing in response to this week's European court decision discouraging crucifixes in Italian schools.

Martin Kugler, an expert for the human rights network Christianophobia.eu in Vienna, offered 12 theses to unveil the mistaken thinking of the court, which decided in favor of an atheist mother who protested the crucifix in her children's school.

Kugler explained: "The right to religious freedom can only mean its exercise -- not the freedom from confrontation. The meaning of 'freedom of religion' has nothing to do with creating a society that is 'free from religion.'

"Forcibly removing the symbol of the cross is a violation on the same level as it would be to force atheists to mount this symbol.

"The blank white wall is also an ideological statement -- especially, if over the previous centuries, it had not been empty. A 'value-neutral' state is fiction, which is often used for propaganda purposes."

Kugler said that decisions like that of the European court actually attack religion, instead of fighting religious intolerance.

Furthermore, he affirmed, "one cannot fight political problems by fighting against religion."

And, "the majority of the affected population would like to retain the cross. It is also a problem of democratic politics, giving priority to individual interests so blatantly."

Finally, along the lines of the argument proposed by the Italian government in defense of crucifixes in its classrooms, Kugler said that "the cross is the logo of Europe. It is a religious symbol, but still much more than that."

In an article in Die Presse, Kugler gave further consideration to two elements of the church-state debate.

He said talk of a "value-neutral state" is "simply naive and the result of an illusion. [...] rather a joke."

"[A] value-neutral state? Against fraud and corruption? Against xenophobia and discrimination? Sins against the environment and sexual harassment in the workplace? A state that bans neo-Nazis, allows pornography, favors certain forms of developmental assistance, but others not ... all due to neutral values? Someone is trying to make a fool of us," he observed.

The scholar contended that a second point -- the assumption that a public without any presence of religious life or religious symbols would be more 'tolerant' or more appropriate to freedom of conscience than a 'Public Square' which permits or even encourages statements of religious belief -- deserves more consideration.

He proposed: "Of course, the atheist parent might feel his or her child being molested by the cross in the classroom. But this is inevitable. I may also feel annoyed when upon entering a post office I catch sight of a photograph of the Austrian federal president whom I have not voted for. [...] Influence, ideological signals, visual presences -- also sexist -- will always exist everywhere.

"The only question is how and containing what."

Kugler contended that in this regard, the state "should intervene only very moderately. And if it does, not by bans that imprison religion into a ghetto.""

The question that Europe has to determine is that whether its many crucifixes are simply aesthetic works of art fit ony for private display in homes or in churches (and then only for consenting adults) or in dry dusty museums devoid of context and true meaning, or whether it wishes to maintain its continuity with its Christian past where symbols such as the Crucifix were a part of every day life amongst its many peoples.