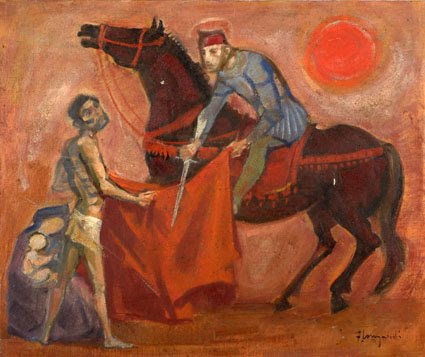 "While many miracles are attributed to him, St Martin is known most of all for an act of fraternal charity. While still a young soldier, he met a poor man on the street numb and trembling from the cold. He then took his own cloak and, cutting it in two with his sword, gave half to that man. Jesus appeared to him that night in a dream smiling, dressed in the same cloak.

Dear brothers and sisters, St Martin's charitable gesture flows from the same logic that drove Jesus to multiply the loaves for the hungry crowd, but most of all to leave himself to humanity as food in the Eucharist, supreme Sign of God's love, Sacramentum caritatis. It is the logic of sharing which he used to authentically explain love of neighbour."

Pope Benedict XVI Angelus: On Sunday, 11 November 2007 in St Peters Square, The Vatican about the Feast day of St Martin, Bishop of Tours