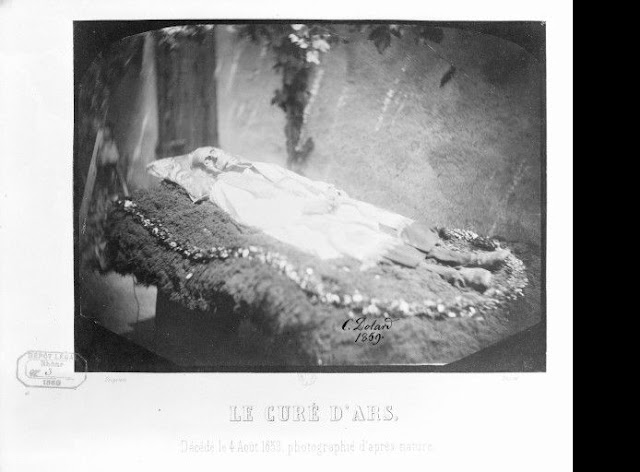 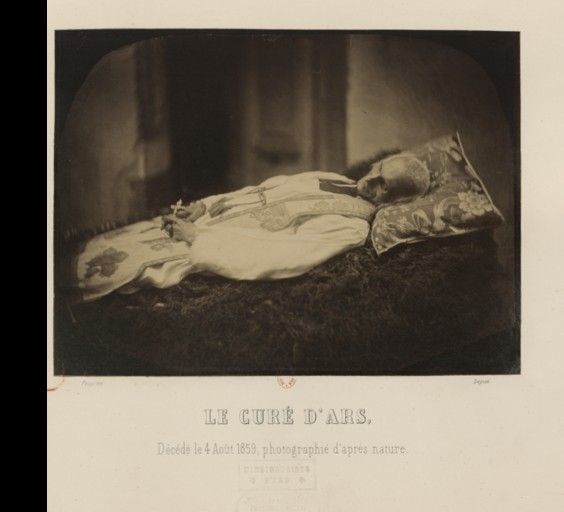 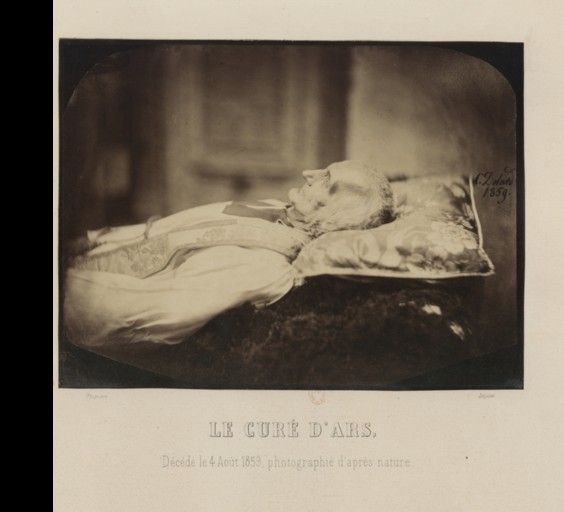 By 1855, the number of pilgrims who came to see him had reached twenty thousand a year.

Vianney yearned for the contemplative life of a monk, and four times ran away from Ars, the last time in 1853

When he died the above photographs were taken shortly after his death.

I have not seen the above photographs on the net before. Hopefully they may be of some interest in this Year of Priests declared in honour of the 150th anniversary of the saint`s death.

On 1st August 1959, Blessed Pope John XXIII issued Sacerdotii Nostri Primordia ("From the beginning of our priesthood") his second encyclical It commemorated the 100th anniversary of the death of St. John Vianney.

One of the features which Pope John picked out about St John Vianney was his devotion to the Eucharist:

45. The devotion to prayer of St. John M. Vianney, who was to spend almost the whole of the last thirty years of his life in Church caring for the crowds of penitents who flocked to him, had one special characteristic—it was specially directed toward the Eucharist.

46. It is almost unbelievable how ardent his devotion to Christ hidden beneath the veils of the Eucharist really was. "He is the one"—he said—"Who has loved us so much; why shouldn't we love Him in return?" He was devoted to the adorable Sacrament of the altar with a burning charity and his soul was drawn to the sacred Tabernacle by a heavenly force that could not be resisted.

47. This is how he taught his faithful to pray: "You do not need many words when you pray. We believe on faith that the good and gracious God is there in the tabernacle; we open our souls to Him; and feel happy that He allows us to come before Him; this is the best way to pray." He did everything that there was to be done to stir up the reverence and love of the faithful for Christ hidden in the Sacrament of the Eucharist and to bring them to share in the riches of the divine Synaxis; the example of his devotion was ever before them. "To be convinced of this—witnesses tell us—all that was necessary was to see him carrying out the sacred ceremonies or simply to see him genuflect when he passed the tabernacle."

48. As Our predecessor of immortal memory, Pius XII, has said—"The wonderful example of St. John Mary Vianney retains all of its force for our times." For the lengthy prayer of a priest before the adorable Sacrament of the Altar has a dignity and an effectiveness that cannot be found elsewhere nor be replaced. And so when the priest adores Christ Our Lord and gives thanks to Him, or offers satisfaction for his own sins and those of others, or finally when he prays constantly that God keep special watch over the causes committed to his care, he is inflamed with a more ardent love for the Divine Redeemer to whom he has sworn allegiance and for those to whom he is devoting his pastoral care. And a devotion to the Eucharist that is ardent, constant and that carries over into works also has the effect of nourishing and fostering the inner perfection of his soul and assuring him, as he carries out his apostolic duties, of an abundance of the supernatural powers that the strongest workers for Christ must have.

49. We do not want to skip over the benefits that accrue to the faithful themselves in this way, as they see the piety of their priests and are drawn by their example. For, as Our predecessor of happy memory, Pius XII, pointed out in a talk to the clergy of this dear city: "If you want the faithful who are entrusted to your care to pray willingly and well, you must give them an example and let them see you praying in church. A priest kneeling devoutly and reverently before the tabernacle, and pouring forth prayers to God with all his heart, is a wonderful example to the Christian people and serves as an inspiration."  The saintly Cure of Ars used all of these helps in carrying out his apostolic office, and without a doubt they are suitable to all times and places. "


Here are some excerpts of the words of Saint Jean Marie Vianney on The Eucharist and communion:

"All the good works put together do not equal the sacrifice of the Mass, because they are the work of men, while the Mass is a work of God.

There is nothing as great as the Eucharist.

Oh my children! What does Our Lord do in the Sacrament of his love? He took his good heart to love us, and extracts from this heart a perspiration of tenderness and mercy to drown the sins of the world.

There he is: the one who loves us so much! Why not love him!

The nourishment of soul and body is the blood of a God. If one thinks about it, one could lose oneself for all eternity in this abyss of love!

Come to communion, come to Jesus, come to live of Him, in order to live for Him.

The good Lord, wanting to give himself to us, in the sacrament of his love, has given us a great and profound longing that only he can satisfy.

Holy Communion produces in the soul something like a rush of air on a fire that begins to extinguish, but where there are still many embers!

When we began, if someone were to ask us: "What do you bring home with you?", we could respond: "I bring heaven".