The Pope`s discourse to Artists 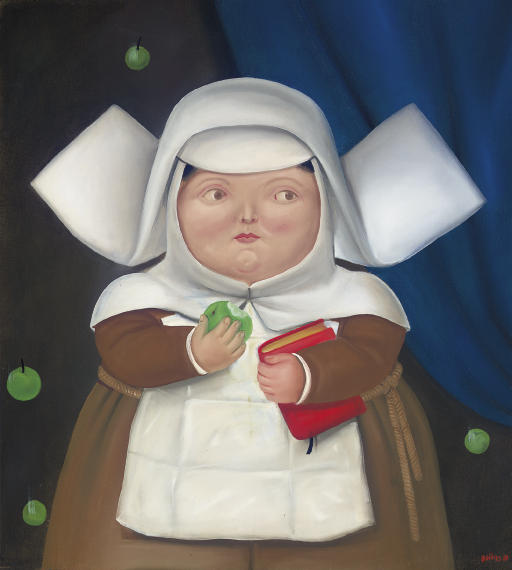 As regards the painting by Botero above, in a 1972 interview, Botero claimed, "I don't paint apples anymore. Oranges and bananas are the authentic fruits of the tropics. Apples are for snobs."

However 19 years later, he broke his rule in this sightly comic version of the tale of the origin of Original Sin.

In Nun Eating an Apple, the portly holy woman glances to the side as though just having been caught in a devious act. With a Bible in her left hand and the forbidden fruit in her right, she holds the forces of good and evil. Here evil seems to be winning out as the newly eaten apple remains slightly raised above the book.

The forbidden fruit appears in the background as well, floating or perhaps falling, on the far black wall. While calling attention to the importance of the apple here, these suspended green spheres also serve as a pictorial device

Last Saturday, the Pope addressed artists in the fabulous setting of the Sistine Chapel. I do not think that Botero was present but I could be wrong.

As reported in a previous post it was a rather thoughtful and serious attempt to persuade artists to rediscover their vocation as Christian and religious artists. To uplift culture from nihilism and the mire.

Her theme was the separation and divorce between Art and the Church. How did it happen ? She is quite fierce in her criticism of "the modern artist".

However I do not think that it is the whole story.

In former days the Church held the allegiance of artists by virtue of (1) its economic power in the art market; (2) artists regarded art as a vocation not simply as just a business; and (3) they believed in the message of the Church

Now art commissions by the Church are a small part of the art market.

Demand for art has increased as the populations became more educated and affluent. Bigger players include the art auction houses, Art Museums and Galleries, the universities as well as governmental bodies. There are alternative patrons: more powerful and wealthy than the church. Their message through their prestige and money is circulated through the powerful art media.

Commerce has discovered the value of art. Advertising is filled with creative artists. Art can sell goods and services. Banks, pension funds, foundations all have art collections. Art is a unit of wealth and prestige.

Art has become a commodity. Its value is determined by demand and supply. Everyone wants in on the action.

Despair ? Irreversible ? No. The Church is filled with good and committed people who truly and honestly beieve in its message. They may have to work harder than before to get the message over against hostile and indifferent players in the market. But truth and goodness always prevail. We have a Divine assurance to that effect.

"The Church was the greatest art patron for over a millennium, recouping the dying arts of antiquity, rescuing artists and their works from the mania of iconoclasm and offering the painters and sculptors of the Renaissance a chance to rise above their status of craftsmen and become "artists," people whose minds are as engaged in their works as their hands.

In this way the Church acted like a nurturing father, providing education and boundaries but also exhorting artists to cultivate their gifts, to learn and experiment and grow in their talents.

Patronage, derived from the Latin word for father, channeled man’s creative instinct and challenged it to the highest goals; representing the history of humanity and salvation, and encouraging their brothers and sisters to aspire to beauty in their lives.

Painters and sculptors thrived with the Church’s patronage, reaching the greatest pinnacles of artistic achievement, and earning the coveted title of artist. The Renaissance saw the masters of formal techniques such as fresco, stone carving, perspective or foreshortening become accepted as thinkers. They were enrolled among the prestigious liberal arts to stand as peers among the theologians, philosophers and mathematicians.

Flush with this achievement, the artists of the Baroque era rushed to defend the Church against the iconoclasm of the Reformation. Caravaggio’s powerful calls to holiness and Bernini’s harnessing of the supernatural though art and architecture illustrate a loving filial loyalty.

But as artists discovered their great potential to persuade as well as to confer social status, they increasingly experienced the nurturing environment of the Church as a constraint. The challenges became restrictions, the sacred stories grew stifling. Artists left the comforts of home to seek out new subjects. Nature, politics and pleasure called and artists used their finely honed talents to vividly explore the world around them. They tried to see in every aspect of nature and man the same greatness they had found at home in the Church.

At the turn of the 19th century, artists found a new subject that would captivate and enslave them: themselves.

As Freud offered man his own psyche as a principal frame of reference, the artist, like Narcissus, found himself lost in his own reflections. Soon he abandoned formal training, devoting his full attention to his own feelings and perceptions. Expressionists, Surrealists, Modernists became their own muses.

And so it came to pass that today’s angry, sulky, self-absorbed adolescents of art chose to provoke instead of persuade, titillate instead of stimulate, and rage instead of reason. And like many teens before them, they marked their maturity by rejecting their fathers. Producing a frog on a cross or the Blessed Virgin in elephant dung became "art." They ridiculed, disdained and desecrated their ancestral home in the name of an unspecified "freedom."

And as is the case with such adolescents, people stopped paying attention to them.

The Holy Father has been standing at the doorway -- Paul VI in 1964, John Paul II in 1999 and now Pope Benedict last Saturday -- calling out for their lost children and waiting with open arms for their return.

The real question is, when will the prodigal sons decide they have had enough of the pigsty? ...

Like the epic story of Michelangelo’s commission to fresco the vault of the Sistine Chapel, the valiant attempt to re-establish the dialogue between art and the Church last weekend had its moments of agony and ecstasy.

That artists found the initiative to ask to meet with the Holy Father brought a spirit of cooperation to the events, an openness on their part to seeing the Church with mature and appreciative eyes.

The Pontifical Council for Culture responded by inviting artists of all types; architects, musicians, authors, filmmakers, installation artists as well as painters and sculptors. Art historians know we have an interdisciplinary field; literature, music and space play a large part in many works of art. The opportunity for these men and women from their varied disciplines to unite amid the art of Michelangelo was like scattering seeds on the most fertile of soil to see what might grow.

Furthermore, the artists visited the extensive collection of Modern Art held in the Vatican Museums.

Hundreds upon hundreds of works testify to the popes' continued interest in their efforts while a few jewels by Van Gogh, Matisse and Chagall demonstrated that artists who had garnered fame and fortune in the secular realm had eventually confronted the tremendous legacy of sacred art.

The address of Benedict XVI evoked the spirit of patronage of old. The Holy Father praised the contribution of the arts to the Church’s “unvarying message of salvation." Emphasizing tradition and transcendence, the Pope described the true nature of “shock art” that “opens afresh the eyes of his heart and mind giving him wings, carrying him aloft." As the Sistine Chapel amazed and the Bernini’s Ecstasy of St. Teresa dazzled, viewers could glimpse the sublime of the supernatural, hidden just beyond their mortal eyes.

By contrast, the art that jolts people through say, a rotting cow’s head (Damian Hirst) or a porcelain effigy of Michael Jackson and his pet monkey Bubbles (Jeff Koons) offers nothing to bring man out of himself ...

The most jarring aspect of the event to the ears of this art historian was the repetition of the tired old mantra, “art must be free." Caravaggio was not free to do as he liked and when he did, his work was rejected. Bernini, Velasquez or Jan Van Eyck were not at liberty to execute any passing fancy. The idea that one might give a Gospel to an artist and then let his imagination run wild is very similar to suggesting that a theologian interpret the Bible in whatever way he feels is best.

But the excitement of anticipation has not deserted art completely.

In a brilliant spirit of engagement, the Vatican has proposed to set up a pavilion at the Venice Biennale, one of the most important contemporary art shows in the world. The proposed project would be scenes from Genesis, given to different artists to engage not only with the Biblical text but with the greatest themes man can consider: creation, evil entering the world, the first murder, the origin of love etc.

This challenging commission, inviting artists to look outside of their own experience and think in terms of universality is a first, important step toward the reconciliation of art and the Church."