Benedict on the Gothic 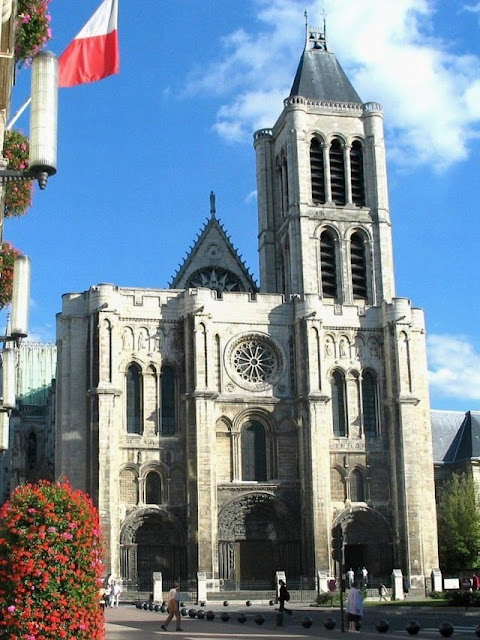 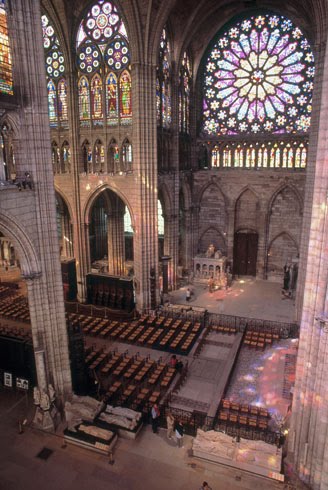 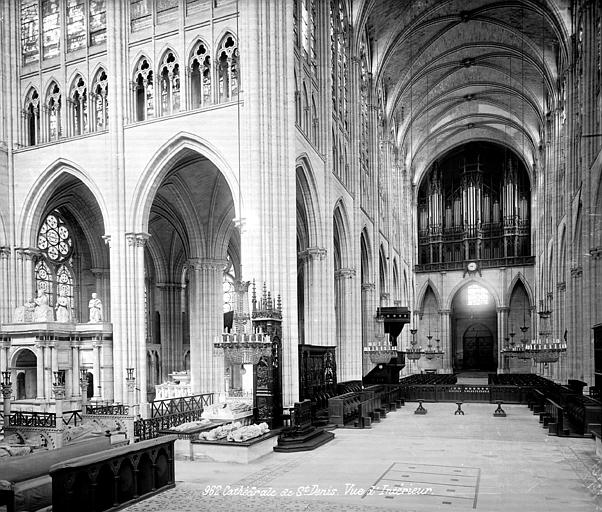 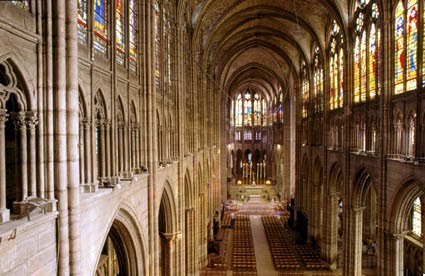 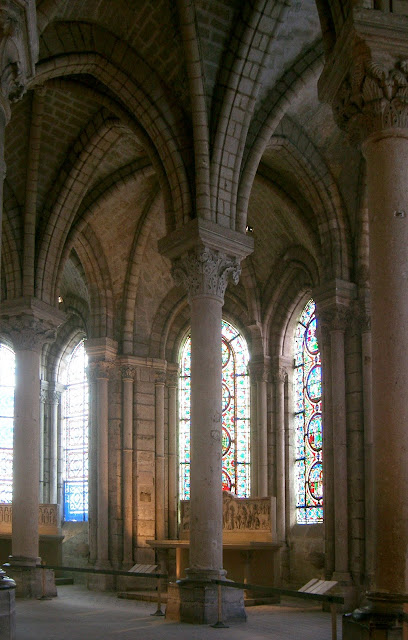 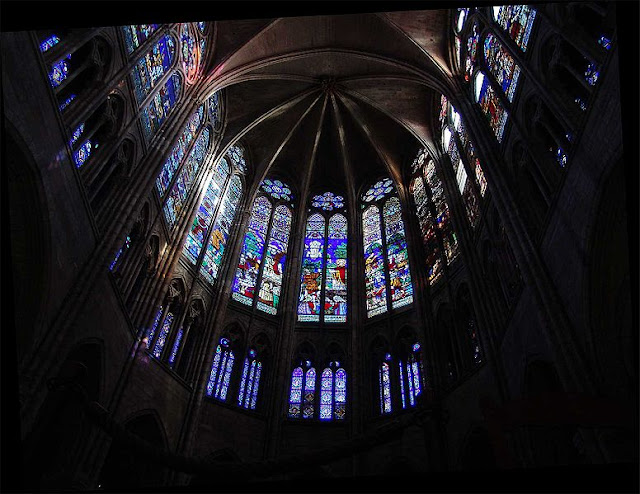 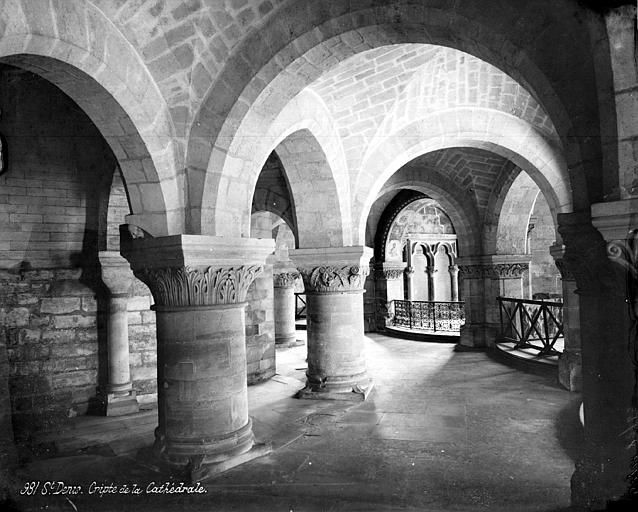 In the 12th century the Abbot Suger (c. 1081 – 13 January 1151), the chief adviser to the French King, rebuilt portions of the Abbaye de Saint-Denis, north of Paris using innovative structural and decorative features that were drawn from a number of other sources. In doing so, he is said to have created the first truly Gothic building (Panofsky, Suger and St Denis)

The basilica is also the prototype for the Rayonnant Gothic style, and provided an architectural model for cathedrals and abbeys of northern France, England and other countries.

The gothic architect drew much of their mathematical inspiration from biblical sources, the 12 supporting columns for each the ambulatory and choir of St Denis, make manifest Suger’s statement that they were "building spiritually... upon the foundation of Apostles and Prophets, Jesus Christ being the keystone that joins one wall to the other."

The new Gothic abbey designed under the Abbot Suger not only represented a splendid theology of light but one upheld and championed by the French crown.

The cathedrals aim was literally to manifest this radiance, both physically and spiritually. The church becoming transparent bathed and interpenetrated by "the Light of the Father".

"The whole church shines with its middle part brightened.

For bright is that which is brightly coupled with the bright,

And bright is the noble edifice which is pervaded by the new light."

Much of the inspiration during the Gothic period for a theology of light was drawn from Pseudo Dionysius, an eastern mystic of the 5th or 6th century AD. He blended Platonism, in which light is identified with the Good and the magnificent theology of light in the Gospel of St John, where the Word is compared "to a light that shineth in the darkness, by which all things were made, and that enlighteneth every man.

"Inspired by the Father, each procession of the Light spreads itself generously towards us, and, in its power to unify, it stirs us by lifting us up. It returns us back to the oneness and deifying simplicity of the Father who gathers us in... Jesus, the Light of the Father, the ‘true light enlightening every man coming into the world ...through whom we have obtained access’ to the Father, the light which is the source of all light. ... We must lift up the immaterial and steady eyes of our minds to that outpouring of Light which is so primal, indeed much more so, and which comes from that source of divinity, I mean the Father. This is the Light which, by way of representative symbols, makes known to us the most blessed hierarchies among the angels. But we need to rise from this outpouring of illumination so as to come to the simple ray of Light itself."


Pope Benedict XVI continued his talk on the Romanesque and the Gothic on 18th November 2009 thus:

"In the 12th and 13th centuries another kind of architecture for sacred buildings spread from the north of France: the Gothic.

It had two new characteristics in comparison with the Romanesque, a soaring upward movement and luminosity.

Gothic cathedrals show a synthesis of faith and art harmoniously expressed in the fascinating universal language of beauty which still elicits wonder today. By the introduction of vaults with pointed arches supported by robust pillars, it was possible to increase their height considerably. The upward thrust was intended as an invitation to prayer and at the same time was itself a prayer.

Thus the Gothic cathedral intended to express in its architectural lines the soul's longing for God.

In addition, by employing the new technical solutions, it was possible to make openings in the outer walls and to embellish them with stained-glass windows. In other words the windows became great luminous images, very suitable for instructing the people in faith. In them scene by scene the life of a saint, a parable or some other biblical event were recounted. A cascade of light poured through the stained-glass upon the faithful to tell them the story of salvation and to involve them in this story.

Another merit of Gothic cathedrals is that the whole Christian and civil community participated in their building and decoration in harmonious and complementary ways. The lowly and the powerful, the illiterate and the learned; all participated because in this common house all believers were instructed in the faith. Gothic sculpture in fact has made cathedrals into "stone Bibles", depicting Gospel episodes and illustrating the content of the liturgical year, from the Nativity to the glorification of the Lord.

In those centuries too, the perception of the Lord's humanity became ever more widespread and the sufferings of his Passion were represented realistically: the suffering Christ (Christus patiens) an image beloved by all and apt to inspire devotion and repentance for sins. Nor were Old Testament figures lacking; thus to the faithful who went to the cathedral their histories became familiar as part of the one common history of salvation. With faces full of beauty, gentleness and intelligence, Gothic sculpture of the 13th century reveals a happy and serene religious sense, glad to show a heartfelt filial devotion to the Mother of God, sometimes seen as a young woman, smiling and motherly, but mainly portrayed as the Queen of Heaven and earth, powerful and merciful.

The faithful who thronged the Gothic cathedrals also liked to find there, expressed in works of art, saints, models of Christian life and intercessors with God. And there was no shortage of the "secular" scenes of life, thus, here and there, there are depictions of work in the fields, of the sciences and arts. All was oriented and offered to God in the place in which the Liturgy was celebrated.

We may understand better the meaning attributed to a Gothic cathedral by reflecting on the text of the inscription engraved on the central portal of Saint-Denis in Paris:


"Passerby, who is stirred to praise the beauty of these doors, do not let yourself be dazzled by the gold or by the magnificence, but rather by the painstaking work. Here a famous work shines out, but may Heaven deign that this famous work that shines make spirits resplendent so that, with the luminous truth, they may walk toward the true light, where Christ is the true door". "