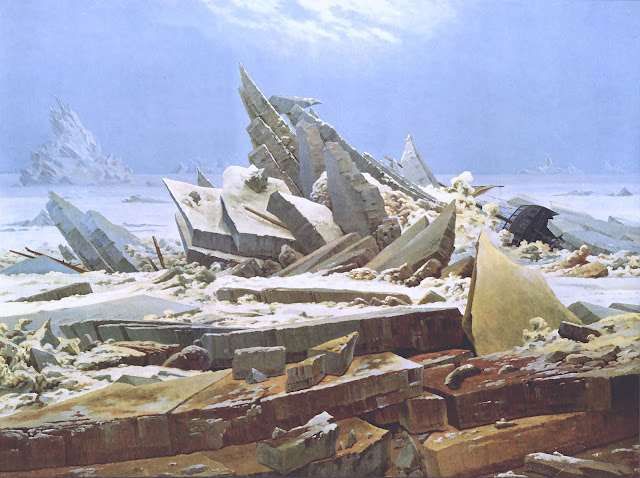 Caspar David Friedrich
1823–1824
Das Eismeer / The Ice Sea (The Arctic Sea) 1817
Oil on canvas
96.7 cm × 126.9 cm (38 in × 49.9 in)
Kunsthalle Hamburg, Hamburg
In Friedrich’s oeuvre landscape is imbued with an existential meaning, it becomes a metaphor for human fate
The landscape depicts a shipwreck in the middle of a broken ice-sheet, whose shards have piled up after the impact. The stern of the wreck is just visible on the right. As an inscription on it confirms, this is HMS Griper, one of two ships that took part in William Edward Parry's 1819–1820 and 1824 expeditions to the North Pole.

Sir Edwin Landseer (1802-73)
Man proposes, God disposes (1864)
Oil on canvas
36 x 96 in. (91.4 x 243.7 cm.)
The Royal Holloway, University of London, Egham, Surrey
Sir John Franklin was already a famed Arctic explorer by the time he sailed, in the spring of 1845, to find the Northwest Passage. Franklin’s expedition left Greenhithe on May 19th 1845 to tremendous rejoicing, fanfare and the cheers of jubilant, optimistic crowds. The rhetoric of the newspapers and the Admiralty inspired a belief that nothing could stand in the way of British science, expertise and ambition.
Last seen by a whaler as they entered Lancaster Sound in late July 1845, all their subsequent movements were enveloped in mystery until nine years later.
News of the Franklin expedition finally came in 1854 from Dr John Rae, an Orcadian working for the Hudson Bay Company. On a sledging expedition for the Company he had interviewed Inuit who had learned from other tribes that about forty white men had been seen in 1850, dragging a boat south along the western shore of King William Island, and that later in the season the bodies of those men were found, dead of cold and starvation.
Landseer’s work commemorated the expedition. But some critics at the time found it too ’harrowing’ , and productive of a ‘horror…beyond the aims of art’
The dark tones, savagery and futility depicted in Man Proposes, God Disposes knocked the self-confidence of an England at the height of Empire, brimming with the happy belief that English science, industry and character could conquer the world.
The title Man proposes  God disposes may come down to us as a direct translation from Thomas a Kempis,
In Chapter 19 of Book 1 :-

"For the resolutions of the just depend rather on the grace of God than on their own wisdom; and in Him they always put their trust, whatever they take in hand.
For man proposes, but God disposes; neither is the way of man in his own hands