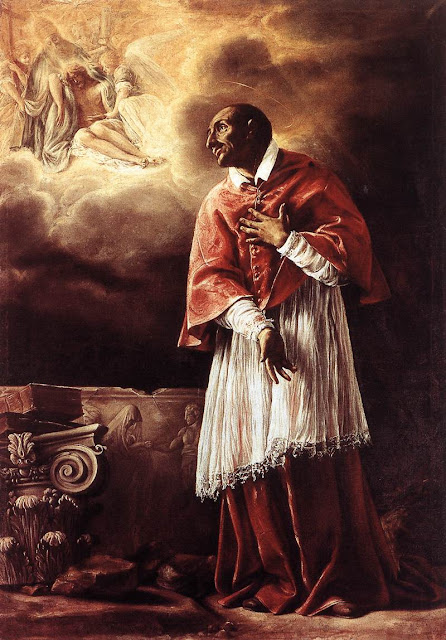 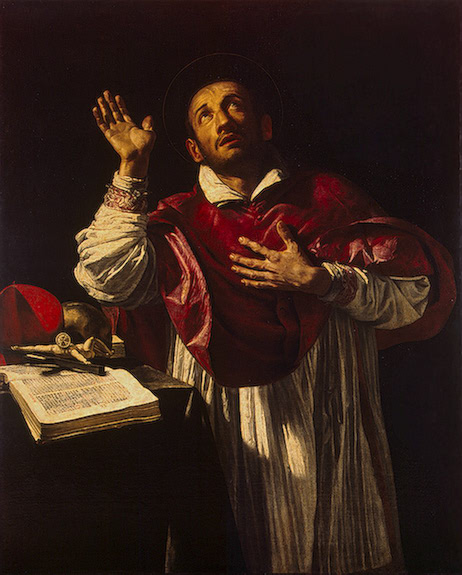 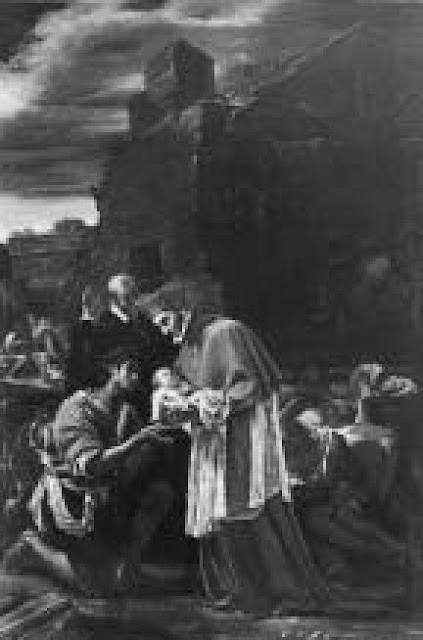 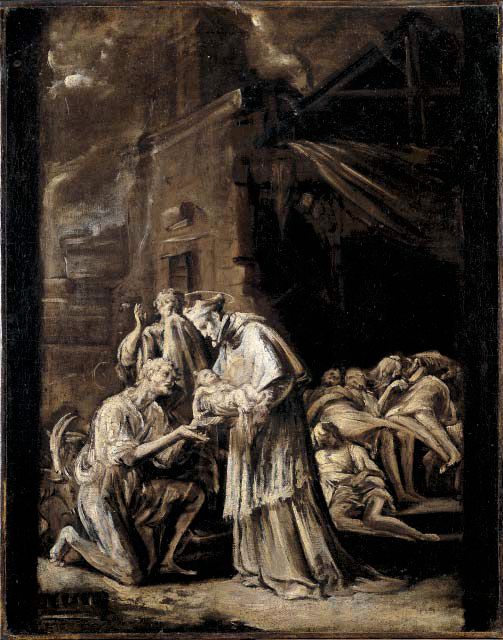 Saint Carlo Borromeo (1538-1584), bishop and cardinal, was one of the most active figures in the Counter-Reformation.

He organised hospitals during the plague epidemic and without fear of infection himself gave last communion to the dying.

Carlo Borromeo was particularly devoted to the Passion. He was canonised in 1610.

San Carlo alle Quattro Fontane, the church of the Discalced Trinitarians was one of the first churches dedicated to the saint. The church, the work of Borromini, is a jewel of Church architecture. It was meant to house the tomb of the saint. But of course he was buried in Milan

The first was for the church of San Carlo alle Quattro Fontane. It is not certain if it was meant for the main altarpiece. The present painting behind the main altar is the Devotion of St Charles Borromeo towards the Trinity by Pierre Mignard, which has depictions of Sts Charles Borromeus, John of Matha and Felix of Valois. (the latter two being founders of the Order). At present, Borgianni`s painting is in the refectory.

In this painting Borgianni shows the effect of the influence of Caravaggio.

The second is now in The Hermitage. In the Golitsynskij Museum the first painting was considered a work by Annibale Carracci, and after it was ascribed to Michele Desubleo. The shift of the attributions is very interesting for the history of taste; Borgianni is one of the first followers of Caravaggio, but this school was not in favour until the half of the twentieth century and the Baroque painters were not well known. Research is still going on into the provenance of this work.

The third painting is in the Church of the Curia Generalizia dei Padri Mercedari, in Rome. It was executed by the artist for the Mercedarian Fathers of Sant’Adriano in Rome and only placed in their modern house of worship near the Forte Boccea after the destruction of their church in 1936. The episode in question is taken from the episode of the life of Saint Charles Borromeo that while visiting the plaguestricken during the Milanese epidemic of 1576-1577, he gathered the youngest survivors in order to consign them to shepherds for nourishment, as one can see here.

Two goats’heads are visible behind and to either side of the kneeling shepherd. The figures are placed in an improvised shelter next to a ruined building

The study for the painting is a bozzetto for the painting presently at the Curia Generalizia. The painter was to replace the young boy holding his nose with the figure of a priest. Borgianni also felt the need to add a small background scene relating to the feeding of surviving children: one of the two children is suckled by a goat – and contrasts with the dramatic, poignant vision of the foreground

In the distance, a barely sketched-out structure recalls the Castel Sant’Angelo, showing that the artist has transposed the event from Milan to Rome. Further in the left foreground, a fragmentary capital evokes the architectural elements scattered through the Roman Forum.