God the Father, Saint Mary Magdalene, and Saint Catherine of Siena, has an inscribed date of 1509 and was given by Santa Pagnini to the Dominicans of Lucca.

It was painted following his trip to Venice, and critics have observed that the colour and especially the light have points in common with the art of Giovanni Bellini

The strong and vivid colour combinations are in part interrupted by leonardian "sfumato", the blurring of contours which is an indication of the early infuence of Leonardo da Vinci and his school on the young artist.

To stress the gulf between the divine and the earthly, Bartolommeo was among the first artists to replace contemporary costume with nondescript drapery. It became traditional artistic training that a clay or wooden model was covered in drapery that had been soaked in liquid clay. Left to dry, the drapery creases have a hard, sculptural quality which permits the artist to concentrate on capturing the light and shade on the folds of the material as it falls over a body. The technique probably originated in the workshop of Verrocchio (1435-88), and Fra Bartolommeo learned this technique from either Leonardo da Vinci or Lorenzo di Credi, both of whom had worked in Verrocchio's studio. See drawing below. 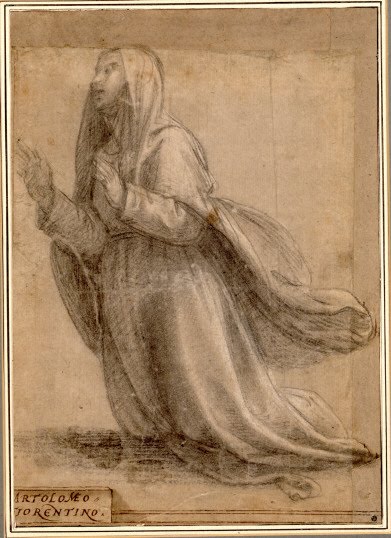 Mary Magdalene is immediately identifiable by her ointment jar and Saint Catherine of Siena by her Dominican black and white garments of Penance as well as the book and lily on the floor beneath her.

Two angels are holding a rosary across the centre of the painting while God is located in the upper portion of the composition holding a book with the letters Alpha and Omega. In the background we see a distant landscape

There is a trompe l'oeil element, this time a book close to the bottom of the picture; on it rests Catherine's attribute, lilies

There are three inscriptions:

at the right of Mary Magdalene’s head, NOSTRA CONVERSATIO IN COELIS EST, (our conversation is in heaven although we live on earth);

to the left of Saint Catherine’s eyes, AMORE LANGUEO, (a quotation from two parts of the Song of Songs 2:5 and 5:8); and

on the banderole, DIVINUS AMOR EXTASIM FACIT, (from the writing of Dionysus the Aeropagite)

Fra Bartolommeo was regarded as one of the most important artists of the High Renaissance from the late fifteenth-century to the beginning of the twentieth century, rivalling the reputation of contemporaries like Raphael

However the art historical world for the most part abandoned Fra Bartolommeo until 1961 when S. J. Freedberg addressed him as a serious artist of the High Renaissance

Fra Bartlommeo was a staunch supporter of Savonarola, and largely a religious painter

He was born Bartolommeo di Paolo del Fattorino but he was often referred to as Baccio della Porta.

He studied painting under Roselli. Vasari states that Bartolommeo studied the works of Leonardo as soon as he left Rosselli’s workshop. He entered into partnership with Mariotto Albertinelli.

He met Girolamo Savonarola, the Prior of San Marco in Florence in 1493

Reacting to perceived decadence, Savonarola instigated the “Brucciamenti dell Vanità” in February 1497 and 1498. Vasari reports that Baccio, Lorenzo di Credi and many other artists burned a number of their drawings and paintings of nude figures and non-religious books considered indecent to the frate

Savonarola was overthrown in May 1498. On July 26, 1500, Baccio della Porta entered the convent of San Domenico in Prato as Fra Bartolommeo

In Savonarola’s treatise “Il Trionfo della Croce” and in other sermons, he described the power of an image in two distinct ways. First, he believed that an image could help people remember divine things by not burdening the mind with constant sequential development. Second, he felt an image could represent a concept normally too profound to be comprehended in an easily perceived form.

In his sermon on divine love he said,

“Love is like a painter, and a [morally] good painter, if he paints well, greatly delights men with his paintings. In contemplation of the painting men remain suspended, and at times in this may appear to be in ecstasy and outside themselves and seem to forget themselves [as corporeal beings].”

Therefore, for Savonarola a “good painter” was able to unite the viewer with the deity through the painting, just as a good verbal image from a sermon might.

Savonarola felt the public nature of painting made it inherently dangerous and believed that painting should serve the sole purpose of achieving proximity to God. He was concerned greatly with the artwork present in churches, believing they contained too much artifice and ornamentation. Savonarola thought these qualities were undesirable and damaging because they distracted viewers from the ultimate purpose of the painting, the contemplation of God

In one of Savonarola’s later sermons he admitted that he was not initially a good preacher, concluding that his lack of success was due to the use of learned language and scholarly abstractions. He came to realise that in order to reach effectively his audience he had to supplement his rhetoric with imagery. It was noted that Savonarola’s sermons shunned artificial language, cadences and devices of eloquence, instead relying on everyday language that was natural and spontaneous and using rich imagery from everyday life. Savonarola’s messages were easily comprehensible through use of this effective imagery that linked the thrust of the sermons to something easily accessible to the common public.

Turning back to the painting above, we can see the influence of Savonarola.

The inscription NOSTRA CONVERSATIO IN COELIS EST is from St. Paul’s Epistle to the Philippians 3:20, a passage Savonarola referred to in his sermons eleven times between March 1495 and February 1498.

Savonarola encouraged his followers to "Go, look at Mary Magdalene who immediately [upon her conversion] had divine contemplation.” He urged his listeners to turn their conversation to heaven and away from earth as the Magdalene had done in order to achieve a greater connection with God through this contemplation.

The inscription DIVINUS AMOR EXTASIM FACIT, is originally found in the writing of Dionysus the Aeropagite whom Savonarola felt was one of the greatest mystic commentators.

Why the Saints ? Mary Magdalene was said to have been raised to the heavens seven times a day for seven years, and Saint Catherine’s early biographies note that she was so preoccupied with divine contemplation that her soul often drew her up towards heaven. Saint Catherine represents the active life and Saint Mary Magdalene represents the contemplative life.

Savonarola consistently referred to the Alpha and Omega (over 160 times) and saw it as representative of God as the beginning and the end, the first truth and ultimate purpose. This usage was not unusual.

Savonarola also frequently urged his listeners to contemplate the meaning of Ego Sum Alpha et Omega, (Book of Revelations 1:8, 21:6, and 22:13) saying that contemplation would produce a union of man and God. Savonarola believed contemplation would literally elevate man outside his world as he moved toward God

The centre of the painting is rather surprisingly occupied by Mary Magdalene’s ointment jar. Savonarola gives this object importance as well, mentioning Mary Magdalene’s ointment jar in his 37th sermon on Amos and Zechariah and stating it was representative of her heart, which became cold in her love for the earth after her conversion, relating back to the inscription by her head.

In addition, Savonarola mentioned that the alabaster material of the jar was a good insulator and therefore was able to conserve her love for Christ and “ungent of contrition” which further augments the inscription by her head

The medieval viewer read this painting in a circular manner beginning with God the Father who is blessing while passing his grace with his right hand to Mary who lowers her eyes and states to the viewer that conversation should not be directed to the earth but instead heavenly. We move on to Saint Catherine who is in ecstasy because of her love for God and therefore encourages rejection of intellectual and bodily pursuits through love and restores divine grace to its starting place. She is connected to God through her love for him, thereby completing the circle

“Although none of the images or inscriptions in the painting has its original source in Savonarola’s sermons, it cannot be merely coincidental that their combination into a total and cohesive image has a close parallel in the imagery and quotations used by Savonarola over and over again to express one of his primary homiletic subjects.“ (op. cit., page 85)