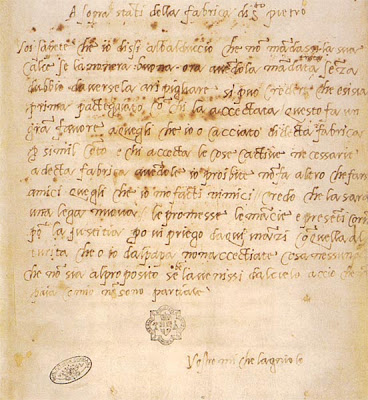 One of the most interesting parts of the Vatican Library website is the section on Manuscripts. There is a digital collection of some of the many priceless manuscripts within its walls.

Before then, he had been kept at a distance from the project by Bramante, Raphael, Antonio da Sangallo and then Giulio Romano (Raphael d. 1520, Peruzzi . 1536).

In the year of his appointment, he wrote to the Directors of the Fabric of St Peters to resist the widely diffused practice of corruption and not to accept any use of inferior materials for the construction and decoration of the basilica. The letter is above.

He had varying degress of success in his anti-corruption drive. The interests against him were too deeply rooted. The suppliers’ attempts at corruption continued and Michelangelo was obliged to continuously solicit the control of pontifical authorities.

But even a genius like Michelangelo could not defeat graft.

The cathedral was constructed according to Donato Bramante’s plan, but Michelangelo became ultimately responsible for its dome and the exterior of the altar end of the building.